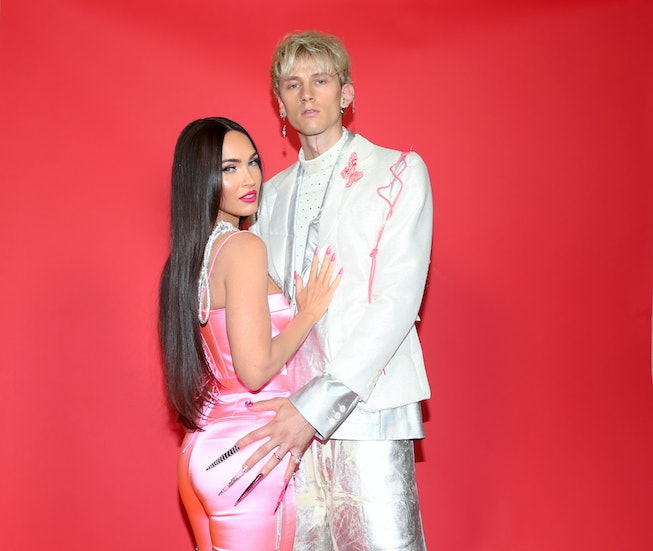 The Jennifer’s Body star shared a video of MGK getting down on one knee to propose to her, with a caption that perfectly encapsulates the whirlwind romance they’ve embarked on over the past year and a half, marked by outrageous red carpet outfits and declarations of weed-fueled love. She wrote:

We asked for magic

We were oblivious to the pain we would face together in such a short, frenetic period of time.Unaware of the work and sacrifices the relationship would require from us but intoxicated off of the love. And the karma.

Somehow a year and a half later, having walked through hell together, and having laughed more than I ever imagined possible, he asked me to marry him.

and then we drank each other’s blood.”

For his part, true romantic MGK shared a video of Fox showing off her two-stoned ring, which he says he created with British jewelry designer Stephen Webster and includes his and hers birth stones — diamond (his) and emerald (hers).

He gushed of the proposal experience: “beneath the same branches we fell in love under, i brought her back to ask her to marry me. i know tradition is one ring, but i designed it with Stephen Webster to be two: the emerald (her birth stone) and the diamond (my birth stone) set on two magnetic bands of thorns that draw together as two halves of the same soul forming the obscure heart that is our love.”

Congratulations to the happy couple!