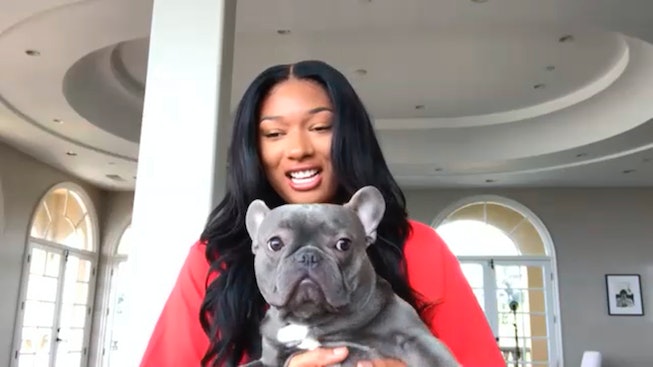 Megan Thee Stallion and Beyoncé made an important announcement on April 29: Just because we're in the midst of a pandemic does not mean Hot Girl Summer is on hiatus. The two Houston hotties linked up to release a killer remix of Megan's Suga banger "Savage," which featured Beyoncé dropping bars and proving once and for all that in addition to being one of the best voices of all time, she's also an immaculate rapper. The collaboration is a huge deal to Megan. First of all, duh, it's a Beyoncé co-sign. But secondly, Megan's late mother, Holly Thomas, was a big fan of Queen Bey, too.

"My mama was a really huge fan of Beyoncé," said the rapper over Instagram Live while wiping away her tears. "She used to make me watch a lot of Beyoncé stuff." Thomas passed away in March 2019, right as her daughter's career was beginning to ascend. Megan has been open about her mourning, and had initially wanted to release Suga on May 2 to honor her mother on her birthday.

"When I met her I didn't want to be like, 'Oh my God, Beyoncé, me and my mama love you. This shit is crazy, I can't believe we're meeting you,'" she reminisced with a smile. "It's just like...dawg. For Beyoncé to even do a some with me, I've really only been out for two years, this is the beginning of year number two. Beyoncé?! Beyoncé? Beyoncé. It's really crazy."

No one is more deserving.