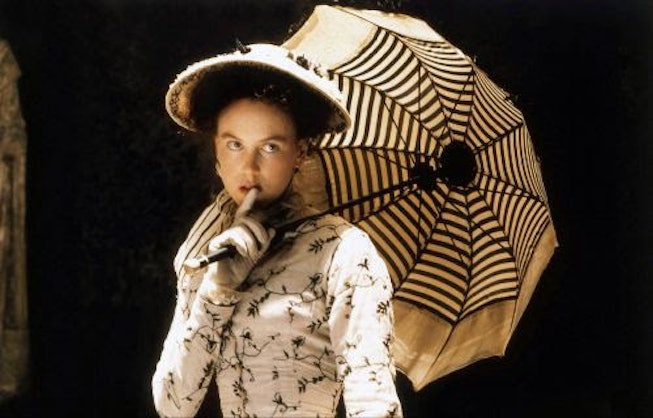 In America: An Anthology of Fashion, the currently-on-display exhibit at The Metropolitan Museum of Art’s Costume Institute, is only available to see for two-and-a-half more weeks. (It closes on Labor Day.) Perhaps you haven’t seen it yet and are now frantically trying to find a free day on your calendar, or, perhaps, you’ve seen it already but now are feeling eager to see it again. Either way, don’t fret. If you don’t get the chance to see the exhibit, you can at least head out to Metrograph starting September 2 to see some movies that will provide you a similar fashion education.

Titled An Anthology of Cinema, this upcoming “uniquely curated series” will play both at The Metrograph theater and virtually through Metrograph at Home. Described as a “vivacious cinematic journey through history that provides insights into the interrelationship of clothing, culture, and character,” this “happy meeting between The Met and The Metrograph” will include selections from buzzy and established directors alike, including The Forty-Year-Old Version’s Gotham Award-winning Radha Blank, Zola’s Spirit Award-nominated Janicza Bravo, Lost In Translation’s Oscar-winning Sofia Coppola, Daughters of the Dust’s AFI-winning Julie Dash, The Departed’s Oscar-winning Martin Scorsese, and Nomadland’s Oscar-winning Chloé Zhao. Met curators Andrew Bolton and Sylvia Yount have also made special selections for the series.

And, wow, those special selections are certainly cause for celebration. Classics like Scorsese’s The Age of Innocence (which Sofia Coppola describes as “a beautiful depiction of life in New York at that time”), Ousmane Sembéne’s Black Girl (which Radha Blank praises for its “literal frame for [lead character] Diouana’s gorgeous skin”), and Jane Campion’s The Portrait of a Lady (which Sylvia Yount claims “succeeds at rendering the inner lives and social agency of women with a sensitivity that continues to resonate”) are just a few of the critically-acclaimed films set to screen.

Speaking about the upcoming series, the Metrograph Programming Team said, “In this series, comprised of films handpicked by some of the greatest filmmakers of our time and spotlighting important works of cinema through the ages, we are introduced to a cross-section of times, places, and people. With An Anthology of Cinema, we aspire to show audiences how, no matter the art form — whether it’s a fashion vignette or a film — it all starts with a story.”

“Film is one of the enduring purveyors of American fashion, including the legacy of Golden Age costume designers like Adrian and Edith Head,” added Andrew Bolton and fellow Costume Institute curator Wendy Yu. “By aligning fashion with American characters and stereotypes, film continues to be an extraordinary vehicle through which American style is disseminated internationally.”

Learn more about An Anthology of Cinema before it opens on September 2 here.