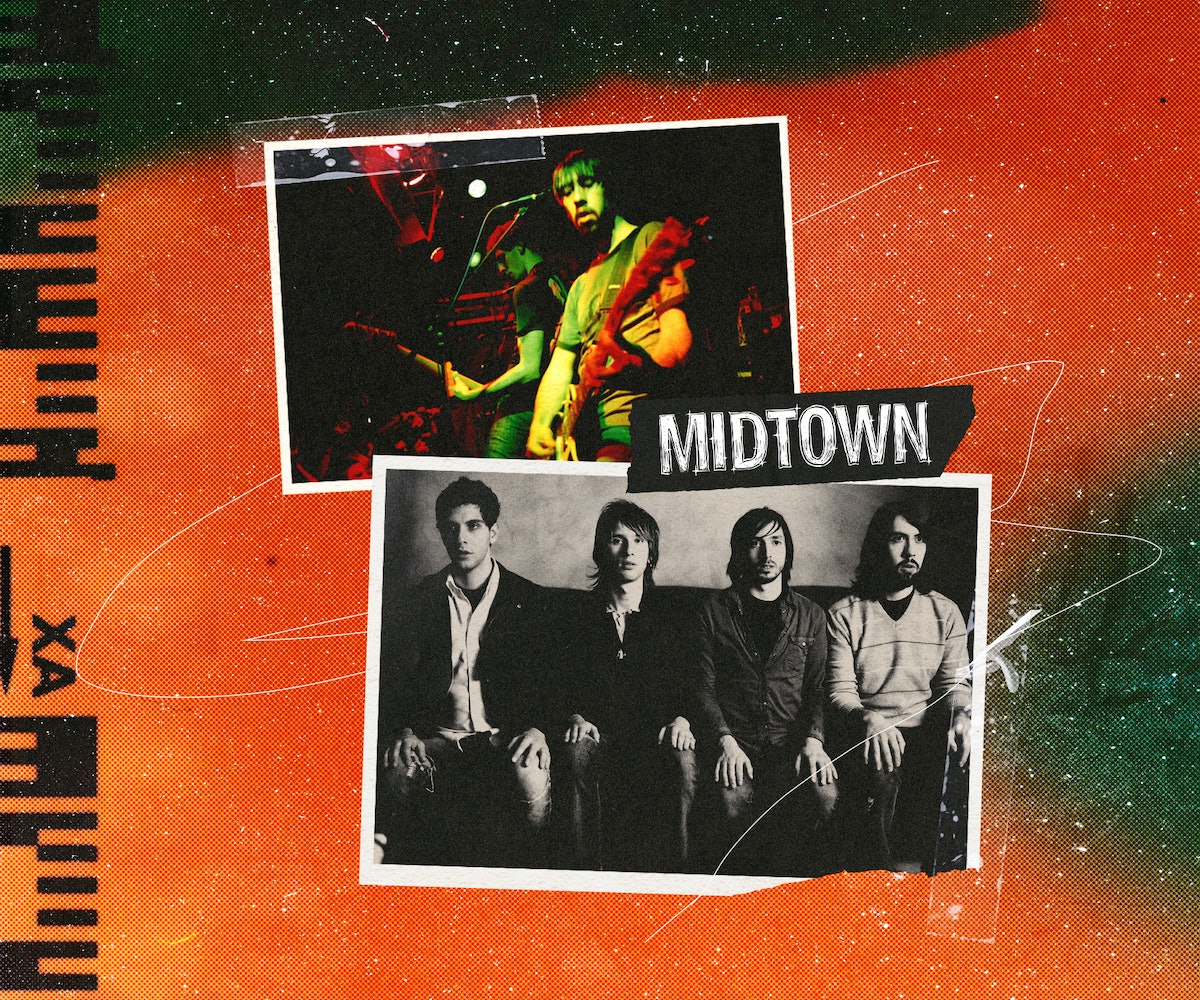 Is It Me, Is It True? Stop Waiting For the News. It’s Just Rock and Roll and You Should Know: Midtown is back! On Wednesday, the beloved New Jersey-born band announced that they will be reuniting for the first time in eight years to open for friends (and fellow emo icons) My Chemical Romance on a handful of dates on their upcoming summer tour, as well as a headlining home show of their own at the Starland Ballroom this December.

While the announcement marks the latest early aughts, MySpace-beloved band coming back together (see: Bright Eyes, Paramore, the aforementioned My Chemical Romance; basically the whole When We Were Young lineup), singer Gabe Saporta and guitarist Tyler Rann would like to clarify: this was no jump-on-the-bandwagon decision. It was all the way back in 2019, after reuniting briefly for the 2014 Bamboozle festival, when the idea of coming back together started to percolate. “We were talking about it by chance, and then the whole pandemic happened and we're just like, ‘Okay. Obviously, there'll be no shows for a while,’” Saporta recalls. “So it just went on the back burner.”

“Pre-COVID, we actually had a rehearsal,” Rann adds. “Gabe lives in LA, but the rest of us live in the New York area, so we did rehearse the three of us.” Saporta jumps in: “There, on the record! You see, we're not just jumping on a trend.”

Ultimately, the decision to bring the band back now boils down to one wholesome reason: their kids just discovered that their dads used to be rockstars (between Saporta, Rann, guitarist Heath Saraceno, and drummer, Rob Hitt, there are seven Midtown kids). Despite trying to keep their former gigs on the down low, their internet-savvy children started to put together the pieces — and now they want to see them perform. “My kids eventually caught on when one of my tattoos didn't wash away when I told them that they would,” says Rann. “The internet is an incredible thing. They started asking questions, "Why wouldn't you want to do this? And what's the deal with that? And who's that? Why is there a picture of you looking like that? Why did you have your hair like that?’ Now, I’ve walked by my son with his headphones on playing video games and he's full-on singing the lyrics to our songs, and that's a pretty cool feeling” Says Saporta, “My babysitter blew up my spot. She was driving the kids home from school and said, ‘Do you know what your dad did? Do you want to hear your dad's music?’ I think she played them Cobra Starship, which is very raunchy. I'm just like, ‘Listen to Midtown. They say nice words.’”

The questions didn’t stop, then finally came the one that also happened to be percolating on the internet for the past decade: When’s the next Midtown show? “Now that my kid is older, he's like, Dad, I want to go to your show,’” says Saporta. “I'm like, ‘I don't do shows anymore, bro!’ And he just says, ‘Now, I want to go to your show.’” While the kid-requested reunion was put on hold because of the pandemic, eventually a call from Mikey Way, the bassist of My Chemical Romance, put it back into motion.

“Mikey called me and said, ‘Dude, is Midtown getting back together?’ And I'm like, ‘How would you even hear something that?’ He's like, ‘Oh, I'm sorry. Am I not supposed to know that?’ I was talking to Tyler,’” Saporta recounts. “Then he says, ‘Well, would you want to do some shows with My Chem? And we're like, ‘F*ck yeah! That sounds like the best reason to get back together.’ We get to play with one of our favorite bands ... I still remember the first time I met them. Eyeball Records had just signed them and were like, ‘This is Gerard, he draws comics,’ and Mikey was this super shy, super nice guy. I was like, ‘You guys don't seem like rock stars, but cool.’ Little did I know ... And now our kids are going to see us play arenas. So the image that's going to be implanted in their heads: their dads being superheroes.”

“As your kids get older and they have these questions, then you start to question yourself,” adds Rann. “I really just felt like there's definitely a connection that you have with your friends when you're younger that you can never replicate ever again. It was this unbelievable experience that we got to have together when we were teenagers and into our twenties, and there's just something that felt unfinished about that opportunity. I personally really wanted the chance to do that one more time while we're all healthy and still have our hair. We used to do this as kids, and now we're going to do this with our kids. And that's pretty incredible.”

Saying yes was the easy part. Now, they actually have to do it. “I've got to go,” Saporta jokes when asked if they’ve started preparing, briefly exiting the Zoom frame, where he’s calling from his “man cave” in his Los Angeles home. “It’s funny, I don't play the guitar, ever, but I can immediately play every Midtown song pretty easily,” says Rann, who notes the three New Jersey-based members start rehearsing this weekend. “It’s muscle memory. We did these songs every day for so long, you just can't forget.” Saporta is less confident. “I think my brain doesn't work as well as everybody else's,” he says. “We'll get there, and we have enough time to make sure that it's great, but it's definitely not muscle memory for me. My brain is mush. When I close my eyes, all I see is a dirty diaper.”

Whittling down a catalog stretching five years and three albums into a tight 45 minute set will be the next challenge. “Can you tell me? I have no idea. Give me suggestions,” says Saporta. “These are tickets that have been sold for years. So we also want people not to be like, ‘Who the f*ck are these guys? This music sucks.’ We’ve got to figure out songs that they'll like, too.” Then there’s the matter of revisiting songs written in their adolescence, like the fan favorite “Hey Baby, Don’t You Know That We’re All Whores,” from the perspective as dads whose kids will be watching: “‘Is It Me? Is It True?’ has that part that goes, ‘Sex is old, old and boring.’ It's a big chanty part. My kid is like, ‘What's sex?’ So maybe [we cut] that one,” Saporta continues.

Of course, every new reunion begs the question: will there also be new music? The short answer? No. The long one? It’s complicated. “I asked Mikey the same question [about My Chemical Romance] and he said, ‘I feel a lot of times putting out new music can ruin the legacy of a band,’” Saporta says. “We get asked a lot, ‘How do you just stop? How do you stop making music, being an artist?’ I think we're all very creative and we get to still be creative in whatever we do. Part of the thing about writing music is that it helps you figure things out. It's like some kind of self-therapy. Now, we're all remarkably well-adjusted human beings for having been these crazy debaucherous people. That gives us a little bit of an impossible choice, which is write something that's authentic and true to who you are and end up with something that has nothing to do with the brand of what Midtown is and what Midtown was about. Or force yourself to go back into that space to write something, and then it feels false. And I think that's why it usually fails.”

“To be honest with you, it seems like a challenge enough right now to get ourselves to playing music together again. [New music] is not the focus or the goal right now. We want to go out there and play these songs again, and for us, everything old is going to feel new again. We want to do those songs justice,” Rann adds. “That being said, if after these shows, we look at each other and we're like, ‘The hell with this. Let's leave our families and go on tour,’ in our minds for a split second, we're going to be like, ‘let’s do this.’ And then we'll come back to reality.”