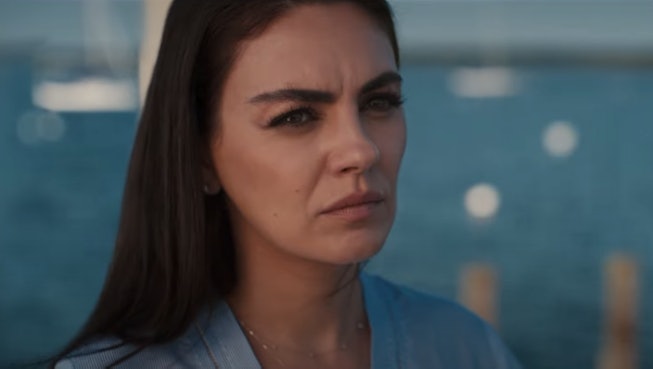 Ani FaNelli is this close to the life she wants, but that no one thought she deserved.

And when you’re a soon-to-be editor at the New York Times (whose boss calls your voice “peerless”), have an enviable wardrobe (all designer), and are preparing for a Nantucket wedding to a very wealthy man (in a “lavish but tasteful ceremony,” of course), why wouldn’t you think that?

Well, Netflix’s upcoming Luckiest Girl Alive may have some answers to that.

Directed by The Handmaid’s Tale’s Mike Barker and based on Jessica Knoll’s bestselling novel of the same name (Knoll also penned the script), Luckiest Girl Alive stars Golden Globe nominee Mila Kunis as Ana FaNelli, a “sharp-tongued New Yorker who appears to have it all.”

But that’s the thing about appearances — they can change in the blink of an eye. “When the director of a crime documentary invites Ana to tell her side of the shocking incident that took place when she was a teenager at the prestigious Brentley School, Ani is forced to confront a dark truth that threatens to unravel her meticulously crafted life.”

What that dark truth could be is anyone’s guess. (Unless you’ve read the book, in which case your guess is way more valuable than mine.) The film’s recently released trailer features flashbacks to Ani’s schoolgirl past, where Cruel Summer’s Chiara Aurelia plays the younger version of Ani. “People want to know: were you a hero or an accomplice,” asks the director about the incident. “Imagine what’s it going to be like when they find out about what happened,” another person (played by The White Lotus’ Emmy-nominated Connie Britton) ominously warns. “How could you not tell me about this?” her husband-to-be (played by American Horror Story’s Emmy-nominated Finn Wittrock) disappointedly wonders. “I’ve carried this horrible thing with me for years and it has built up this rage inside of me,” Ani respond to him. “I don’t know what’s me and what part I’ve invented.”

Well, that can’t be good news.

This is a big year for Mila Kunis. In addition to leading this film, the Black Swan scene-stealer also filmed for That ‘90s Show, Netflix’s upcoming spinoff of the popular Fox sitcom That ‘70s Show (arguably, the breakout show for the actress’ career). Reprising her role as Jackie Burkhart (albeit, an older, parent-aged version of her high school self), Kunis will be joined by many of her original castmates on the project, including her longtime partner and husband of seven years, Ashton Kutcher.

Getting paid to work with your husband and old friends? Maybe Mila really is the Luckiest Girl Alive.

Check out the trailer for Luckiest Girl Alive below before it hits Netflix on October 7.