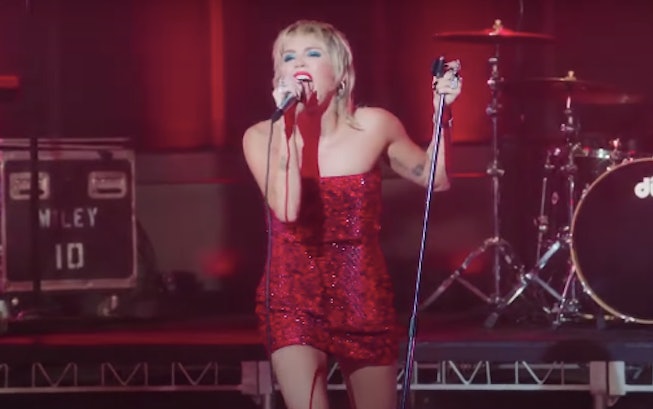 One of the many reasons that America loves Miley Cyrus, is that despite being in showbiz for the majority of her life, she's still a down-to-earth, cheeky, honest-to-God weirdo. She says what's on her mind — sometimes to the chagrin of her PR team, I’m sure — and it mostly ends up working out.

Cyrus brought some of that signature playfulness to her recent performance on The Tonight Show, where she performed her new She Is Miley Cyrus single “Midnight Sky” as well as a rousing cover of the 1982 Hall & Oates classic "Maneater.”

Jimmy Fallon was utterly delighted at the cover and Cyrus’ reasoning behind it was extremely on-brand. "I think it's very important to be transparent," she said. "I'm freshly single, so anyone watching that's my future ex-husband, just know, I told you."

"I'm just [like], just wear it all out in the open," she contined. "There's no skeletons in the closet, I warned you first." Future suitors, consider yourselves warned!

It was a harmless jab at herself, as well as recent ex-husband Liam Hemsworth. The two ended their marriage of eight months (and relationship of approximately a decade) back in August 2019, a process she told Joe Rogan “fucking sucked.”

"What really sucked about it wasn’t the fact that me and someone that I loved realized that we don’t love each other the way that we used to anymore," she explained. "That’s OK, I can accept that. I can’t accept the villainizing and just all those stories."

The She Is Miley album press cycle is in its infancy, so the cheeky jokes and vulnerability are just getting started. Until then, watch Cyrus chat with Fallon below.