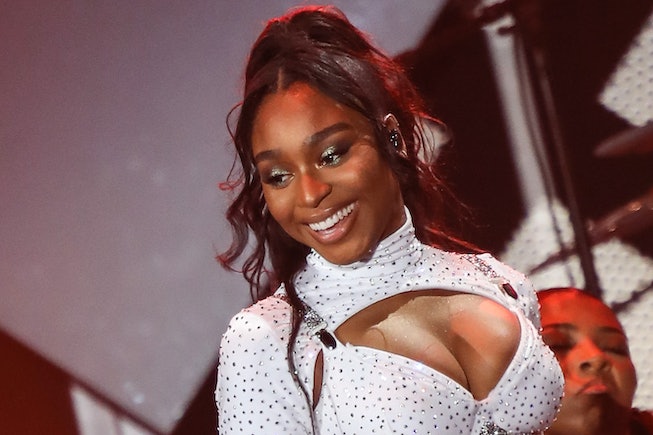 It's only been a few days since Cardi B and Megan Thee Stallion broke the internet with their star-studded music video for "WAP," but already the single has become the only thing worth talking about, setting Twitter ablaze with a sea of hot takes. Since its release on Friday, fans have been savoring every morsel of information they can find about this immaculate creation, whether it's Cardi putting on her director's hat to explain how the video will be filmed or memes about what Viola Davis would look like strutting through the corridors of the "WAP" Mansion. But nothing has gotten fans quite as excited as the reveal of a behind-the-scenes video of Normani nailing her complicated choreography in front of a green-screen.

In a music video that featured cameos from seemingly everyone — Rosalía and Sukihana to Rubi Rose and Mulatto — it was Normani's brief appearance that drew the most attention. While the others walked around looking fabulous, Normani imbued her brief camera time with some extra flavor by twerking, popping, and sliding down into a perfect split.

In the behind-the-scenes clip tweeted out by Cardi herself, the Bronx-born rapper records Normani doing the same routine we see in the video, except now, in front of a green-screen where we can hear Cardi (attempting to) sing the former Fifth Harmony member's hit single "Motivation" over the "WAP" instrumental.

Unsurprisingly, the video has elicited a slew of positive responses from fans. "It’s the way her face went from smiling back to serious for me," said @PayGrandee.

But the video also reignited a discussion about Kylie Jenner's inclusion in the video, which many were quick to call out immediately after it dropped at midnight on Thursday. As fans watched Normani bend and snap, they pointed to the video as further evidence that Jenner, who was given the longest cameo in the video, should not have been included.

"Normani did ALL this and Kylie walked down the hall and opened a door. If that’s not a perfect visual indication of Black women having to do the most and white women do the bare minimum to get somewhere, I don’t know what is," tweeted user @RhapsoDani.

In several since-deleted tweets, Cardi responded directly to the critique, denying that Jenner's appearance isn't about "race" and that she asked Jenner to be in the video because she "treated my sister and daughter so lovely at her kid bday party." So, there you have it. Be nice to Kulture Kiari Cephus and you, too, may get a cameo in Cardi's next video.