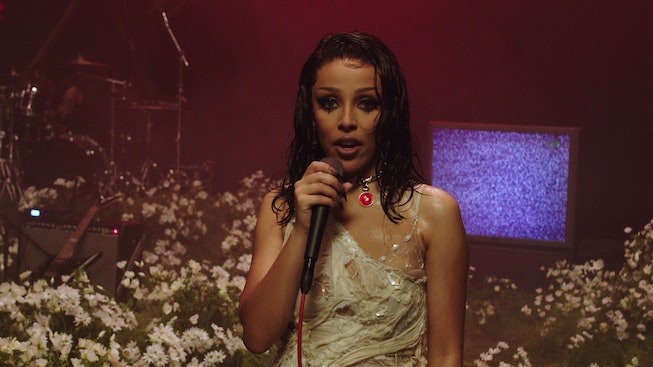 Courtesy of MTV via Getty Images

Now that we are collectively moving on from the 90s, y2k microgenres like nu-metal are popping up in our playlists just as quickly as teens preening to Kittie’s “Brackish” appear in our TikTok feeds. From pop stars to underground acts, the distinctive mishmash of nu-metal is wafting through the air. Some people are trying on the sound like the musical equivalent of rocking Tripp pants in a Instagram post, but others are embracing its sound and ethos wholeheartedly.

While the revival has been bubbling for a few years, with hyped bands like 100 Gecs covering Linkin Park, we’ve hit a new high. The same day 100 Gecs put out their cover, I caught a whisper of it in the hip-hop instrumental and ragged vocals on outro of Mod Sun’s “Flames (ft Avril Lavinge).” Last year I heard nu-metal when Alice Glass screamed over a jagged instrumental, made up of guitars? Synths? I can’t tell the difference, which I believe is the point.

Artists like Rico Nasty and Bree Runway have both dabbled into the aesthetic. The attitude was lurking in the confrontational Dorian Electra album My Agenda, and fully on display on Poppy’s I Disagree. When Chloe Chalviz quit singing to scream on “Daddy Don’t Take My Phone Away,” that was a 2020 nu-metal moment. Likewise with Doja Cat’s “Say So” performance at the 2020 EMA’s.

Nu-metal’s original heyday was the late 90s and early 2000s — the era that culture is currently mining for inspiration. Band Limp Bizkit was an early pioneer with their albums Significant Other (1999) and Chocolate Starfish and the Hot Dog Flavored Water the following year. Linkin Park exploded right at the same time with Hybrid Theory, before proving their staying power with Meteora in 2003. The more traditional band Korn was breaking big with the same sound.

This was a time when “alternative” music was a staple of pop radio, aided by the post-90s belief that previously underground genres (hardcore rap, heavy guitar music) could be marketed to the masses. The nu-metal sound took the post-grunge mangled guitars and merged them with hip-hop drum patterns and rapped verses.

This was not to be confused with pop-punk, another angsty guitar microgenre that was having its moment in the sun at the same time. Pop-punk had a similar outsider ethos but didn’t have the boldness of combining different sounds. Nu-metal is all about the combination: howling ragged vocals and shouted 8 bars over turntables, live drums and guitars falling in line to the structure of a rap sample before breaking loose. It’s a sound of boundary-breaking, and seemed to promise newness to people who were dissatisfied with the status quo.

Nu-metal bands helped a generation of kids tap into their discontent with the world and its stupid rules. The lyrics skewed dark: alienation, rage, abuse, even death. The outsider feelings natural in any (former or current) teen have only been exacerbated after watching our government utterly fail to effectively help its citizens during a pandemic, even as business tycoons like Jeff Bezos get richer and richer. A whole new generation is wise to how unfairly the world operates.

The genre's reemergence also makes sense considering how streaming and the internet have eroded traditional genre lines, something nu-metal's combination of hip-hop and hardcore pioneered. Now songs are grouped together on a playlist by mood or a loosely shared aesthetic, and it’s easier than ever to jump from one deep cut to the next. After hearing hip-hop’s influence on pop music for years, combining elements of rap to update guitar music doesn’t seem like such an unnatural idea to modern listeners. This collapse of differences results in musicians and audience members alike being primed for jumps in genre or style over the course of a single song.

Megan The Stallion is the biggest mainstream example of someone dabbling in the sound with last year’s “Girls in The Hood.” A TikTok mainstay from the jump, the track’s signature beat is a rework of Eazy E’s classic 1989 song “Boyz in the Hood.” Eazy E’s track predates the nu-metal rise by 10 years, yet encapsulates the unique mix of electronics, hip-hop, and heavy guitars that are the genre’s hallmark. As much as we associate howling bands like Korn with nu-metal, the term also encapsulates the more rap-akin “Butterfly” by Crazy Town. Megan’s take on the 1989 track brings the guitars sharper in the mix. It’s subtle enough that you’re not thrown into the mosh pit, but the whole thing is more aggressive. Lyrically Megan proudly claims existing on the fringes, crowing “Fuck being good/I'm a bad bitch” so irresistibly that "good girls" everywhere are scrambling to join her.

While Megan is topping the charts, the tastemaker pop artists have been dabbling in that sound for years. Most notable is Rina Sawayma, best known for early aughts-inspired pop before putting out "STFU!" in 2019. “It’s a song about releasing my rage against (racist) microaggressions,” Sawayama told The Guardian. The previous year Grimes put out “We Appreciate Power” with chugging guitars, theatrical organs, disembodied screams, and something that could either be turntables scratching or a group chattering demons. While Grimes got there first, Sawayama channeled the sound more purely in both sound and intent.

Still Grimes remained the person to call if you wanted to do a modern nu-metal song (it was how Poppy first tried). Last year budding popstar Ashnikko tapped Grimes to try her hand at the genre with “Cry.” Previously Ashnikko’s songs could have been Rihanna cast-offs, but her visual aesthetic always had a lot in common with nu-metal. She starts music video “STUPID” screaming at the camera, covered in the blood. With “Cry” she marries that inclination for violent visuals with a track full of of rage and ominous guitars. “I'm about to rip all of my hair out/Cause I'm madder than I've ever been,” Ashnikko snarls before belting a chorus that would make Chester Bennington proud.

While Ashnikko was content to tip her toes in the water and move on, 100 Gecs devoted themselves to the chaos. The songwriting/production duo of Dylan Brady and Laura Les use nu-metal as one of the many styles they reference. Songs like “Money Machine” and “800 db cloud” devolve into noisey Korn-eque breakdowns. Hip-hop cadences and attitude saturate everything the duo touches.

Most explicitly nu-metal is their previously mentioned cover/remix of “One Step Closer” by Linkin Park. The 100 Gecs version pays faith to the genre’s original hallmarks: heavy guitars, melodies interpolated with guttural screams, and even turntable scratches. However it wouldn’t be a 100 Gecs song if it went as expected, and the duo makes sure to interject several trace-like internals that sound more rave-ready than any Linkin Park song has before.

While clubland embraces nu-metal remixes, underground bands are doing the most earnest interpretation. The bands doing so most effectively take the alienation that the straight white men of nu-metal expressed and channel it into identity politics. Over in the UK, the band Nova Twins show the most promise. Rage Against The Machine guitarist’s Tom Morello tweeted they were “the best band you’ve never heard of.'' The duo are embracing and adopting the outsider ideals present in alternative music and applying it to the genre’s scene of white dudes. “I’m gonna take your crown!” Amy Love crows on the band’s song “Taxi” itself the most powerful example of a modern nu-metal song. Across the pond the NYC duo Deli Girls included a cover of Korn’s “Faget'' in their 2020 album BOSS. Where Korn’s vocalist Jonathan Davis was railing against the way the world calls men who go outside norms gay, Danny of Deli Girls rails against the rules of binary gender altogether.

This outsider attitude is why young kids are latching onto these new and old nu-metal bands alike. If you sift through the misogyny of some of the groups’ lyrics, a non-binary teen will discover lines like “Hey ladies, hey fellas, and all the people who don’t give a fuck!” from Limp Bizkit’s song “Rollin”. The futuristic sound of nu-metal remains a promise of a nu world order where freaks come first, at last.