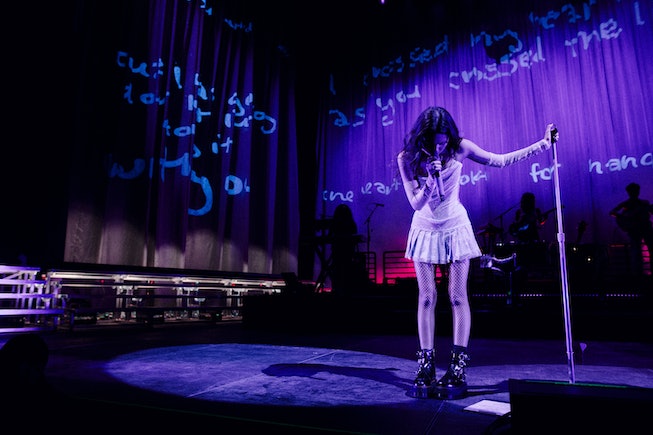 Before Olivia Rodrigo took the stage on Tuesday night in Portland, Oregon to kick off her Sour Tour, the venue piped in her carefully curated pre-show mix. Consisting mostly of songs released 20 to 25 years ago, it was interesting to see which ones the teen-dominated audience was familiar with. “Criminal” by Fiona Apple? Nope. “Lovefool” by The Cardigans? Yes. “Everywhere” by Michelle Branch? Extremely yes. “Maps” by Yeah Yeah Yeahs? Crickets.

The 19-year-old star’s love for the loosely defined era of pop culture that was on its way out by the time she could ride a bike is no secret. She tapped Dan Nigro, formerly of mid-’00s alt rock/emo group As Tall As Lions, to produce and co-write much of her debut album. She retroactively granted Paramore’s Hayley Williams and Josh Farro writing credits on her hit single “good 4 u” after it garnered comparisons to their 2007 hit “Misery Business.” She has pictures of Gwen Stefani and Alanis Morissette taped up in her house. And on Tuesday night, those time-honored inspirations and one of Gen Z’s foremost poster children collided for a cathartic show that felt like a time-warped version of my childhood.

The purple velvet curtains pulled back to reveal Rodrigo in a Freaky Friday-esque fit with blue-and-green plaid Tripp pants and a fishnet top as her all-female band chugged out a beefed-up version of her rocking album opener, “brutal,” a wall of silver streamers behind them. The hour-long set had the band primarily jumping between two moods: the pop-punk bounce of songs like “brutal” and “good 4 u,” and the power ballad heft of “drivers license” and “happier.” Rodrigo stepped over to the grand piano or picked up an acoustic guitar to take the lead during quieter moments, like “hope ur ok.” Having a five-piece band (not counting Rodrigo) allowed for nice flourishes that don’t appear on the album, such as a pedal steel guitar on “favorite crime” and several slick, well-rehearsed guitar solos. But outside of those additions, the 11 Sour cuts were largely by-the-book recreations. This being Rodrigo’s first-ever tour, that’s understandable — you’re not gonna snatch the rug out from under your fans before they’ve had the chance to experience the hits note-for-note live.

Becoming dizzyingly famous amid a global pandemic, Rodrigo’s in the strange position of having played more late night shows and award ceremonies than actual concerts. Her greenness was apparent on Tuesday night — not because of any jitters or noticeable flubs, but because of her wide-eyed excitement. “I used to pretend to do this in front of a crowd like you guys,” she told the audience. It was heartwarming to see a star come face-to-face with her true fans (and not a room full of industry brass) for one of the first times, an experience Rodrigo called onstage, “the most magical moment of my whole life.” She’ll get better at stage banter, but she already seems to have mastered trolling. The show opened to a soundtrack of One Direction’s “Olivia” playing not one, not two, but three times, after which the band began “brutal” with multiple false starts. The only time Rodrigo fumbled a lyric was during the first “drivers license” verse, and it was clear from her facial expression that this was only due to her sheer awe at the number of people singing along.

More than anything, it was incredible to experience Olivia Rodrigo alongside thousands of kids who clearly feel like she speaks for them.

Apart from the standard features of a younger audience — screaming, even more cell phone filming than usual — the youthful crowd reflected Rodrigo’s new spin on twenty-year-old trends. Butterfly hair clips are a thing again; people make finger hearts with their index and middle fingers, rather than their thumb and index now; teens somehow still know every word to Natalie Imbruglia’s “Torn.” But more than anything, it was incredible to experience Olivia Rodrigo alongside thousands of kids who clearly feel like she speaks for them. Her song “enough for you,” in which she questions if she’s good enough for a demanding, callous partner, cuts even deeper when you notice that every girl in sight can seemingly relate. Even opener Gracie Abrams was fangirling. She told the crowd, “I just can’t wait for Olivia,” and later on during Rodrigo’s set, she was perched by the mixing board singing every word to “traitor” and filming the opening minutes of “deja vu.”

The show was a reminder that everything comes in cycles. The music and fashion that one generation wishes they could forget — as well as the cultural artifacts that the same generation holds dear — are all fair game for the next one, to embrace as they see fit. This is how you end up with Rodrigo’s two covers of the night coming from ‘90s and ‘00s rock heroes Veruca Salt (“Seether”) and Avril Lavigne (“Complicated”) — the latter being a pop star who some Gen Xers might argue commodified their entire alt-rock vibe. What remains constant through all of this churn is young artists who seem to possess telepathic connections with their fans which, regardless of major label machinations and star-making industries, is the closest thing pop culture has to a “cream rises to the top” blueprint. No matter how much you pick apart Rodrigo’s fondness for turn-of-the-millenium ephemera, you can’t take that superpower away from her.