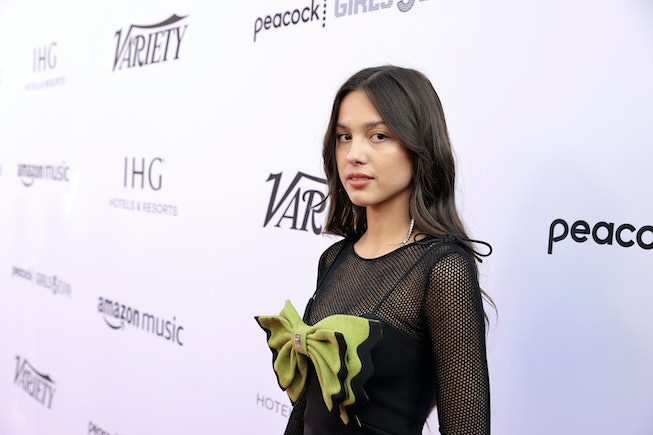 Olivia Rodrigo is having quite the year. After releasing her debut-album Sour, winning three VMA’s (Best New Artist, Song of The Year, and Push Performance of The Year), and nabbing six Grammy nominations, the singer-songwriter has announced her first tour. Starting next spring, Rodrigo will perform live in venues throughout the United States and Europe.

This morning, Rodrigo shared the news of her upcoming tour on her social media platforms. The Sour Tour will celebrate Rodrigo’s hit-album of the same name, which was released on May 21st. The 11-track record is the singer's first, and mostly covers a painful breakup with her rumored ex-boyfriend and co-star Joshua Bassett (who has recently released an EP detailing his own version of their story). Upon its release, Rodrigo became a pop-punk megastar, receiving nods from music icons like Taylor Swift and Alanis Morissette while racking up millions of fans worldwide.

Joining Rodrigo on tour are three rising artists: Gracie Abrams, Holly Humberstone, and Arabella Latham (who performs under the stage name Baby Queen), who will switch off as opening acts. Humberston — the youngest of the trio — is a British singer who released their first EP, The Walls Are Way Too Thin, on November 12th. Earlier this year Abrams dropped her EP titled, Minor on July 14th. Meanwhile, Baby Queen is a South African singer who debuted her first full-album The Yearbook on September 3rd.

Tickets for the Sour tour go on sale this Friday (December 10th) at 10am local time. You can purchase tickets directly through the singers website, and register for early access. The highly-anticipated event kicks off on April 2nd in San Francisco and concludes on July 4th in Birmingham, United Kingdom. Look below to see when Rodrigo will visit a venue near you!

April 5th - Portland, OR / Theater of the Clouds at Moda Center

May 20th - Las Vegas, NV / Chelsea Ballroom at The Cosmopolitan