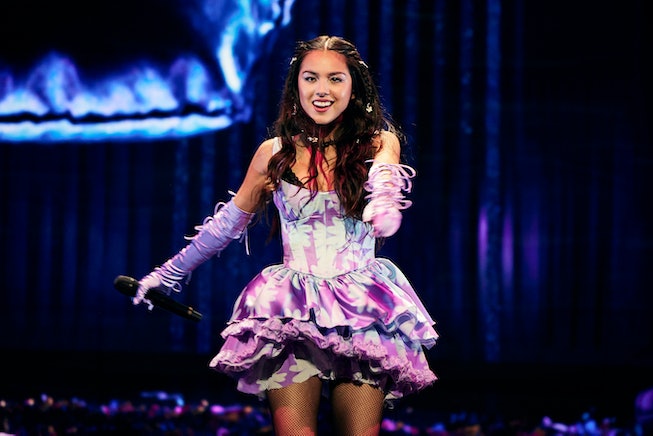 Olivia Rodrigo brought prom to her VMAs stage debut with an energetic performance of her hit song “good 4 u.” With a stage setup that looked like a dreamy high school gym that’s been outfitted for a dance, Rodrigo descended to the stage on a cloud of disco balls before breaking out into the pop-punk breakup anthem, all while dressed in a corset mini-dress with matching lace-up gloves. To say the crowd went crazy is an understatement; see clips of her performance below.

It was a momentous night for Rodrigo, who entered the night with five nominations including Song of the Year for her record-breaking debut single “drivers license,” which she won. She is also nominated for Artist Of The Year — an impressive feat for the first-time nominee who released her debut album, Sour, in May. The intimate project, which spanned pop, rock, and punk genres and explored the bitter feelings after a breakup, broke tons of records upon release and became the biggest album debut of 2021 at the time — though that title has since been claimed by Kanye West’s Donda.

In an interview with NYLON, Rodrigo said of the record and its songs: “That’s a cool thing about the record, too, is that it talks about some things that are uncomfortable to talk about, especially as a young woman. You're not encouraged to talk about how insecure, and jealous, and angry you feel. Music is an awesome medium for people to get to express those feelings without the fear of judgment, or being viewed as bitchy, or whatever sexist thing people want to say.”

The 2021 VMAs took place on Sunday, September 12 at the Barclay’s Center in New York with Doja Cat as host. See the full list of nominations here.