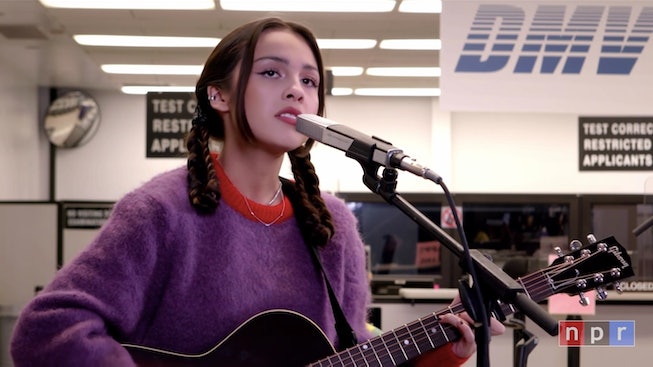 Olivia Rodrigo began her 2021 in the dusty fluorescent hallways of the DMV, and now, she’s ending it there. The pop star’s first NPR Tiny Desk Concert has arrived, and fittingly, Rodrigo set the show inside the empty waiting room of a Department of Motor Vehicles location — the Glendale DMV, specifically — a full-circle moment that highlights just how far she’s come since getting her drivers license.

Keeping in line with the Tiny Desk tradition, Rodrigo debuted stripped-back, acoustic versions of her hit Sour tracks for her four-song set, offering up a different sonic side to her heartbreak anthems. Backed by her band, she opened her set with a softer but still energetic version of “good 4 u,” before moving on to “traitor,” which she introduced as her favorite song from the album at the moment. After, she slowed things down more with a solemn performance of “drivers license,” featuring just her and a keyboard. Rodrigo ended her set with “deja vu,” the spiky, electronic song serving as an enthusiastic exclamation point at the end of her set.

Talking briefly to the camera at one point, Rodrigo said, “I’m so honored to be here, I watch these all the time they’re so cool. And right now we’re in a real life DMV which has some interesting vibes to it.”

This has been an extraordinary year for Rodrigo, whose unprecedented rise to superstardom began just eight days into 2021 when she released her first-ever single, “drivers license.” The song, bolstered by TikTok virality and its story of a real-life love triangle, broke records, and shot the young actress and songwriter to the world’s stage. In May, Rodrigo released her debut album, Sour, also to critical acclaim. Tracing the messy aftermath of a breakup through punk-pop, rock, and pop songs, Sour has now netted Rodrigo a slew of Grammy nominations, including one in each of the “big four” categories: Album of the Year, Record of the Year, Song of the Year, and Best New Artist.

Watch her Tiny Desk concert below, and revisit NYLON’s cover story with Rodrigo.