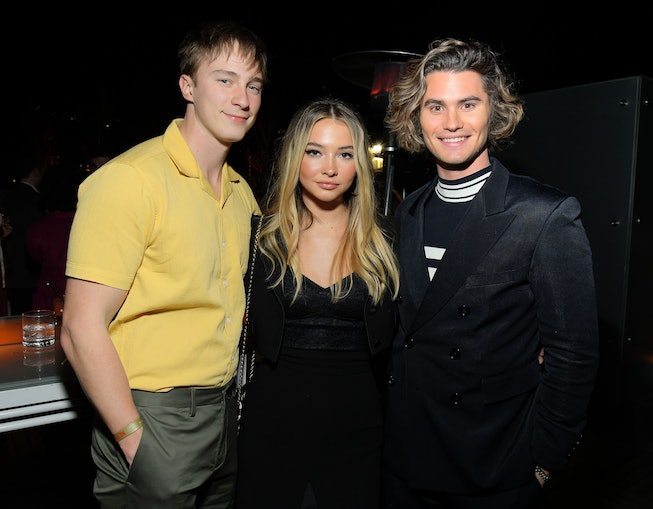 On Outer Banks — Netflix's surprise hit series about teens living on a small beach town, finding treasure, and fighting with rival groups — 27-year-old Chase Stokes stars as John B, the ringleader of the working-class "Pogue" surfing crew. 22-year-old Madelyn Cline, meanwhile, stars opposite him as Sarah Cameron, his on-screen romantic partner and an ostensible member of the "Kooks," a group of wealthy kids that mostly think they're better than everyone else. Because of the class indifference, their relationship becomes a classic case of forbidden love, and it unsurprisingly sparked fervor amongst the fandom. Apparently the fans had the right idea because, as a recent social media post confirms, the pair are also dating in real life.

The confirmation comes by way of an Instagram announcement Chase posted over the weekend. The post included a carousel of two different pictures taken at the beach during prime sunset hour. In one, all we can see are their legs as they sit next to each other, only separated by some rather delicious-looking Mexican food. The other is of Madelyn herself, smiling as she holds out a bottle of wine. "cats outta the bag," the caption read, with a red heart tacked on the end just in case anyone was confused about what cat, exactly, was being let out.

The post, which has racked up over 2.1 million likes in its first 15 hours, was commented on by many associated with the show. Cline herself commented twice, first saying "I’ve fallen and I cant get up," and then, "Topper punching the air rn," referring to her ex-boyfriend on the show.

Even some of the wealthy Kooks joined in to celebrate the lovely couple. Austin North, who plays Sarah's ex-boyfriend Topper, wrote, in all-caps, "YES SIR," while Drew Starkey, who plays Sarah's older brother Rafe, added, "Adopt me plz."

If this isn't proof that life imitates art, I don't know what is.