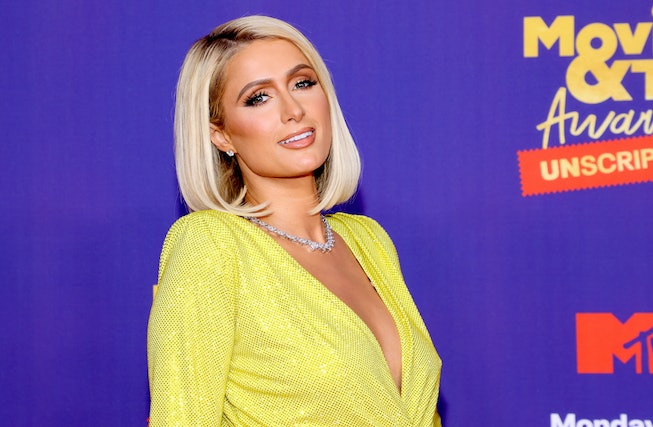 Paris Hilton has confirmed that she is not pregnant, as first reported by Page Six. The businesswoman said on her podcast, This Is Paris, that she is waiting until after her wedding in 2022 to conceive, and doesn’t know how the rumor started — but thinks it might be because she was wearing a new push-up bra. “The only thing in the oven at the moment is my ‘Sliving Lasagna,’” she said.

Hilton revealed in January that she’d been undergoing IVF treatments. The next month, Hilton and Reum, a venture capitalist, got engaged after dating for a year.

“I am excited about this next chapter and having such a supportive partner,” Hilton told Vogue at the time of her relationship with Reum. “Our relationship is one of equals. We make each other better people. He was absolutely worth the wait!”

Hilton made her relationship with Reum Instagram official in April of 2020, writing, “Happy Anniversary my love. My favorite thing to do is make memories with you. Your kisses are magical. I love being yours and knowing you're mine.”

Back in January, Hilton opened up to Mara Schiavocampo on “The Trend Reporter with Mara” podcast about her relationship and plans for a baby.

“He just my dream guy… [Carter’s] 100 percent [the one],” she said. “We talk about [planning a wedding] all the time and planning our baby’s names and all of that. So, I’m really excited to just move on for the next step of my life, and finally just have like a real life.

Hilton added: “We have been doing the IVF, so I can pick twins if I like. Kim [Kardashian] is actually the one who told me about that. I didn’t even know anything about it.”

Hilton has been busy the past year, announcing the release of a forthcoming, “searingly honest” memoir, speaking out on her experiences at an abusive boarding school and more in her documentary, This Is Paris, and even landing her own cooking show on Netflix, which hits the streaming service next month.