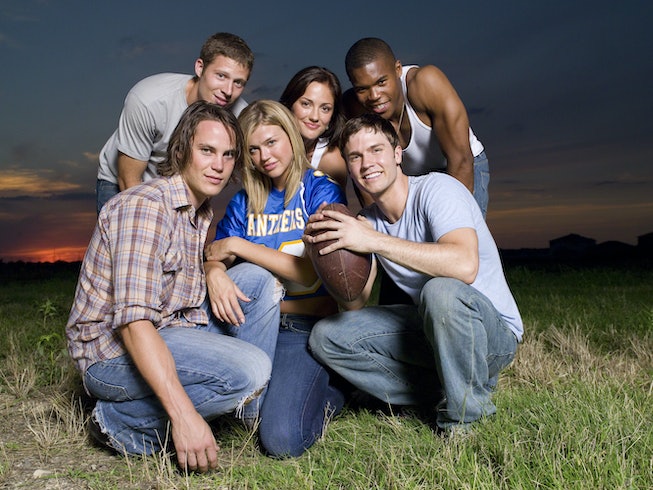 As we head into our last full month of summer, it’s only fair that Netflix give us a healthy helping of new TV shows and films to dive into while we still have time to relax in front of our TVs in the nice comfort of our central air-conditioning (or, if you’re me, precariously-installed window unit). Luckily, the streaming service isn’t letting us down this August, mixing together a wonderful array of original series and films with old classics that we’d all have a great time revisiting.

If you’re anything like me, you’ll be super excited to learn that all seven seasons of 30 Rock are returning to Netflix after first leaving the service almost four years ago, back in September 2017. Since then, the series has lived on almost every other streaming service — including Hulu, Amazon Prime Video, and most recently, Peacock — but starting on the first day of August, you can find the series on Netflix, allowing you to once again crack up at the near-daily antics of Tina Fey, Tracy Morgan, Jack McBrayer, and Jane Krakowski. (Alec Baldwin is just a casualty we’ll have to contend with.)

If you’re more interested in a new show, however, don’t fret. Netflix has you covered on that front too. I highly recommend The Chair, a new dramedy starring the history-making Emmy nominee Sandra Oh as the first woman chair of her prestigious university’s English department. The first project to materialize as part of Game of Thrones creators David Benioff and D.B. Weiss’ landmark Netflix overall deal, the series, which was created by Benioff’s wife Amanda Peet, unites Oh with Transparent’s Jay Duplass, who plays a down-on-his-luck professor who gets entangled in a campus-wide controversy. Funny and refreshingly insightful on current-day campus politics, the series is guaranteed to make a wave when it premieres on August 20th.

But maybe you just want something you don’t have to think about, something you can aimlessly turn on in the background while you answer emails or scroll through Instagram — in which case, may I suggest Cooking With Paris? Much like HBO Max’s surprisingly sincere (and deservedly renewed) Selena + Chef, Cooking With Paris follows multi-hyphenate celebrity Paris Hilton as she prepares meals under the guidance of special celebrity guest stars (whose names I’m forbidden from revealing right now). The series is expectedly lighthearted, finding Hilton doing typically Paris Hilton-y things like reaching for her stand mixer when a recipe calls for a blender or admitting that she never knew “tongs” were actually called tongs. (She just called it “the picking-uppy thing.”) If you’ve been starving (no pun intended) for a modern-day, food-indebted version of The Simple Life, you’re in luck.

On the film side, Netflix is treating subscribers to a slew of recognizable classics, including Ferris Bueller’s Day Off (one of my top-five favorite films of all time), Catch Me If You Can (perhaps Steven Spielberg’s most under-appreciated masterpiece), Inception (remember when Christopher Nolan’s puzzle-box films actually made sense?), Pineapple Express (Seth Rogen at his best), and The Edge of Seventeen (I’m a fan of anything starring Hailee Steinfeld).

And the new original films are just as exciting. If you’ve been sucked into the wormhole that is The Kissing Booth Cinematic Universe, you’ll find the news bittersweet that August 11th marks the official day that the trilogy draws to its close, with a final installment that finds stars Joey King and Jacob Elordi gradually checking things off their bucket list as they attempt to make the most of their last summer at the beach house.

But perhaps the biggest title to hit the service this month is He’s All That, the gender-swapped remake of the 1999 teen classic She’s All That. Following the same plot as the original but swapping the roles of makeover-er and makeover-ee, He’s All That stars TikTok star Addison Rae as a version of herself — a high school influencer, who accepts the challenge of turning a very unpopular student into a future prom king. The cast also includes Cobra Kai’s Tanner Buchanan as the uncool student who Rae’s character takes under her wing, and in a cool twist of nostalgia, She’s All That’s original star Rachael Leigh Cook as Rae’s mother.

Below, find a list of everything coming to Netflix in August 2021.