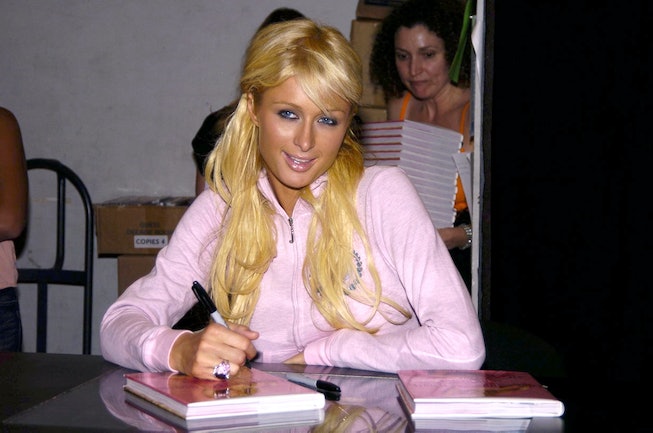 Paris Hilton is getting into the memoir game. The hotel heiress and It Girl turned NFT hot shot sold a book to William Morrow imprint Dey Street Books last summer, the same publisher behind Jessica Simpson’s bestseller from February 2020. The memoir, the aptly titled Paris: The Memoir is billed as “both searingly honest and deeply personal” and promises to give an even more in-depth look at Hilton’s paradigm-shifting celebrity persona. Plus, it certainly doesn’t hurt that early aughts nostalgia is currently a lucrative as hell venture.

Paris shared the jacket art of her long-awaited memoir on Twitter on Friday.

“I’m so excited to share the cover of my new book PARIS, coming this March! Available to preorder now wherever books are sold,” the business mogue wrote. “I finally feel ready to share some of my most personal stories yet. More details at http://HC.com/Paris and in the link in my bio! #ParisMemoir.” The jacket art is fittingly Paris, with baby pink sunset hues and a pgotos of the heiress gazing conspiratorially into the distance.

This isn’t Hilton’s first foray into publishing. Back in 2004, she released the fluffier read Confessions of an Heiress: A Tongue-in-Chic Peek Behind the Pose. The book focused on her thoughts on fashion, romance, and celebrity faux pas. If you want to read Hilton expound on tiaras or the necessity of not one, but two cellphones, you know what to do.

The new memoir aligns with the evolution of Hilton’s public persona, one that’s a little more down to earth and vulnerable. Back in September 2020, Hilton released her YouTube Originals documentary This Is Paris, which offered viewers a rare glimpse of the real Hilton and her heavy traumas from “emotional growth school” abuse, her sex tape leak, and more.

"If that happened today it would not be the same story at all," said Hilton of her sex tape scandal in her documentary. "They made me the bad person, like I did something bad."

According to the official summary, Paris: The Memoir is a “deeply personal” peek behind the curtain, exploring Hilton’s “meteoric rise from Upper West Side club kid to household name,” “her self-proclaimed ‘superpower’ of ADHD and a hidden history that traumatized and defined her.”

Paris: The Memoir will likely give even more context to moments that became part of pop culture canon. Hilton, of course, has many. She’s given us some backstory in recent years, like the truth behind her “Stop Being Poor” fashion moment, but there’s so much more to give. How did the the infamous “Bimbo Summit” New York Post cover make her feel? What was the genesis of “that’s hot,” the phrase heard around the world? Will there be an entire chapter devoted to “Stars Are Blind,” one of the best pop songs of all time? The people deserve to know.

This article was originally published on June 4, 2021