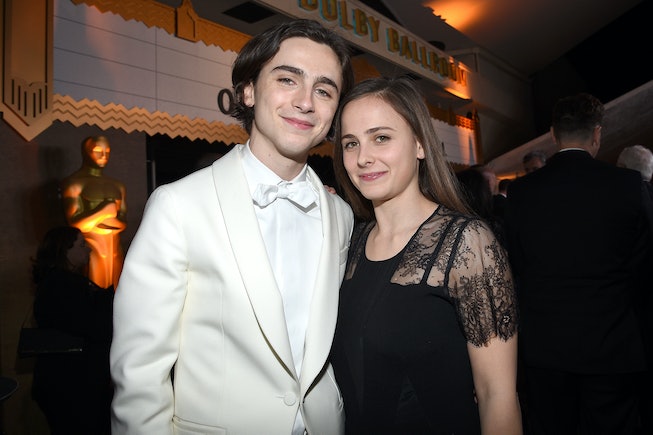 One of the of most exciting projects HBO Max announced prior to launch was The Sex Lives of College Girls (originally just titled "College Girls"), a half-hour comedy from the brilliant mind of The Mindy Project's Mindy Kaling about "four roommates randomly assigned to a dorm at Essex College, a prestigious New England university." Now, almost a full year after first greenlighting the 13-episode half-hour, single-camera comedy, HBO Max has announced its exciting cast, which includes Amrit Kaur, Reneé Rapp, and Alyah Chanelle Scott, with none other than Pauline Chalamet leading the ensemble. Together, these four "sexually active college girls" are a "bundle of contradictions and hormones" while being "equal parts lovable and infuriating."

If you couldn't automatically tell, Pauline Chalamet is the (older) sister of Oscar nominee Timothée Chalamet. Before this, she appeared in a number of short films — and most recently, alongside SNL's Pete Pete Davidson in Judd Apatow's The King of Staten Island. Chalamet will star as Kimberly, "the valedictorian of a working-class public high school in a humble Arizona suburb." According to her character description, Kimberly is "smart, caring, earnest, and ambitious," but apparently, not the most popular girl in class. "She’s prepared for college academically — but not so much socially."

After appearing in a number of independent TV series, Amrit Kaur will join College Girls as Bela, "a comedy-obsessed, super confident cornball from the affluent suburbs of northern New Jersey who is never afraid to say what she’s thinking." According to her character description, Bela lost her virginity for the first time only two weeks prior to college, but still "describes herself as 'extremely sex-positive.'”

Meanwhile, College Girls marks Reneé Rapp's television debut after winning a Jimmy Award in 2018 and later becoming a Broadway darling thanks to her critically-acclaimed performance as the delectable villain Regina George in the Broadway musical production of Mean Girls. Here, she will play Leighton, who, quite frankly, doesn't sound too far off from Regina George. Though Leighton "would describe herself as a normal, classy girl from a great family," others think of her as "blunt, judgmental, and beyond entitled." A fourth-generation legacy admit at Essex, Leighton is a member of "one of the richest (and quietly Republican) families on New York City’s Upper East Side."

And finally, there is Alyah Chanelle Scott, who is also making her television debut after wowing audiences on Broadway — in her case, in The Book of Mormon. In The Sex Lives of College Girls, she will play Whitney, who is "strong and self-assured with a dry sense of humor." Described as a "soon-to-be star of the Essex soccer team," Whitney "is also the only daughter of the most powerful Black senator in the country" and "the graduate of an elite Los Angeles prep school." She chose an East Coast college "to live her most exciting life."

The Sex Lives of College Girls was created by Mindy Kaling with Justin Noble serving as showrunner. The pair most recently worked alongside each other on Netflix's excellent teen comedy Never Have I Ever — and if College Girls has even half the charm (since it's bound to have at least double the raunchy jokes and steamy sex scenes), HBO Max subscribers are in for a treat. When it premieres, it will join HBO Max's rapidly expanding library of half-hour comedies, including recent acquisitions The Other Two and South Side.