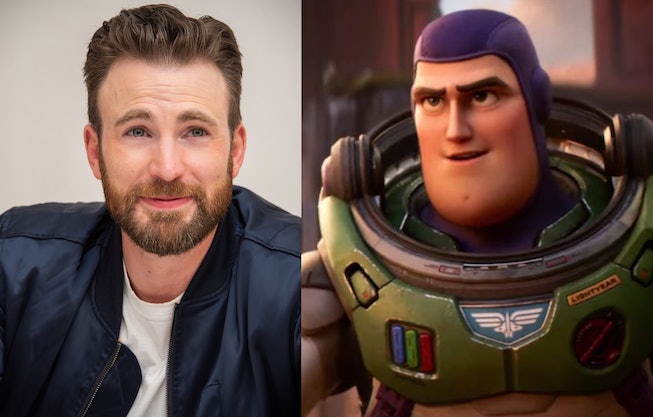 Just two years after hanging up his shield as the Marvel Cinematic Universe’s beloved Captain America (always remember, that’s America’s ass), Chris Evans has already begun padding his resume with other fare. Since then, the jacked All-American heartthrob has been bitten by the prestige TV bug as Andy Barber in Apple TV’s Defending Jacob, captivated audiences as the not-quite-real-life character Ari Levinson in The Red Sea Diving Resort, and sported enviably luxurious sweaters as the deceptively charming Ransom Drysdale in Rian Johnson’s Knives Out.

Sure, the Boston native may already be considering a return to the money-making empire that turned him into an A-List star, but with projects like Greg Berlanti’s Little Shop of Horrors on the horizon (he’s been tapped to go full demented dentist as the notorious Dr. Orin), it’s clear that Evans wants to diversify his portfolio. Up next on the agenda? Voicing Buzz Lightyear in Pixar’s upcoming Lightyear. And as of today, we finally have a teaser trailer to prove it.

Directed by Finding Dory co-director Angus MacLane, Lightyear is described as a “sci-fi action-adventure” story that “presents the definitive origin story of Buzz Lightyear.” But this isn’t the Buzz Lightyear we all know and love from the Toy Story tetralogy. After all, that Buzz was — as the film’s fairly straightforward title suggests — just a toy. But Buzz Lightyear was also a real person, “the hero who inspired the toy,” in Pixar’s words. In that way, Lightyear will serve as the official introduction to “the legendary Space Ranger who would win generations of fans.”

At the time, Evans celebrated the announcement by quote-tweeting Pixar and saying, “I don’t even have the words.” Later, he offered his own clarification about the film, tweeting, “And just to be clear, this isn’t Buzz Lightyear the toy. This is the origin story of the human Buzz Lightyear that the toy is based on.”

And with the official David Bowie-soundtracked trailer now in the world, it’s clear that Evans’ excitement hasn’t waned one bit. Following today’s release, the actor tweeted, “I’m covered in goosebumps. And will be every time I watch this trailer. Or hear a Bowie song. Or have any thought whatsoever between now and July cause nothing has ever made me feel more joy and gratitude than knowing I’m a part of this and it’s basically always on my mind.”

In a separate tweet, he also noted that “animated movie[s] were an enormous part of [his] childhood,” describing them as an “escape,” his “adventures,” his “dreams,” and his “first window into the magic of storytelling and performing.” He made sure to thank Pixar and MacLane for choosing him and included a statement about the film being “a dream come true.”

Check out the teaser trailer below. Lightyear hits theaters June 17, 2022.