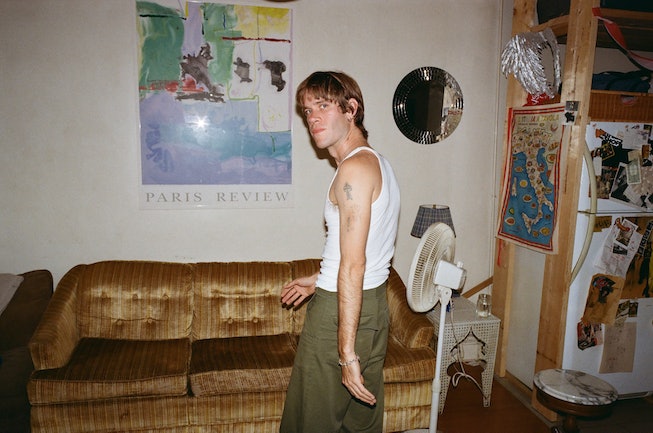 Porches is the recording project of New York City musician Aaron Maine, who for the greater part of the last decade has been making enigmatic synth-pop that, despite lyrics that were sometimes vague, still somehow wormed its way into your brain’s emotional cortex. His latest album, All Day Gentle Hold !, is the most refined iteration of his craft thus far: a burst of pure, energetic feeling. His only mission was to make the most captivating, celebratory songs he could, and over its 11 less-than-three-minute tracks, he succeeded.

Porches now follows it up with his latest study in mood: a slow and shadowy cover of Harry Styles’s Fine Line hit, “Adore You.” Gone is its glitzy and glittery disco suit, and in its place Maine’s plaintive, guitar plucked melody. He sings its lyrics with a hollow reverb echoing behind him, and as the song unfolds its meaning shifts into something more eerie. Are these the infatuated words from a global superstar to his ex-lover, or, in this new form, from a voyeur to an unwitting subject?

“I thought it would be interesting to strip down ‘Adore You’, this huge pop song, and see what happened,” Maine wrote of the cover in a press statement. “I feel like I was really able to get lost in it and create this kind of eerier and darker version.”

It’s a song that we’d definitely like to hear in the next season Netflix’s You. Hear the cover below and read on to learn more about Maine, All Day Gentle Hold ! , and his picks for the year’s best song and album.

I am on the 11th floor of a hotel in Los Angeles. Sticking my arm out of the three-inch-crack the window opens, smoking a cigarette trying not to set off the smoke alarm.

Why'd you decide to cover Harry Styles's "Adore You?" Are you a Harry fan?

I spent a lot of time with “Adore You.” I sang it hundreds of times before sitting down to record it. I really wanted to "get to know" the song, and figure out how to inject my own emotion into this major pop song. I'm newly a Harry fan, especially after spending time with his catalog.

What are you most proud of pulling off on your latest album All Day Gentle Hold !

I think it's really an "album album,” like you're in the world from the first second to the last. At least I hope you are.

Everything about the album was created to be easy and fun to digest/listen to, and for you to perform. Have you performed its songs live yet, and which songs are you most excited to play?

I made these songs fantasizing about what would be the most freaked out, alive, celebratory, energetic in a live performance situation. We played two shows in Chicago over the summer; they felt absolutely incredible, but it was sort of a tease to just get to do those two. I'm literally counting down the days to play these songs on tour.

Besides your project, what is your 2021 top album and song?

I'd have to say the top song is “Send Me” by Tirzah. I think the album I listened to most in 2021 is Tender Buttons by Broadcast.

Porches’ All Day Gentle Hold ! is out now.