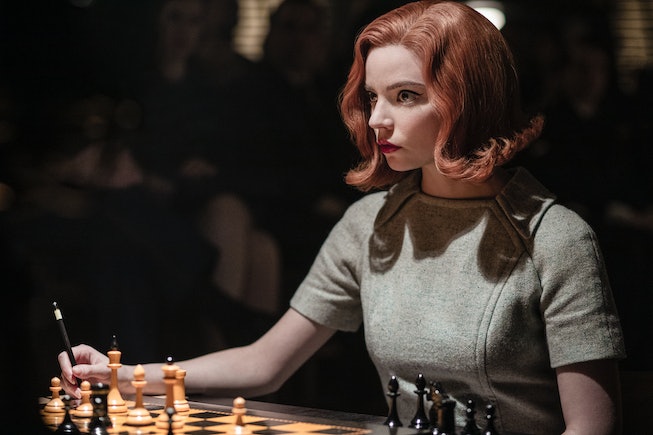 After breaking the Netflix record to become the streaming service's biggest scripted limited series in history, turning star Anya Taylor-Joy into a capital A-list celebrity, and going on to rack up multiple awards at last week's Golden Globes and at this weekend's Critics Choice Awards, the question on all of our minds is: What can't The Queen's Gambit do? Well, the answer is quickly adding up be nothing, as the breakout Netflix miniseries adds yet another notch to its belt with the announcement that it will soon be getting the musical treatment.

The Queen's Gambit tells the fascinating story of one Beth Harmon, an orphaned child who is introduced to the game of chess at age 8, while staying at an orphanage. Eventually, Beth is adopted by a less-than-ideal family with stereotypical ideas about what it means to be a girl, but Beth's passion for chess never wanes — and before long, she's ascending the ranks on the national circuit. The breakout series concludes with a tension-laden trip to Russia, where Beth is matched head-to-head against the perceived best chess player in the world. (You can guess how that game plays out.) Over the course of seven episodes, The Queen's Gambit also touches upon drug addiction, alcohol dependency, mental health issues and sexism in the highly competitive realm of chess.

Rights to the novel by Walter Tevis (on which the miniseries was based) were recently acquired by Level Forward, a "story-driven, impact-minded entertainment company." Level Forward is now actively developing the story for the stage in a musical format. “It is a privilege for Level Forward to lead the charge of bringing The Queen's Gambit to the stage through the beloved and enduring craft of musical theater," said Level Forward CEO Adrienne Becker and Producer Julia Dunetz. "Told through a brave and fresh point of view, audiences are already sharing in the friendship and fortitude of the story’s inspiring women who energize and sustain Beth Harmon's journey and ultimate triumph. The story is a siren call amidst our contemporary struggles for gender and racial equity, and we're looking forward to moving the project forward.”

Exactly how this story will be translated to a musical setting is anyone's guess. After all, turning the rather rote game of chess into something interesting on screen was already a feat — and partially what made the Netflix hit so impressive. Moving that element to the stage may prove even more complicated. Though, personally, I'd be lying if I said I wasn't excited to soon be treated to musical renditions about the Wonderful World of Chess. If I had to take some stabs at potential song titles, I'd say, "This Little Green Pill of Mine," "Beat the Russians," and "Falling In Love With a Gay Man."

We'll just have to stay tuned!