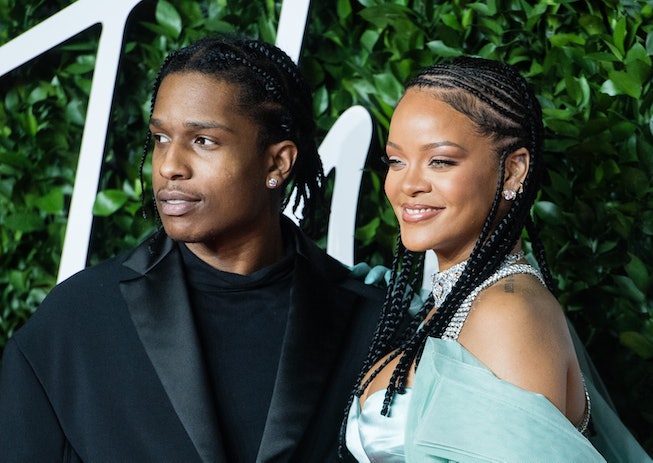 Back in August, Rihanna and A$AP Rocky chatted beauty and Fenty Skin with GQ and Vogue, and it didn't take a rocket scientist to discern that there was some heavy sparks flying across Zoom channels. The two flirted and trolled each other within an inch of their lives, and left viewers wondering what in fresh hell was exactly going on between the two friends. Was it flirting for the sake of moving Fenty Skin products, or was love really in the air? Or should I say, on the brain?

It turns out that the two longtime friends are allegedly dating, just in time for the annual cuffing season. Per Page Six, the two were spotted dining "discreetly behind a curtain," at the Beatrice Inn in New York City, which I personally feel is not something you do with platonic friends.

Rihanna has already brushed off rumors of dating A$AP once this year, but she won't fool me again! The two were spotted out and about back in January after Rihanna and her billionaire boyfriend Hassan Jameel broke things off after three years of dating. At the time, a source close to Rih said that she "wants to be single and isn’t going to jump into something," and that the two were merely hanging out. 10 months of quarantines and lockdowns later, she's singing a different tune!

NEXT UP
Entertainment
Adam Levine Denies Affair With Instagram Model Sumner Stroh
Entertainment
Who Will Rihanna Bring To The Super Bowl?
Life
Julia Fox Calls Ye “The Most Lit Rebound Ever”
Entertainment
Beyoncé's 'Renaissance' Tour Is Reportedly Scheduled For Summer 2023