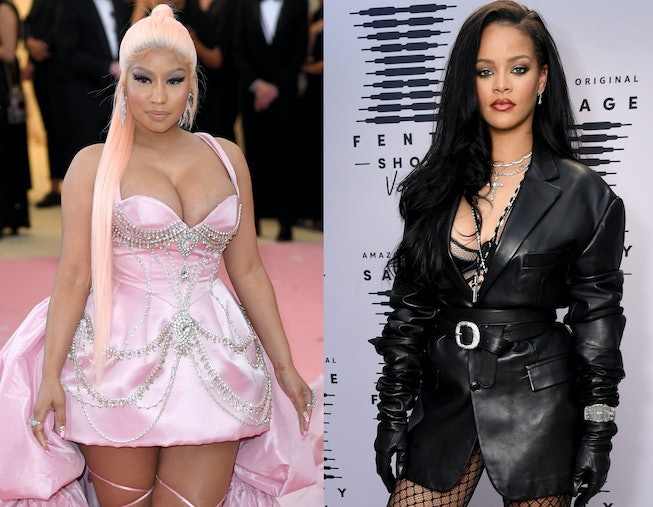 For the layperson, an Instagram follow may not mean much. But for celebrities — particularly those of the musical variety — an Instagram follow can sometimes mean so much more. When two artists follow each other out of seemingly nowhere, it often means they are gearing up for a future collaboration. So naturally, the internet has been set ablaze ever since word got out that Nicki Minaj and Rihanna recently followed each other on Instagram.

Could it be a new hit single on the horizon?

For Rihanna fans, this would be big news, as the once chart-topping artist has seemingly abandoned music for greener pastures in the lingerie, fashion, and beauty space. The Barbadan queen hasn’t released a new solo single since shaking the world with her career-best album Anti in 2016 and hasn’t offered a feature since 2017, when she appeared on Future’s “Selfish,” DJ Khaled’s “Wild Thoughts,” and Kendrick Lamar’s “Loyalty” in quick succession.

On the other hand, Nicki Minaj has kept her fans sated in recent years: Though the rapper’s last album, Queen, came out in 2018, she has dropped a slew of one-off singles including the instantly iconic hits “Megatron” in 2019 and “Yikes” in 2020. She has also offered guest verses to some of the past years’ most memorable tracks, including Karol G’s “Tusa,” Ty Dolla $ign’s “Expensive,” Megan Thee Stallion’s “Hot Girl Summer,” and, of course, the chart-topping “Say So” remix with Doja Cat.

Nevertheless, can anything compare to a collab with Rihanna?

I’ll save you the time of thinking — the answer is no.

Of course, Rihanna and Nicki Minaj are no stranger to collaborations. All the way back in 2010, Nicki Minaj appeared on Miss Robyn Fenty’s Loud single “Raining Men.” And just a few weeks later, Rihanna returned the favor by hopping onto Minaj’s Pink Friday track “Fly.”

Maybe 2021 is the year they finally try to recapture that 2010s magic?

But let’s not get ahead of ourselves. There’s always the possibility that, in the case of Rihanna vs. Nicki Minaj, a follow is just that: a follow. Maybe these old friends finally chose to make it Instagram official? Maybe they’re getting together for something else, entirely non-music-related? Who can ever know? But for the sake of my inner-Barb-x-Navy heart, I’m holding out hope.

Give me the music!