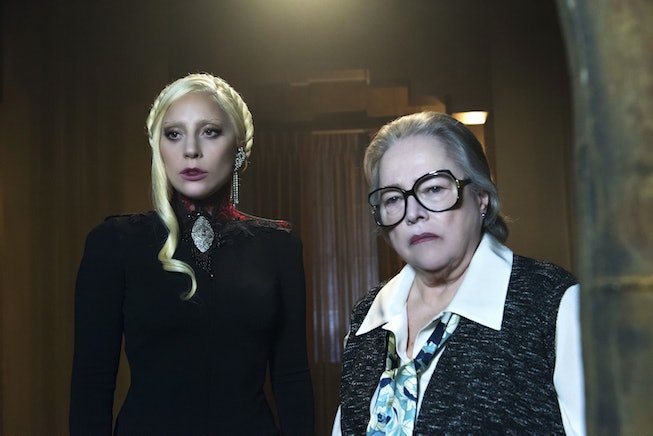 Right now, Ryan Murphy is riding high on the success of his latest Netflix series Hollywood, which is currently sitting comfortably at #3 on the streamer's list of "Top 10 TV Shows in the U.S. Today." But that hasn't stopped the prolific showrunner from looking forward towards the future. While the fate of the upcoming tenth season of his Golden Globe-winning FX series American Horror Story is still up in the air thanks to COVID-19, Murphy is using the extra time to set the stage for a spinoff series that he's somewhat predictably named American Horror Stories.

Murphy made the announcement with an Instagram post (his preferred method of communication) that showed a screenshot of a recent Zoom call he shared with many members of the original series' ever-expanding cast — including Jessica Lange, Angela Bassett, Evan Peters, Kathy Bates, Sarah Paulson, Denis O'Hare, Emma Roberts, Angelica Ross, Lily Rabe, Taissa Farmiga, Adina Porter, Billie Lourd, Wes Bentley, Leslie Grossman, Finn Wittrock, and Cody Fern. In the accompanying caption, Murphy detailed the "cast zoom call" where everyone reunited to catch up and "reminisce about the good times." Amongst other things, they discussed "when we will start filming the next season of the mothership" and "other stuff I cannot print." Judging by the smiles on everyone's faces in the post, the chat was an enjoyable one, a feeling Murphy confirmed by noting, "It was so much fun and I'm glad we caught up. I miss everyone!"

But the post's biggest reveal was buried in between some of the more mundane updates, with the six-time Emmy winner casually mentioning a "spin off we're doing called 'American Horror Stories' (one hour contained episodes)." While no other information was given about what we can expect, Deadline confirms that the new project will function as "a companion anthology series to AHS where each episode is a standalone ghost story." Furthermore, we can safely assume that at least some of these American Horror Story veterans will make appearances.

And isn't that exciting? Anything to get Angela Bassett back on my TV screen!

Check out Murphy's special announcement below.