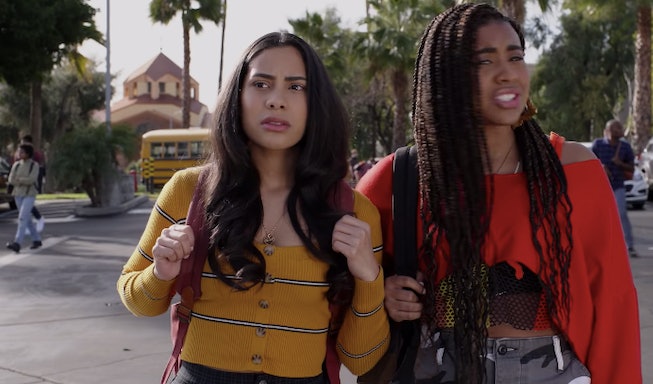 It's not a stretch to say we're in the middle of Reboot Mania right now. From the proven good (no, I'm not over Netflix's perfect The Baby-Sitters Club) to the hopefully good (my fingers are crossed for HBO Max's reimagined Gossip Girl) to the undeniably bad (good riddance, Roseanne), we are living through an age where television executives would rather capitalize on existing IP than take a chance on something new. This isn't necessarily a bad thing, but as was demonstrated with The CW's impossible-to-hate mid-aughts reboot of Beverly Hills, 90210 (shortened to just 90210), the best reboots are those that capture the original magic by inviting key members of the original cast back. Which is why I'm rather excited for Peacock's upcoming reboot of Saved By The Bell. Though it will focus on a new group of students at the elite beachfront high school of Bayside, original Bayside Tigers Zack Morris, Kelly Kapowski, A.C. Slater, and Jessie Spano are all returning, as well. And with the release of its first trailer, we can thankfully confirm that the beloved quartet will be central parts of the new action.

The new trailer does an effective job of balancing nostalgic callbacks with hints of what we can expect from this new crop of high school students. In between instantly recognizable moments, like Mario Lopez's Slater character playfully calling Elizabeth Berkley Lauren's Jessie "Mama," there are also plenty of adorable new moments, like when a boy asks a girl out on a date in front of all his eavesdropping friends. Aside from Principal Ronald Toddman telling a new student that he "only cares about Zack and Kelly," my personal favorite moment comes when Slater approaches a student in the cafeteria and does his famous chair-turnaround trick. "Did you just sit backwards in a chair?" the student earnestly asks. "Wow. I've never seen anyone do that in real life." It's a self-aware joke that any fan of the original series will find at least mildly amusing.

Saved By The Bell has always used its high school setting to discuss important issues, whether it be drug abuse, homelessness, divorce, or death, and from the looks of it, its 2020 counterpart will be no different. According to Variety, the new version of the beloved teen sitcom picks up 30 years after the conclusion of the original and will focus largely on wealth and class disparity. Now a governor, Zack Morris (Mark-Paul Gosselaar) decides to shut down several underfunded high schools, "leaving its students to be absorbed by those in more affluent areas, namely Bayside High School." While relatively well-off kids like Zack's son Mac (Harriet's Mitchell Hoog), Jessie’s son Jamie (The Husband's Belmont Cameli) and the "rich and popular" Lexi (Jessie's Josie Totah) are used to Bayside's elite circle, new kids like Devante (Maze Runner's Dexter Darden), Aisha (Chase's Alycia Pascual-Peña), and Daisy (The Forty-Year-Old Version's Haskiri Velazquez) feel much more alienated in this environment — something Slater, now working at Bayside as a gym teacher, is determined to help them with.

Judging from the trailer, Saved By the Bell will approach these discussions head-on. In a key moment, Daisy and Aisha arrive to Bayside and immediately start talking about the perceived wealth of their classmates. Meanwhile, those other classmates have casual conversations about hiring "DJ Khaled's baby" to create a playlist for an upcoming party. Any sitcom willing to have real discussions about the role privilege plays in each student's individual high school experience is A-okay in my book. Let's just hope the jokes can keep measuring up.

Check out the first official trailer for Saved By the Bell below.

The new version of Saved By the Bell premieres November 25th on Peacock.