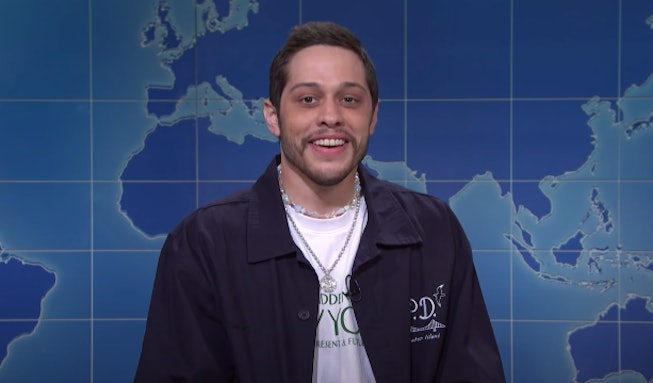 McKinnon — who has worked on SNL for 11 seasons — used the show’s cold open to reprise her infamous role as Ms. Rafferty, a woman who survived an alien abduction. The episode’s host, Natasha Lyonne, acted alongside McKinnon during the farewell sketch. The duo was also joined on stage by Bryant, Mikey Day, and Cecily Strong.

Meanwhile, Davidson used his time on the Weekend Update to say goodbye to the audience. Throughout his 8 season run, the comedian became a household name due to his clever and self-deprecating sets that often poked fun at the media’s perception of him. In this week's episode, he referenced a Fox News segment from 2018 where the media outlet called him a “monster.”

Before the segment was over, Davidson cracked one final joke about his time working for Saturday Night Live. “I never imagined that this would be my life,” he said while pointing to a photo of his younger self during his first season on SNL. “Back then I was just a skinny kid and no one knew what race I was,” he continued. “Now everyone knows I'm white because I became hugely successful while barely showing up to work.”

Bryant announced her departure during the Weekend Update as well. The comedian played a trend forecaster with Bowen Yang to explain what’s “in” this summer. Towards the end of the sketch, Bryant announced that “ten nice years,” in reference to her 10 seasons on the show were “in.” Then Yang grabbed her hand and said, “In, a friend I couldn’t have done this without.”

Mooney later appeared in the last sketch of the night with McKinnon and Bryant, where they performed a song about grey adult pigtails. The comedian spent nine seasons on SNL and has since branched off into a solo career like the rest of his departing castmates.

As they say, all good things must come to an end. However, the departure of these four stars means a new set of comedians can take their place. Stay tuned to see who SNL adds to their cast next season.

NEXT UP
It Girl
Madison Bailey Is Embracing The "Elegance" of Being in Her Mid-20s
A Night Out
A Night Out With Rachel Bilson
Culture
Phoebe Dynevor Will Not Return for Bridgerton Season 3
Culture
6 Shows To Binge Once You've Finished 'The White Lotus'
Style + Culture, delivered straight to your inbox.