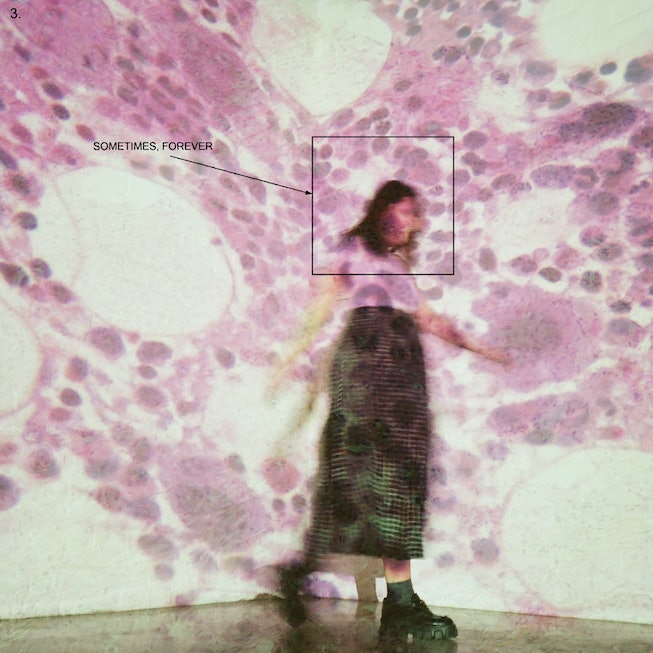 Somewhere in a scroll of YouTube comments, a single from Soccer Mommy’s third record, Sometimes, Forever, is described by a listener as “like the 90s, but brand new.” The observation is spot on. Soccer Mommy’s Sophie Allison has built a career on her capacity to mesh turn of the millennium grunge-pop and the tender, confessional songwriting of the late 2010s with uncanny sincerity and precision.

Allison’s 2018 studio debut as Soccer Mommy, Clean, narrowed in on the unwieldy insecurities of early adulthood with cutting rock hits like “Your Dog” and “Cool.” The record emerged as Allison did a two-year stint at NYU, played shows at Brooklyn’s now shuttered DIY stronghold Silent Barn, and toured as support for a still-fledgling Phoebe Bridgers. On Clean, Allison’s acute awareness of her inner world collided with earnest admissions of young love, ambition, and inferiority — a perspective that matured on her 2020’s Grammy-nominated color theory, where the band’s sound morphed into something dreamier, cleaner, and at times, slightly less visceral. On Sometimes, Forever, Soccer Mommy makes her bid at a darker, goth aesthetic with a bit of sci-fi cheek, twisting Clean’s grit and the artistic vision of color theory into a highly listenable reflection on steadying one’s self in a world that increasingly feels haunted and antagonistic.

Before the pandemic, Allison toured with Liz Phair and Kacey Musgraves and stepped in as musical support at a Bernie Sanders rally, growing into a bonafide rock star and turning a once ironic band name into one with real draw. That boost in visibility has meant that Allison, who lives in Nashville, has had to assess where exactly she wants her fame to take her. “I hate so many parts of the music industry, but I also want success,” she admitted in a press release for Sometimes, Forever. “And not just success – perfection. I want to make things that are flawless, that perfectly encapsulate what I'm thinking and feeling. It’s an unachievable goal that keeps you constantly chasing it.” It’s a tension that underbellied color theory, which explored themes of mental health, and is even more present on Sometimes, Forever.

The record opens with Allison still in love, jaded when it comes to the industry side of her art, and navigating what feels like a series of lows. Still a solitary writer excavating her experiences with darkness, Allison finds resilience in accepting truths about herself, rocketing painful statements into cathartic truths over an array of spooky synth motifs and guitar. “I didn't want to make something super depressing without any sense of magic,” Allison said of the record. Indeed, Sometimes, Forever is able to hold the bittersweet paradox of its title in balance, swirling sunny shoegaze and soft-edged love songs, like the catchy “Shotgun,” with heavier influences of ‘80s goth rock and macabre imagery.

On this record, Allison found a kindred creative spirit in experimental producer Daniel Lopatin of Oneohtrix Point Never, whose more avant-garde sonic palette compliments a record full of Allison’s most ambitious and interesting arrangements. Album opener “Bones” is both breezy and resigned with a sparkling early-aughts affect that builds toward an ecstatic jumble of guitars, reminiscent of the lighter moments from the band's first two records. Now navigating a fair amount of fame, Allison steers clear of social media and tends to the physical and mental wear of her job and accompanying disillusionment. There’s a whole slice of the record that feels dedicated to this tension. “Feel It All The Time” charts Allison’s relationship with her pervasive malaise, driving down service roads in a truck as old as she is. “Darkness Forever” unfurls as she empathizes with Sylvia Plath and her need for relief: “She tried to set the evil on fire,” she sings over an eerie and jagged percussive beat. On single “Unholy Affliction,” Allison attempts to reconcile the chasm between art and industry as she remarks, “It’s all in my bones and in my blood/ So carve me up and let the colors run,” a statement that cites the creative thesis of 2020’s color theory. The song is a full circle moment reminding listeners that Allison is holding two realities in balance: her art is both a meaning-making and a truth obscuring thing. It’s her dueling fears of being entirely consumed by something or becoming completely apathetic that drive her to sanctify her own truths.

Still a solitary writer excavating her experiences with darkness, Allison finds resilience in accepting truths about herself.

Throughout Sometimes, Forever, it feels as though Allison is finding catharsis through different inflection points of genre and tone. “Don’t Ask Me,” a driving guitar-forward track, grinds through a moment of detachment without ever feeling buoyant, but “Following Eyes” shifts tone like a brief summer storm; a grumbling, anticipatory verse burns off into a shimmering chorus as Allison comes face to face with the specter that’s been haunting her.

What makes Sometimes, Forever so poignant is the new perspective Allison seems to be writing from. After two albums, she’s come to understand the cyclical nature of her emotions and has sharpened her songwriting abilities enough to polish the muck into reverent reflections on the inevitability of tumult. Album closer and standout “Still” allows this idea to crystallize, as her tender lyricism and quiet delivery amplify the sentiment at the core of her songwriting. “I don’t know how to feel things small/ It’s a tidal wave or nothing at all.”

Soccer Mommy’s Sometimes, Forever is out 6/24.