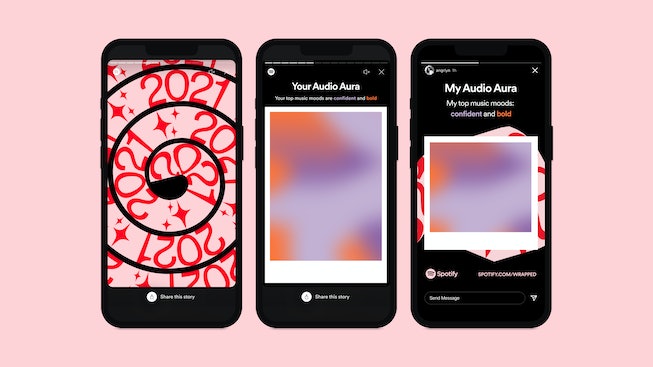 Another year, another Spotify Wrapped. If you’ve already had the pleasure — or foreboding apprehension — of checking your results in the streaming platform’s annual year-end wrap-up, you might’ve noticed one new shiny data feature to share (or center your personality around): a reading of your audio aura.

For those unfamiliar, the aura reading is the latest way Spotify is helping you make sense of your year’s listening habits, this time by analyzing the moods and vibes of the songs you’ve been reaching for and distilling its findings into an aesthetically pleasing, colorful, and meditative aura portrait. The idea is the audio analogy of what you’d get from taking an aura photograph — if the camera took a snapshot of your liked songs and beloved playlists instead.

Spotify developer Ziad Sultan teamed up with the celebrity aura reader and medium Mystic Michaela to create the new feature, which takes advantage of the streaming platform’s meticulously categorized “mood” tags accompanying each song in the app’s backend. Using these tags, Mystic Michaela attached a corresponding color — red, orange, yellow, green, blue, or purple — to each overall “mood,” which the algorithm then used to create your own semi-custom audio aura reading.

At its most trivial, the aura reading is a pretty picture to look at that you can somehow connect back to your identity. At its most deep, however, it can be a revealing (albeit brief) glimpse to understanding why you like the music you like, if you were even aware that the music you liked had a type.

“It's actually creating a moment and opportunity for you to look at your playlist in a way where you're asking yourself really deep questions,” says Mystic Michaela. “And really opening yourself up to what it is exactly that you're grasping for in life, which I think was cool.”

Below, NYLON caught up with the professional aura reader to chat more about the new Spotify feature, what your results say about you, and the aura that she’d give to this past year, 2021.

Can you describe a little bit of what you do as an aura reader?

Basically, everyone has colors around them, it's your energy signature. It's a filter in your life. It decides a lot of things: what motivates you, the relationships you have, how you communicate, what jobs you like doing. It's just how you approach the world and mine is different than yours. A lot of times I'll see people wanting to be different than they are, and then things don't go great for them. So a lot of the work I do is, who are you and how best to incorporate yourself into everything that you do.

What exactly happens when you do an aura reading?

So when I look at somebody, I immediately see their colors around them and I dive into that. Once I get in there, I get messages about patterns and things that maybe could be different, or blockages, insecurities, little things that you could tweak to embrace yourself better, so as to reach your highest good or your highest potential.

What kind of relationship would you say auras and music have?

For example, if somebody is very purple and blue, maybe they're a little bit more reflective or introverted or quiet and they have something really stressful they have to do. They're sticking to music that might have an orange Audio Aura. That's motivated, bold, rebellious. Borrow that vibe, amp me up, and get me ready for it. I think that people are going to find that as part of their Audio Aura when they explore this feature.

How was the process of translating aura reading on to a global scale on a platform like Spotify?

So what I learned was every song… this is crazy, by the way. Every single song on Spotify has a mood descriptor. Then they gave all the mood descriptors to me and were like, categorize them in each aura. Every aura has a vibe too, so they just match up. So you'll get two colors and the first one will be who you are, and the second one is what you reach for.

Working with the team and being able to basically watch them create an algorithm and make it so elevated to the point where it's not just, “These are my colors. Yay, something simple.” It's actually creating a moment and opportunity for you to look at your playlist in a way where you're asking yourself really deep questions, and really opening yourself up to what it is exactly that you're grasping for in life, which I think was cool.

I'm sure once Spotify Wrapped rolls out, there will be people who feel conflicted or feel like they don't resonate with their audio aura. What would you say to those people?

There's your aura and then there's your Audio Aura. There's a difference between the two of them. Like I said, who I am isn't exactly the music that sometimes I listen to, in order to get me to what I have to do. Motivate me to work out or whatever. That's the first thing I would say to somebody. The second thing: it's not exactly not you. It's a conversation that you might want to have with yourself about you.

Even if your audio aura doesn't resonate with who you actually are, it's going to resonate with a part of you that's like, what am I reaching for? What are my goals? What energy do I try to align with daily? I think that's something I would say to people. Just take the cues for what they are and be like, hmm, suggestions for what I might need to have conversations with myself about.

Finally, could you do an aura reading of this past year, 2021?

[Laughs] At the end of 2020, they were like, what are our colors, 2020? I called 2020 hot mess purple. What you gotta do is you got to cut through a lot of stuff so we can have the conversations that we weren't having. Well, 2021 was the year to have the conversation. I would give this year yellow-purple. It has to be a compound. Yellows are analytical. They're looking for self improvement. Let's organize it. Sometimes they can be a little bit... Yellow people can take a project and be a little intense about it. I think this year was a little intense with some of the conversations that we were having. I feel like I would give 2021 the yellow-purple.