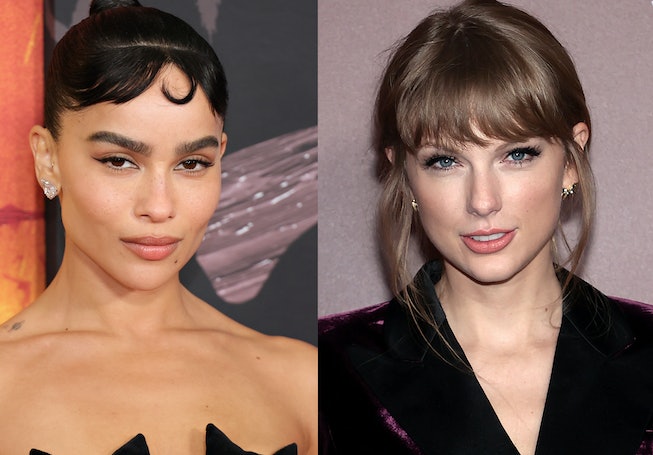 It appears Taylor Swift was among the many DC Comic fans who traveled to theaters to see The Batman this weekend. The blockbuster, directed by Matt Reeves, and starring Zoë Kravitz (Selina Kyle / Catwoman) and Robert Pattinson (Bruce Wayne / Batman), premiered on Sunday, March 6th. In the 24 hours since its debut The Batman dominated the box-office, grossing roughly 128 million, and, perhaps more importantly, got Swift's stamp of approval in the process.

After seeing the movie, the “All Too Well” singer fan-girled over Kravitz's performance. According to People, Swift posted a story on her Instagram account praising the actress’ portrayal as Catwoman. “@zoeisabellakravitz is the Catwoman of my dreams,” she wrote alongside an image of Kravitz in costume, “The Batman was phenomenal.”

Kravitz is the latest Hollywood star to take on the role, stepping into the shoes of many elite-actresses that came before her. Michelle Pfeiffer, Eartha Kitt, Anne Hathaway, and Halle Berry all starred as Catwoman at one point in their careers. Their depictions of the feisty-character all differed, but Kravitz re-imagined the role for the 2022 production, giving Catwoman a fresh, and queer, twist.

Just last week the actress announced that she interpreted Catwoman as bisexual, and played the role with that in mind. Though Catwoman, historically, has been written as queer in the DC Comicbooks, this was the first time an actress has attempted to portray that on screen.

Swift did not comment on the details of Kravitz performance, but according to her review, it’s certainly one worth seeing. The Batman is currently available to watch in theaters everywhere and will reportedly be available to stream on HBO Max next month.

NEXT UP
Culture
The Madonna Biopic Is Being Scrapped
Culture
Kaia Gerber Won’t Stop Until She’s Cast As Patti Smith In A Biopic
Culture
The 2023 Oscar Nominations Full List Is Here
Entertainment
Taylor Swift Sparkled In Midnight Blue On The 2023 Grammys Red Carpet
Style + Culture, delivered straight to your inbox.