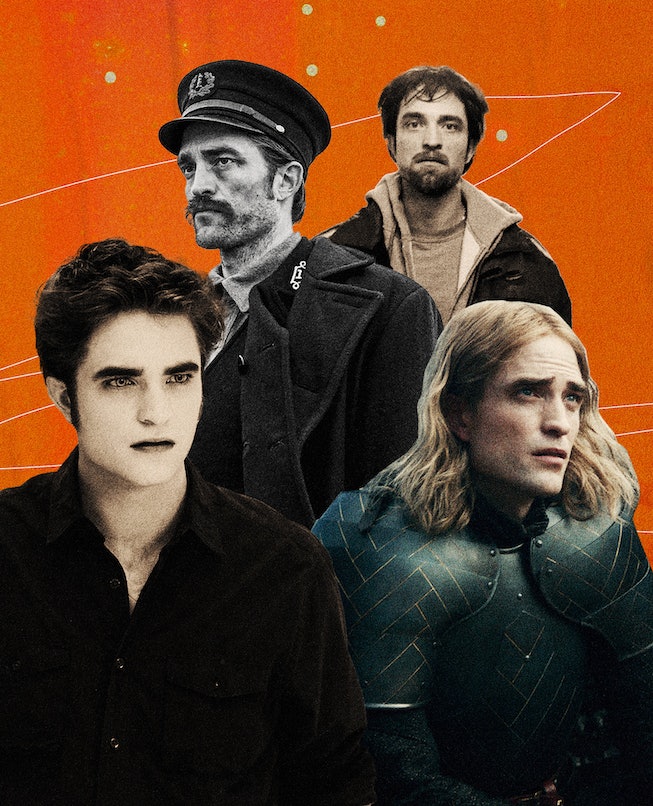 Whether you are Team Edward or Team Jacob, it is undeniable that Robert Pattison has gone from a glittering heartthrob with vampiric sensibilities to one of the most thrilling leading men of a generation. But how did he get here? The last decade has seen the actor retreat from his Hollywood start and quietly emerge on the independent filmmaking scene where he has never been one to turn down an unconventional character. Playing grifters, drifters, and outsiders, R-Patz has dedicated himself to rebelling against character typecasting and working with cinematic auteurs to create an eclectic filmography of assorted performances.

From a famously unhinged quarantine pasta recipe to his nefarious pastime of lying for fun, Pattinson is stepping back into cultural commentary with the upcoming The Batman as well as a sci-fi thriller project with Parasite director Bong Joon Ho on the horizon. With The Batman hitting theaters on March 4th, there’s no better time to revisit some of Robert Pattinson’s best work and see where The Batman falls amongst his greatest performances to date.

Perhaps Pattinson may never be able to totally shake the vampiric association that ultimately put him in the spotlight as a Hollywood heartthrob, but that’s not necessarily a bad thing. The adaptation of Stephenie Meyer’s Twilight series thrust the young actor into a superhero status with the franchise’s unprecedented success making Pattinson forever tied to the cultural phenomenon.

Across five films Pattinson plays Edward Cullen, the ice-cold, marble skinned vampire, with brooding intensity. Having already appeared in Harry Potter and the Goblet of Fire as Cedric Diggory, Pattinson featured in two of the most popular YA franchises of the noughties. His charming Hufflepuff turn offered a brief glimpse of the charisma to come. While Twilight may not be the film Pattinson would like to be remembered for, kickstarting his leading man possibilities and starring beside Kristen Stewart undeniably set him in good stead.

The King sees Pattinson play Louis, The Dauphin with his most audacious hairstyle to date: a dirty blonde shoulder-length bob that frames his face as if he’s starring in a shampoo advert. A retelling of several William Shakespeare plays, The King charts Henry V’s (Timothée Chalamet) rise to power as he navigates war, politics, and treachery following the death of his father. The Dauphin’s presence is fleeting but nevertheless, he is an omnipresent taunting niggle for the young king.

Opposite Chalamet and his bowl-cut, Pattinson embodies The Dauphin with a questionable French accent but the effete and eccentric demeanor of a power-hungry maniac. He’s introduced hunched over, robe pooling around his limbs as he doesn’t stand to greet the king, an immediate insult to the royalty that stands before him. These interactions unfold with tension that cracks with demented laughter from The Dauphin that spills from him like drink from his chalice. Pattinson makes every sequence in which he appears thoroughly entertaining, he doesn’t need a jester with his wicked sense of humor, toying smirk, and disdain for anyone and everyone who steps foot into his orbit.

The Zellner brothers’ Damsel is an unconventional western in which Pattinson plays Samuel Alabaster, a young suitor who embarks on a cross-country trip through the Wild West to find a preacher to officiate his wedding to wife-to-be Penelope (Mia Wasikowska). With a goatee and cowboy hat, guitar strapped to his back, and Butterscotch (his miniature shetland pony) trotting by his side Samuel’s quest for love is full of offbeat quirks where western conventions are re-written.

Handling this character with charisma, Pattinson has great comedic timing and intuition as he navigates the absurdist twist and turns of the Zellner’s film. He is a wonderfully grounding force as his naive character spirals into the heights of weirdness. We’re even treated to a campfire serenade of ‘Honeybun’, a love song for Penelope that includes besotted lyrics like “You’re a horseshoe to my hoof” sung with Pattinson’s crooning Southern drawl.

Tenet saw the return of Pattinson to the Hollywood spotlight. After so many years avoiding big-budget movies, Christopher Nolan’s Tenet is what lured Pattinson back to the studio produced big-screen epic. Tenet is a divisive film that sees Pattinson swarmed by a mind-boggling, time-warping narrative as he plays Neil a man whose sophisticated accent matches his dapper suit choices.

Starring beside the Protagonist played by John David Washington, Pattinson is a right-hand man who makes for a plucky string in Nolan’s bow. He appears calm even in the most climactic moments, that steely confidence indicative of his approach to future projects. While much of Tenet’s wandering time-bending dealings are hard to unravel on the first watch (even R-Patz admitted he wasn’t entirely sure what was going on), Pattinson’s presence is distinctly watchable. He holds his own beside big league actors. From shoestring indies to a Nolan blockbuster, the leaps Pattinson takes are huge and yet he transforms with ease.

Pattinson’s first post-Twilight film, The Rover offered a seldom role where he could shake his prior character and delve into the tortured mind of a man existing in a dystopian future where hope is slim and bleakness is omnipresent. Pattinson plays Rey, a disheveled man wandering the Australian outback that has become a post-apocalyptic wasteland. He is abandoned after thieves steal Eric’s (Guy Pearce) car – a prized possession that he’ll move heaven and earth to track down.

The Rover was a sharp pivot for Pattinson. A transformational career move that felt like he had something to prove, or perhaps something to shake. David Michôd’s film gives Pattinson the space to breathe complex life into this solitary man who flits between wounded masculinity and singing along to “Pretty Girl Rock” on the car radio – one of the most memorable moments of the film. Rey was the first in a number of serious characters that saw Pattinson become established as an actor tackling the inter psyche with unrelenting conviction.

James Gray’s adventure film sees Pattinson offer a restrained performance against the grandeur of the film in which he stars. Playing the fellow explorer of British office Percy Fawcett (Charlie Hunnam), Pattinson’s Corporal Henry Costin embarks on a treacherous quest in search of a fabled ancient city deep in the heart of the Amazon rainforest. Both men teeter on the precipice of obsession, willing to put their lives on the line for a lost city that may not even exist.

In The Lost City of Z, Pattinson dials back. By relinquishing bold strokes for pragmatic subtleties Pattinson proves himself a distinct character actor who can play the supporting role with as much vigor as if it was the lead. Henry shares the same burning drive of discovery that Fawcett radiates but Pattinson masters the push and pull of a scene that doesn’t have to rely on archetypes to form a striking character. With an understated presence, but a standout shaggy beard, Pattinson solidifies himself as a scene-stealing actor.

Pattinson has largely avoided the lure of the leading man and mainstream blockbuster fanfare, until now. Following in the footsteps of Christian Bale and Ben Affleck, Pattinson dons the suit of Bruce Wayne and his alter-ego in Matt Reeves’ The Batman with an iron-clad grip on shadowy characters. The noir film charts Bruce Wayne’s return after two years of lurking in the shadows and Pattinson’s Kurt Cobain-inspired, emo Batman takes a more personal perspective to the life of Gotham’s vigilante.

Following a life-of-death trail of clues across Gotham City to seek out a masked culprit, Pattinson’s Batman is agile and raw with protruding shoulder bones and a hint of stubble on his sharp jawline. Pattinson throws himself into the high-paced action and daredevil stunts, his unparalleled commitment to realizing character shining through. With the exceptional Zoë Kravitz by his side — who plays Selina Kyle, aka Catwoman, with emboldened finesse — Pattinson effortlessly steps into the heavy shoes of this role.

Disorientating and unhinged, The Lighthouse sees Pattinson and Willem Dafoe edge closer and closer to insanity as two lighthouse keepers marooned on a New England island in the 1890s. There’s a violent storm brewing as both men’s sanity starts to wane from their place trapped in Robert Eggers’ boxed black and white frame. Pattinson plays Winslow, the younger who arrives as an assistant to his elderly supervisor. Winslow is a man of few words but is committed with physical endurance that clears his mind.

The lingering unconscious, however, isn’t simple to ignore. Winslow’s quiet disposition begins a descent into mania where reality and hallucination culminate in sequences of utterly bizarre fever dreams. Pattinson gives over entirely to the bold visuals and memorable script, committing to this stranded story’s absurdity and proving he can keep ahold of adventurous characters amid the most peculiar of features.

Under the exquisite directorial eye of legendary French filmmaker Claire Denis, Pattinson stars in the auteur’s English language debut as Monte. He is part of a small group of death row inmates en route to a black hole in a suicide space mission. Flitting between a dual narrative where Monte and a newborn girl, Willow (Scarlett Lindsay), are the last remaining on the ship and the events that led to the pair being in this situation, High Life is an arrestingly human portrait suspended in the empty abyss of outer space.

In long stretches of silence, Monte wrestles with an unfathomable state of mind: totally alone and navigating fatherhood with a baby who has never set foot on Earth, all she’s ever known is space. An unsettling air blankets this claustrophobic and nightmarish atmosphere before Pattinson’s gentleness offers a respite of calming sanctity. His beguiling performance, told in non-chronological fragments, is earth-shatteringly vivid. Pattinson anchors this emotional sci-fi with unsentimentality that is raw. This is a man piloting a ship heading towards death and yet he clings to hope with all his might.

Good Time features a career-defining performance from Pattinson. The intricately calibrated A24 film from the Safdie brothers sees Pattinson as Connie who, along with his brother (Benny Safdie), is thrown into mayhem when a bank robbery goes awry. It’s an exacting portrayal of determination wilting into desperation as the pair embark on a dark odyssey across New York. Pattinson brings a fierce commitment to the relentlessness and anxiety-inducing criminal thriller. From sweet-talking his girlfriend for money to a brutally cold sternness as he tries to break his brother out of a hospital when he needs medical care, Pattinson tempers all facets of his character with uncompromising nuance. Like a taut string that is going to snap at any moment, he is sharply focused but with wavering nerves.

Good Time puts Pattinson in good stead as one of the most disruptive (very much meant as a compliment) leading men working today. Amongst his uncouth projects that repeatedly reinvent his image, Good Time is the culmination of his stellar performances.