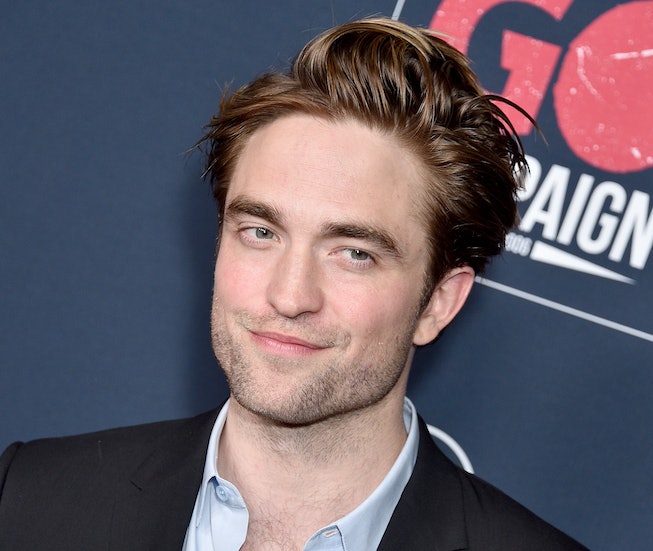 Cooking has become a raison d'être for many people during quarantine. With shelter-in-place orders in effect and many restaurants closed, we have been forced to revisit our kitchens, making use of our cookware and stoves in ways many of us haven't in years — or ever. For some, it's been a privilege, a way to indulge in a pleasurable hobby they might not have had time to before. For others, it's a branding opportunity, as is the case for Selena Gomez's upcoming HBO Max series. But for the rest of us, it's merely an inconvenience, forcing us to face our shortcomings as responsible adults by acknowledging that we don't actually possess an arguably necessary life skill. Such is the case for Robert Pattinson. He may know how to act (as a vampire, as a superhero), but according to a new GQ cover story, the upcoming star of Batman and Tenet doesn't even know how to properly cook pasta. He microwaves it.

It all started last year when the actor had a business idea for "pasta [that] really had the same kind of fast-food credentials as burgers and pizzas." He wanted to create a pasta dish that you could hold in your hand, and was so hellbent on the idea that he even pitched an entire business plan to Lele Massimini, the Los Angeles food legend behind essential establishments like Sugarfish and Uovo.

He decided to call it Piccolini Cuscino, which means "Little Pillow" in Italian.

Unfortunately, Massimini passed on the concept, and Pattinson cooled down on the idea — for a while, at least, until he was being interviewed over FaceTime for the aforementioned cover story and, in an effort to switch up the monotony of talking directly to someone over a phone screen, decided to cook for the reporter, Zach Baron, instead.

The dish? Piccolini Cuscino, of course!

But what Pattinson ends up doing in the story can barely be qualified as "cooking." Things first seem amiss when Pattinson "pours dry penne into a cereal bowl" and "covers it with water." Rather than, say, boiling water on a stove, Pattinson tells Baron, “So obviously, first things first, you gotta microwave the pasta.”

Yes, Pattinson microwaves dry penne. In fact he pops it in for a full eight minutes.

While the pasta is "cooking," Pattinson dives into the rest of his prep, which includes dumping sugar onto a sheet of foil, layering "slice after slice" of cheese onto the sugar-crusted foil ("I found after a lot of experimentation that you really need to congeal everything in an enormous amount of sugar and cheese," he says of his process), adding more sugar atop the cheese for a "sugar crust," and finally (because he forgot this step earlier), placing a layer of crushed-up cornflakes underneath the "sugar-cheese." He then tops the whole thing off with red sauce, and when the penne pasta is done being...microwaved...he takes it out and pours the pasta in. "No idea if it's cooked or not," he says while doing so.

All of this is a (literal) recipe for disaster, but Pattinson keeps going. After mixing everything together, the actor tops it off with a hollowed-out hamburger bun, which he then torches with a "giant novelty lighter." (Naturally, this results in a burn on the palm of his hand.) Finally, he wraps the whole concoction up in more foil and places the entire thing in what he insists is an oven, even as Baron insists that it looks like a microwave. It wouldn't matter so much if not for the pounds of foil, which can be fine in an oven and very dangerous in a microwave. But Pattinson says it's an oven, and so he places his dish inside for the final step.

“The fucking electricity…oh, my God,” Pattinson says, right before hearing a "final bang" that ends with the appliance going fully dark. “Yeah, I think I have to leave that alone,” he says when it's all said and done.

“But that is a Piccolini Cuscino.”

This may sound like fan-fiction, but I guarantee you it is not. This is Robert Pattinson. This is our Batman, our Edward Cullen, our Cedric Diggory, our Christopher Nolan muse. Sure, he may be a talented actor, but such talents clearly do not extend to his culinary prowess.

All this is to say, thank God he's on a meal plan for Batman. He may have starved to death otherwise.