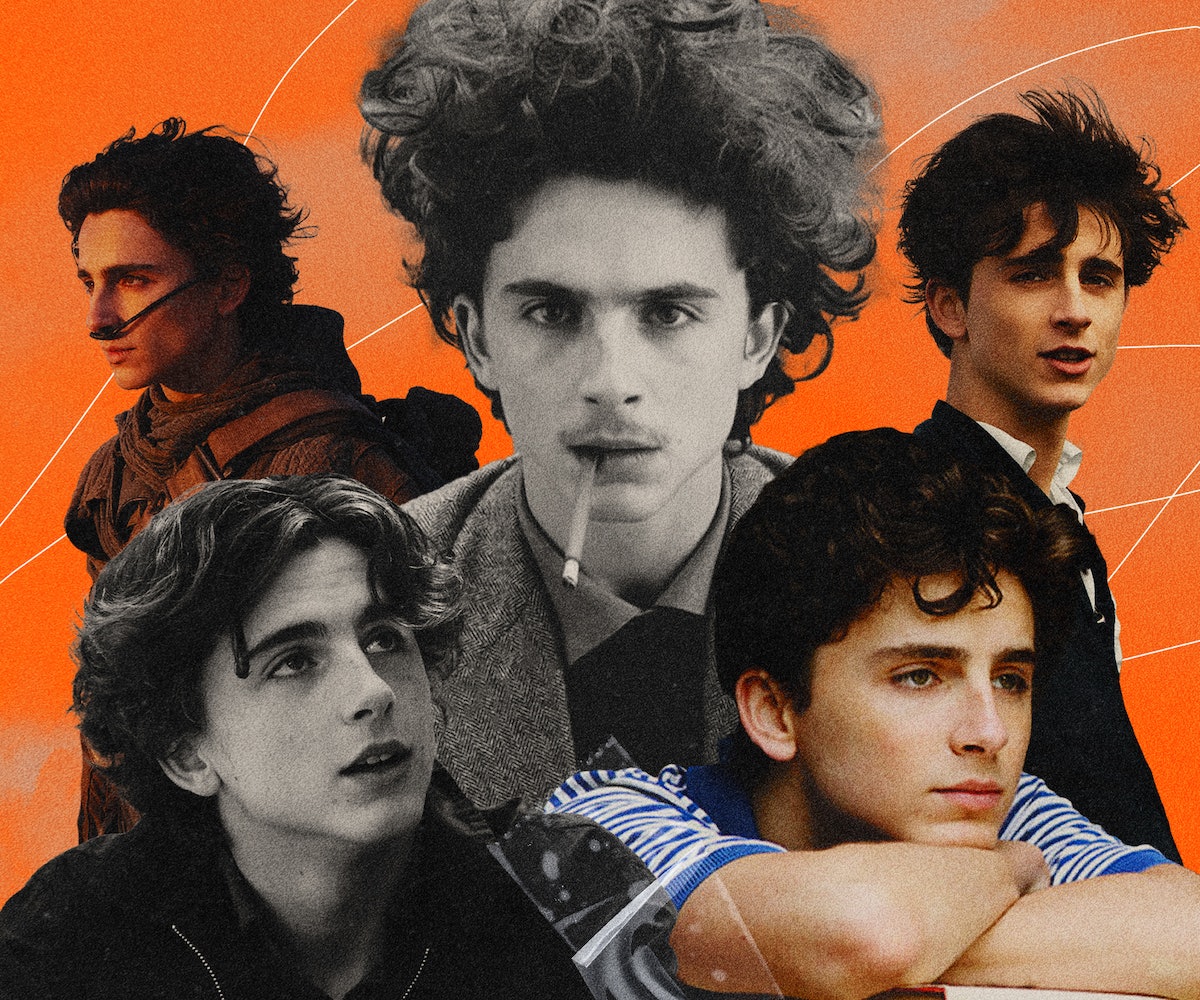 Spanning indie coming-of-age to epic sci-fi adventures to expressive period dramas, the presence of Timothée Chalamet has become synonymous with genre-defying roles, exquisite performances, and a feral mane of curly locks. At just 25-years-old, this generation’s ‘it boy’ has already made his mark, carving a space for himself in today’s Hollywood and ushering in an updated image of the modern leading man.

Chalamet is an actor who has invented and reinvented himself on-screen again and again, all while working with some of today’s most ingenious filmmakers. From the expansive universes of Christopher Nolan to the intimate character studies of Greta Gerwig, his filmography is packed with titles that showcase the range of his transformational abilities. Most recently, Chalamet has starred in Denis Villeneuve’s Dune and Wes Anderson’s The French Dispatch, two very different movies strung together by the compact nuances of Chalamet’s stunning performances.

In another universe, Chalamet would be Spider-Man if he had not lost out to Tom Holland, but in this timeline, Chalamet established himself as well-versed in the acting world as some of the most seasoned actors. With Adam McKay’s Don’t Look Up arriving in December of this year and Wonka and Dune: Part Two on the horizon, NYLON decided to take a look back at the Oscar-nominated actor’s eclectic filmography to decipher Timothée Chalamet’s 10 best movie roles to date.

Perhaps one of the earliest signs forecasting Chalamet’s meteoric rise was that one of his first sizable acting credits was a Christopher Nolan film, an accolade few hold. In Nolan’s Interstellar, Chalamet plays the 15-year-old version of Joseph Cooper’s (Matthew McConaughey) son Tom. While his appearance is slim pickings, it nevertheless established an impressive first big-budget appearance in Chalamet’s filmography.

While he only appears visually in a four-second glance in one of Interstellar’s most iconic moments, it is Chalamet’s young and pained voice that heartbreakingly soundtracks the mourning of a father who isn’t dead but absent. The camera pushes closer on McConaughey as Chalamet’s weighted words coax out an expression that shifts from pride to devastation. Interstellar was Chalamet’s first step on the ladder to movie star status, and what a film to kick off a sparkling career.

Elijah Bynum’s neo-noir crime drama set in the 90s is an emotionally-charged coming-of-age film centered on Chalamet playing Daniel, a sheltered teenager who quickly becomes out of his depth dealing drugs with the neighborhood misfits while he grows infatuated with his new partner’s mystifying sister (Maika Monroe). The over-stylized ​​A24 title is drenched with heady directionless desire but it is Chalamet’s performance as an awkward teen turned profitable marijuana business owner that is one of the few redeeming features of Hot Summer Nights.

Imbuing the coming-of-age archetype with nuance that belongs beyond the scope of this film, Chalamet brandishes this character with the odd charisma of a young man desperately trying to be confident while he tries to ignore the fact he is well over his head. Most impressive is Chalamet’s riveting role in a film that is otherwise generic.

His first substantial feature lead role, Miss Stevens was a chance for Chalamet to demonstrate early inklings of his leading man dramatic potential. He plays Billy, one member of a high school trio who is chaperoned to a weekend state drama competition by their English teacher (Lily Rabe). Harboring the angst of teendom, Chalamet’s performance is riddled with inarticulate feelings and haphazard stumblings through which he expertly maneuvers.

His ability to flip between moods and channel the instability of adolescence becomes especially pertinent in Miss Stevens’ most memorable scene: Chalamet’s delivery of a monologue from Arthur Miller’s Death Of a Salesman. As his boyish grin fades into something painstakingly raw the continuous four-minute-long monologue begins with a close-up headshot of Chalamet. Yet by the end of his recital, we’re watching Chalamet playing Billy playing Biff from the back of the theatre auditorium. A spectacular but simple set-piece, tender confessions bleed into screams scorched with rage as Chalamet’s LaGuardia theatre-kid colors shine.

Chalamet ventures into the medieval 15th century as King Henry ‘Hal’ V of England in writer-director David Michôd’s The King. This historical drama forgoes a bloodthirsty King as Chalamet’s self-proclaimed pacifist Prince Hal is thrust into the spotlight of power after the death of his father (Ben Mendelsohn). However, the capricious Prince very quickly discovers he would rather laze in bed or frequent local pubs rather than deal with the endless responsibilities of sitting in court and protecting the throne.

Holding his own opposite the seasoned likes of Joel Edgerton and Robert Pattinson, Chalamet combines his theatrical prowess with a sensitive reluctance. The young actor commands the frame likes Hal’s father wishes he’d rule the land, emerging from the shadows with a brooding gaze and bowl-cut finish off his draped scarlet robe fit. Chalamet’s magnetism and emotionally dexterity is at ease portraying a young man clinging to the threads of his youth that are coming undone and slipping through his callused fingers.

His first time collaborating with the iconic duo Greta Gerwig and Saoirse Ronan, Lady Bird sees Chalamet reinvent the dirtbag boyfriend as Kyle “that’s hella tight” Scheible; a roll-up cigarette perched between his lips as he reads, he’s a sceptic of mobile phones, and he’s a guitarist in a band – of course he is! Kyle is every cliché in the book and yet Chalamet finds distinct humanity in this bristly young man. He brilliantly plays with the aloof presence and the mumbled tenor of his voice to navigate the angsty male youthfulness of this douchebag character without crossing into archetypal antagonism.

Rebelling against the small-town life in which they’re both embedded, Kyle is a floppy-haired cypher of the escapism Lady Bird so adamantly craves. He’s a character Gerwig pens with resonant relatability — we all know a Kyle-type — and Chalamet is fantastic in bringing Kyle to life. Also, to Chalamet’s credit, he is well aware that the spotlight is on Ronan as the titular Lady Bird and he adapts his presence as a springboard to bolster Ronan’s own brilliance.

Chalamet shares the screen with a star-studded cast in Wes Anderson’s latest cinematic escapade, The French Dispatch. This is an anthology film chronicling three individual tales in its overarching ode to print journalism. One story is the narrative thread of Chalamet’s Zeffirelli, a student spearheading the liberation movement. Appearing opposite the acclaimed Frances McDormand, he sports a mustache and his most untamed hairstyle to date.

In between writing manifestos in the bath, arguing about journalistic integrity and inciting riots, Zeffirelli is a barrage of youthful ambition in the whimsical world of Wes Anderson. While his role is rather miscellaneous in screen time, nevertheless The French Dispatch is another chance for Chalamet to work with a renowned auteur and develop his scene-stealing abilities and malleable articulation.

Perhaps the most brutal film in Chalamet’s oeuvre, Beautiful Boy reaches unfounded levels of emotional and psychological torment from Chalamet. An autobiographical film based on memoirs from father and son David and Nic Sheff, Beautiful Boy is a remorseless portrait of a family being fractured by the perils of addiction. Starring opposite Steve Carell, who plays his father, for both actors this is the arrival of dramatically hardened performances.

Chalamet’s frame becomes emaciated by the brutality of addiction and its unforgiving cycles of relapse and recovery. In this film, more than any of his previous roles, it is the physicalities of Chalamet’s performance that produce an agonizing image. His body is a finely tuned transformational instrument; sometimes he curls in on himself slumping under the suffocating force of regret and other times his limbs flail uncontrollably as he rides a high that will inevitably lead to another crash. Sensitive and gritty, Beautiful Boy exhibits Chalamet’s ever-evolving intuition Chalamet has with unravelling the psychology of his characters.

The first time we are granted a glance of Chalamet’s Theodore ‘Laurie’ Laurence in Little Women, he is in glorious slow-motion whisking through the autumnal streets of Paris, coattails floating and curls billowing in the breeze. The adaptation of Louisa May Alcott's novel of the same name sees Chalamet reunite with Gerwig and Ronan and while Little Women is indisputably centred on the March sisters — Jo (Saorise Ronan), Amy (Florence Pugh), Meg (Emma Watson), and Beth (Eliza Scanlen) — Chalamet’s Laurie, the doe-eyed boy next door, still manages to charm his way into a multitude of scenes.

One of Chalamet’s greatest accomplishments in this film is the push and pull of his presence; he knows when to rest in the background to let his scene partners take the lead then when to plough forward and take the scene into higher emotions. It ends up being on a hillside with Ronan where Chalamet’s performance peaks. “I have loved you ever since I’ve known you, Jo. I couldn’t help it!” He cries, admittance turning into desperation as he pleads for her adoration. Chalamet’s controlled gaze flits between longing and devastation as he bows his head to absorb the rejection. It’s one of Little Women’s many sublime moments featuring some of today’s finest young actors waltzing through a scene with astonishing gravitas.

Based on Frank Herbert’s dense 1965 science fiction novel, Denis Villeneuve’s Dune is an epic blockbuster to which Chalamet proves the perfect lead. Set in a dystopian future, prophecies tell of a messiah that will ward away the malevolent forces that have amalgamated over an exclusive supply of a precious life-enhancing resource. Chalamet plays the son and the ducal heir of the noble Atreides family. His name… Paul.

Wandering mountainous sand dunes, having wild dreams, and pouting as angsty tears hit his sharp cheekbones, Chalamet’s performance in Dune is remarkable. Like a thunderous crashing wave of unleashed fervour, he shoulders the universe’s attention like a bonafide movie star. Years of mastering arthouse film acting have prepared him for a visceral role like this and the cobwebs of worry that Chalamet would be buried by the scale of a blockbuster are instantaneously brushed away. While we’re still mourning Zendaya’s 7 minutes of screen time, there remains so much to admire about Chalamet’s in Dune.

This is the Timothée Chalamet film. It was Call Me By Your Name that put him on the map with an Oscar nomination for this defining performance that he will be undoubtedly linked to for years to come. Playing 17-year-old Elio in a 1983 sumptuous Northern Italy, Chalamet embodies the dualities of exuberant youth and coming to terms with the heartbreaking realities of adulthood over the course of a summer. While he famously defiles a peach in this film, Call Me By Your Name also boasts Chalamet drenched in sunshine delivering a monumental turn attuned to the rite of passage infatuation that is pinnacle to the adolescent experience.

Gloriously languid summer days, delicious breakfast banquets, and hazy nights become a backdrop to the radiant golden glow Chalamet emits as the beguiling Elio. While his deeply felt and resonant performance is entirely impressive, Chalamet drives this film home with a stunning final scene before the flickering fireplace. They say the eyes are the window to the soul and here Chalamet’s steady gaze recounts a summer of love and loss with searing conviction. Fine-tuned emotions drop one by one like delicate petals; devastation, sorrow...and then poignant melancholic acceptance. A breathtaking final moment that proves Chalamet an absolute master of his craft.