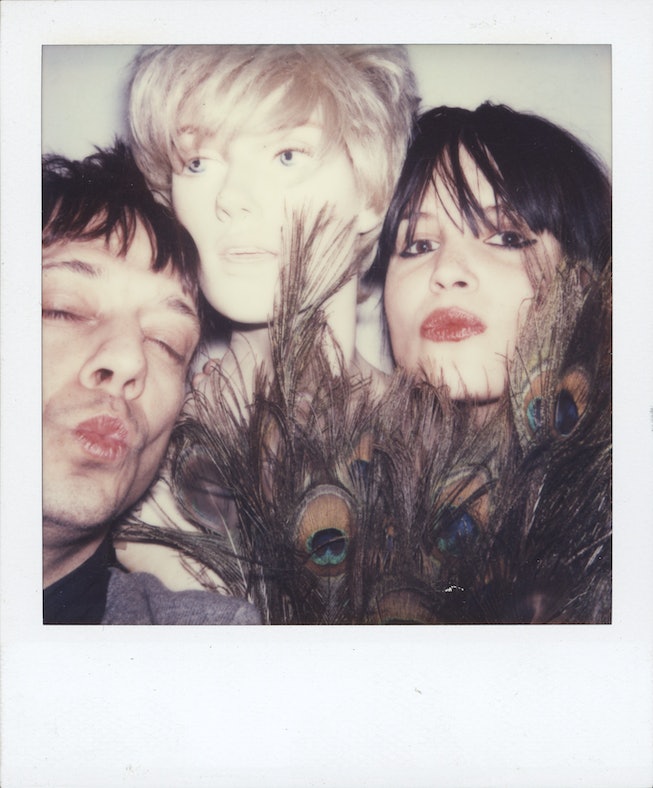 The music industry isn’t known for looking backwards. Unlike fans who go to shows hoping bands will “play their old stuff,” the music industry requires working musicians to surrender to the vicious cycle of writing, recording, touring: rinse and repeat. Despite this, or maybe because of this, fans craving a band’s “old stuff” is a cliche. But a lot of times, a craving for the past isn’t a rejection of who a band is now: It’s that people want something that is closer to an artist’s core, something that’s more stripped down, raw and vulnerable.

The Kills, the seminal indie rock band known for chain smoking on stage in leopard and leather, made up of Jamie Hince and Alison Mosshart, has been in the tour cycle for nearly two decades. But now, they’re looking back, as the reliable wheels of the trend cycle go full speed towards resurfacing the golden age of indie sleaze. On June 3, The Kills reissued their classic 2005 album No Wow — a gut-punch of indie rock snarl, raw, feedback-soaked guitars, and heart.

“It’s been emotional to learn these songs again,” Mosshart tells NYLON. “It was so much the beginning of our career. Everything was new and exciting and terrifying and wonderful and I remember us being in New York for months and it transports you back, but it’s really interesting to listen to the second record you ever wrote and see how you progressed as a songwriter or how your ideas change.”

“I think that was one of the sighs of relief listening to No Wow again,” Hince says. “Like, it’s just me and Alison, a couple of light bulbs and a drum machine, two amplifiers. I sort of have a bit of trepidation of it being stripped down because you’re really vulnerable, but I’m excited to do shows like that.”

“It’s like looking at yourself in a yearbook,” Mosshart adds. “It’s pretty wild.”

It’s been 17 years since the release of No Wow. Why did you want to reissue it?

Jamie Hince: A lot of it really came from the lockdown problem. Timing is impeccable; we finished touring in the winter of 2019 and sat down to write a new record and all this stuff started happening. Time sped up and life slowed down and on the one hand everything stopped and on the other hand you have this creative road ahead of you – this open road that you can create whatever you want. We didn’t want to put out a new record even though we were writing lots of new songs. Domino, our record label, suggested things we could do to put music out and it felt like a really good time to reissue No Wow because the record was out of print. You couldn’t get it anymore and as everyone knows on streaming platforms, older albums get buried.

What has the experience been like? Has it been emotional at all?

Alison Mosshart: It’s been emotional to learn these songs again. It’s been really wild actually. Jamie and I did this record in New York and it was so much the beginning of our career. Everything was new and exciting and terrifying and wonderful and I remember us being in New York for months and it transports you back, but it’s really interesting to listen to the second record you ever wrote and see how you progressed as a songwriter or how your ideas change. It’s like looking at yourself in a yearbook. It’s pretty wild.

Hince: With the first record, we had the luxury of time and the second record was that cliche –

Mosshart: Oh my god – hurry up!

Hince: Exactly. It's just kind of confusion and fear and the excitement and the anxiety of making a second record and I think for those reasons, it never sat that comfortably, until now. Like Alison said, we are rehearsing and listening to the record, and it’s like okay, there’s actually not distance now.

Mosshart: I’m really proud of it. It’s so weird. I love it. I don’t know what brain I had, but I love that brain.

Mosshart: Jamie, I don’t think that you and I had cell phones at that point, which is such a strange concept to think about.

Hince: There’s a shot in the [music video] where we’re sitting in a diner and I’ve got this weird flip phone I think we borrowed and it’s the strangest thing. It’s a nice window into that time. Listening to that record was obviously different criteria. It wasn’t perfect production or complexity or even virtuoso playing. It was something really different: simple, heartfelt attitude, and it's just nice to hear it.

Mosshart: What’s interesting re-doing this record is we had Tchad remix it from scratch. We’ve been working with Tchad for the last like three records to mix things and I wondered what it would sound like if we were mixing for today. I thought it would be a fun experiment, and it was and it was incredible what Tchad did. There’s no bones to this thing; it’s just sonically fuller and more powerful, and it’s interesting to hear it like that. I think we recorded one more record on tape and this record was on tape and we had these tapes sitting in our flat in London for almost 20 years. We had never opened them since the day the record had been mixed. We sent all these tapes to Tchad and it’s like opening a coffin. It had this interesting bleeding going on like cross talk where the tape has been touching itself, so there are strange echoes that are naturally occurring because of time and age. It’s incredibly beautiful.

The release of this record feels particularly timely because we have this nostalgia for the indie sleaze era right now. Is that something you think about?

Mosshart: Well that’s good, that would be nice if we were right on time. We never know what’s going on. I like that there’s also an appreciation again for vinyl records. The reason we put this out again was because it was out of print and nobody was able to buy it for years. I always think it’s important to have those things available for people because I personally love records, so there’s those two things: people can actually own this record, and it’s nicer to look at this way than streaming it in my opinion, but call me old fashioned.

How does it feel to relearn these songs again? Are there any that you wish you dusted off earlier?

Hince: I’m slowly getting this muscle memory back; it’s kind of fascinating and surprising to me the songs I turned down so low and I realize what I’ve done – it just sounds darker and more horrible than that standard tuning. It doesn’t sound so jangly, so some of the decisions I made were quite sort of –

Mosshart: Bizarre. It’s so wild to think of some of the songs I wrote when I was 22 or something. It's really fun and the lyrics are really fun and I'm like, “How did I think of that? That’s so strange, I love it.” I wish I still had that brain. Time passes and you’re always playing the last thing you did. We don't typically spend any time in our career looking backwards, and nobody really does when you’re putting out new records all time, so it’s an interesting thing to do.

Hince: I don’t think we could have done it without the record company suggesting it and being excited about it. We really don’t like looking back.

Mosshart: Well, there’s never time. During the pandemic we put out a record called Little Bastards and that was fun to put together because it was a million lost tracks that we loved and we were like, “Wait what seven-inch is that one? Which year did that come out? We didn’t play that. I don’t even remember us recording.” There was a lot of that stuff and the body of work that we've done is extraordinary. It was really fun to look at that stuff again and it was fun to compile it for people. When you can’t go play gigs or record new things it’s a good time to appreciate everything you’ve done that you’ve f*cking forgot about.

Do you think revisiting this album will inform any current or future work?

Mosshart: We’ll see. We’re kind of in the middle of recording. I think so. I think everything is inspired by everything else. It’s been a really nice experience, so I don’t think we’re going to forget it.

Hince: It’s made me love playing guitar and love the sound of the guitar and I know that sounds like an obvious thing to say, but since writing lots of new songs, I haven’t been conceiving with guitar. I kind of got sick of guitar and playing No Wow now, I couldn’t feel more opposite.

No Wow is out on Domino Records now.