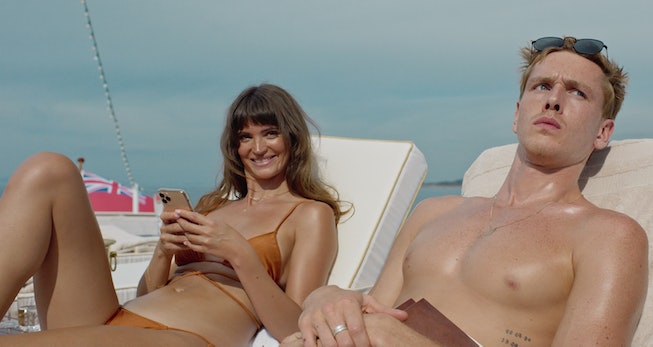 Over the past several years, the Cannes jury have succeeded, again and again, in awarding their prestigious Palme d’Or award to films that would later go on to become some of the best of their respective years. Though last year’s winner, Titane, failed to translate with Oscar voters, the car-f*cking, gender-bending, titanium-fueled sophomore film from director Julia Ducournau quickly became a cult hit. 2011 winner The Tree of Life is still widely considered one of Terrence Malick’s best offerings, while 2018 winner Shoplifters is often brought up in conversations about the ideal way to tell stories about people living on the fringes of society. Oh yeah, then, there’s also that little film you might have heard of called Parasite. Bong Joon-ho won the award in 2019.

NEON (who, coincidentally, also handled distribution for Parasite and Titane), is clearly hoping that this trend will continue for their latest release, Triangle of Sadness, the most recent recipient of Cannes’ most prestigious award. Written and directed by Ruben Östlund, the film quickly became the talk of the French resort town thanks to the eight-minute standing ovation it received after its world premiere; no one was surprised when the film was announced as the Palme d’Or winner a week later. (In a rather iconic feat, the director’s last film, 2017’s The Square, also won the Palme d’Or after its Cannes debut.) Critics hailed the film’s sharp satire, and now, the general public will be able to offer up their own reviews when the new film hits theaters on October 7 (shortly after making a stop up north, at the upcoming Toronto International Film Festival).

According to a plot synopsis, Triangle of Sadness follows a “celebrity model couple, Carl and Yaya, [who] are invited on a luxury cruise for the uber-rich, helmed by an unhinged boat captain.” Of course, this is an Östlund film we’re talking about at the end of the day, so naturally, things don’t go according to plan for our pretty protagonists. “What first appeared Instagrammable ends catastrophically, leaving the survivors stranded on a desert island and fighting for survival.”

The cast is headed up by The People vs. Larry Flynt’s Oscar-nominated Woody Harrelson as the boat’s captain, while Beach Rats heartthrob Harris Dickinson and Black Lightning beauty Charlbi Dean star as the celebrity model couple. (Can you blame the casting directors?) Other members of the ensemble include Dolly De Leon as Abigail, Zlatko Buric as Dimitry, Iris Berber as Therese, Vicki Berlin as Paula, Henrik Doris as Jarmo, Jean-Christophe Folly as Nelson, Amanda Walker as Clementine, Oliver Ford Davies as Winston, Sunnyi Melles as Vera, Arvin Kananian as Darius, Ralph Schicha as Uli, Alicia Ericsson as Alicia, and Carolina Gynning as Ludmilla.

Judging by the freshly-released trailer, Triangle of Sadness is poised to offer up tons of laughs — at least for anyone who gets off on jokes where obscenely wealthy people are at the stinky butt. (Pun totally intended, there’s a lot of poop here.) From the empty vanity of the fashion industry (“So, is this runway casting for a grumpy brand or a smiley brand,” an interviewer seriously asks in the trailer’s opening moments) to the normalized mistreatment of service workers (“I don’t want to hear anybody saying ‘no.’ It’s always, ‘Yes, sir! Yes, ma’am!’ a supervisor informs the ship’s employees), seemingly nothing is off-limits in Östlund’s newest “wickedly funny” satire.

And for a movie proudly featuring projectile vomit, exploding toilets, “Russian capitalists and American communists,” and guests who demand that the “sails” be cleaned on a yacht that doesn’t even have sails to begin with, I guess that makes perfect sense.

Check out the trailer for Triangle of Sadness below before the film hits theaters on October 7.