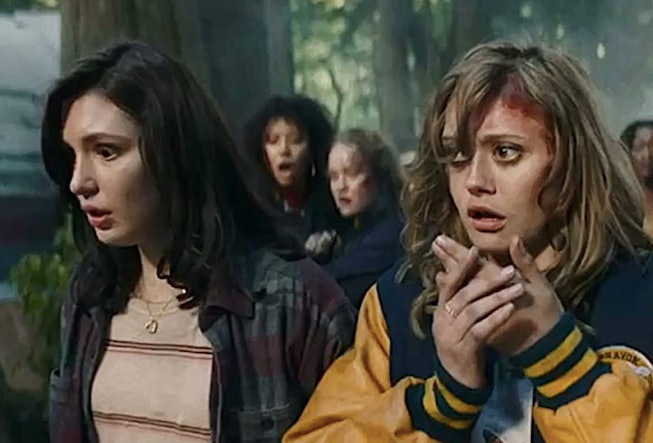 It’s been almost four months since Yellowjackets concluded its first season. But after delivering a riveting, world-expanding finale that seemed to pose more questions than it actually answered, it’s only understandable that we’d all be waiting with bated breath for signs of season two.

And, well, voila. Variety released some new information about the highly anticipated sophomore installment of the word-of-mouth Showtime hit, including when the series would go into production, what the season has been informally titled by the creators, and what viewers can expect to see in the upcoming episodes.

Below, find out everything NYLON knows about season two of Yellowjackets.

Production is set to start this summer.

The good news? Season two of Yellowjackets will start filming as early as “late summer,” according to showrunners Ashley Lyle and Bart Nickerson, making Showtime President Gary Levine’s initial call for an “end of 2022” release date not an entirely unlikely possibility. (Wow, remember when shows could just be expected to return a year after their premiere?)

There is no word yet on where they will be filming the new episodes, however.

The new episodes are still being written.

Though pre-production is almost surely already underway, apparently, the new episodes have not yet been finalized. In fact, Lyle, Nickerson, and co-showrunner Jonathan Lisco revealed that their writers’ room for season two is “just getting started on the actual scripts” for the new episodes, though they have all been brainstorming “for several months now.”

We will get to see what happens to the girls in the winter.

In season one of Yellowjackets, many of the stranded titular soccer players feared for the impending winter season, when fending for themselves on a deserted island would prove far more difficult. Already, the show has hinted at those dangers — remember when Jackie (Ella Purnell) literally froze to death on a night that wasn’t even supposed to be cold, let alone one that was supposed to produce snow — and season two will peel back the layers even more.

Though production is slated to take place during the sunny summer, the team has assured us that they are “definitely revisiting the winter storyline.” In fact, Lyle says that the new season has been titled “The Winter of Their Discontent,” in a playful nod to John Steinbeck’s seminal final novel and the famous first few lines of William Shakespeare’s Richard III.

Many members of the star-studded cast are expected to return.

While there was much to enjoy about Yellowjackets in its inaugural season, few things drew more eyeballs towards Showtime’s most recent hit than its sprawling cast, which featured an enviable mix of 90s stars and rising members of Young Hollywood alike.

Christina Ricci, Juliette Lewis, Tawny Cypress, and Melanie Lynskey were all welcome returns to the screen, and all four actresses are slated to return for round two. Lynskey, especially, has much to celebrate now. Two months ago, she won the trophy for Best Lead Actress at the Critics Choice Awards, and her teary-eyed acceptance speech quickly went viral online.

On the “teen” side of things (though most are adults), we can expect returns from Sophie Nélisse, Jasmin Savoy Brown, Sophie Thatcher, and Samantha Hanratty, since all of their adult counterparts are slated to return too. And with the season finale reveal that Adult Lottie was somewhere out there wreaking havoc, we can expect to see more from Courtney Eaton too.

But what about everyone else? After seemingly freezing to death in season one, it’d be easy to believe that Ella Purnell’s stint on the show had reached its natural conclusion. But on a show this unpredictable, who can ever really say! Ditto for fellow teens Liv Hewson, Jane Widdop, Keeya King, and Alexa Barajas, as well as for the boys Kevin Alves and Luciano Leroux. In the flashback storyline, everyone was still alive, last time we checked in. Will they still be in season two?

Thanks to the skilled directorial eye of Jennifer’s Body auteur Karyn Kusama, Yellowjackets immediately set a solidly recognizable tone as a very dark drama that occasionally allowed moments of levity and humor to slip in. Though that darkness was often figurative (a measure of tone more than anything else), it could sometimes be quite literal — especially when it came time to film the girls in the woods. The creators have promised more of that for season two, but how is that supposed to be achieved if the new episodes are being filmed in the summer?

“We’re starting those production conversations and we have some really amazing and creative people on our team,” Lyle told Variety about this proposed dilemma. Claiming that everyone “will have to get very creative on the production front,” Lyle still felt comfortable that the series would deliver the spooky, dreary winter vibes viewers have come to love and anticipate. “This will be movie magic at play.” I’m scared for that production budget…