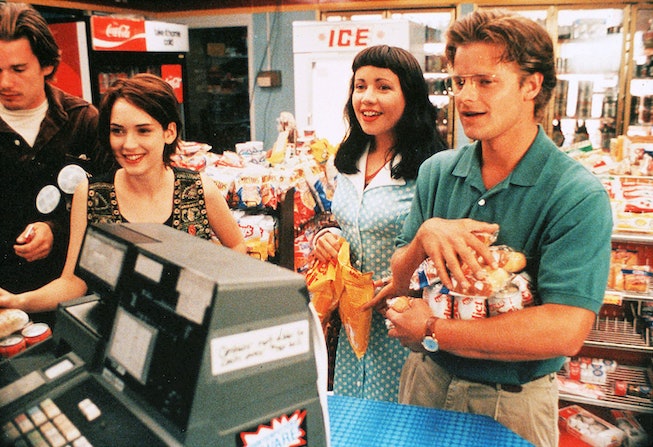 A24 is not only known for releasing some of Hollywood’s indie classics but the company is known for serving fans the most interesting collectible goods from auctioned-off show props and costumes to horror-ridden cookbooks. Like nearly every film studio at the moment, A24 is jumping on the early-aughts nostalgia bandwagon with a collection that’ll for sure bring back all of the feels, especially as the holiday gifting season picks up.

On Tuesday, Nov. 30, A24 announced the launch of its newest capsule line of vintage merch, this time taking inspiration from some lesser-known, cult classic films of the past. Partnering with New York-based home goods brand Intramural Shop, the throwback collection is set to feature an array of curated and collectible items, ranging from printed tees, embroidered caps, and even coffee mugs. The first drop on Wednesday, Dec. 1, is one of three vintage capsule collections, which are planned to roll out in the coming months.

The vintage merch collection includes a total of 38 items taken from past films produced by some of the biggest names in entertainment, like Columbia Pictures and HBO, as well as film festivals Cannes and NYFF, and old-school tech companies like Industrial Light+Magic and LaserDisc. Within the upcoming release, some stand-out pieces include a white tee stamped with the 1998 title Wild Things ($100), a teal-colored 1972 Academy Awards baseball cap ($55), a blue and yellow Blockbuster duffle bag ($60), a silk Armani scarf printed with the face of legendary film director Martine Scorcese ($85), and a beach towel with a still from the 1994 hit film Reality Bites ($80).

Bijan Shahvali, founder of Intramural Shop, sourced the coveted pieces from all over the globe, in addition to pulling items from his own personal collection and of friends within his vintage network. “I was thrilled when A24 reached out because I think they really embody all the things I love about film,” Shahvali exclusively told NYLON in an official statement. “My goal for this curation was to celebrate all the different aspects of the film experience that we are all nostalgic for — the blockbusters, the arthouse, theatre, the emergence of cable television, and everything in between — while still feeling very much like A24. I also wanted the collection to be something film buffs and filmmakers alike would get a kick out of.”

Gift the movie lover in your life for the holidays or add onto your own merch collection with items from A24 x Intramural Shop’s vintage merch drop, available to shop starting on Wednesday, Dec. 1, on A24films.com.