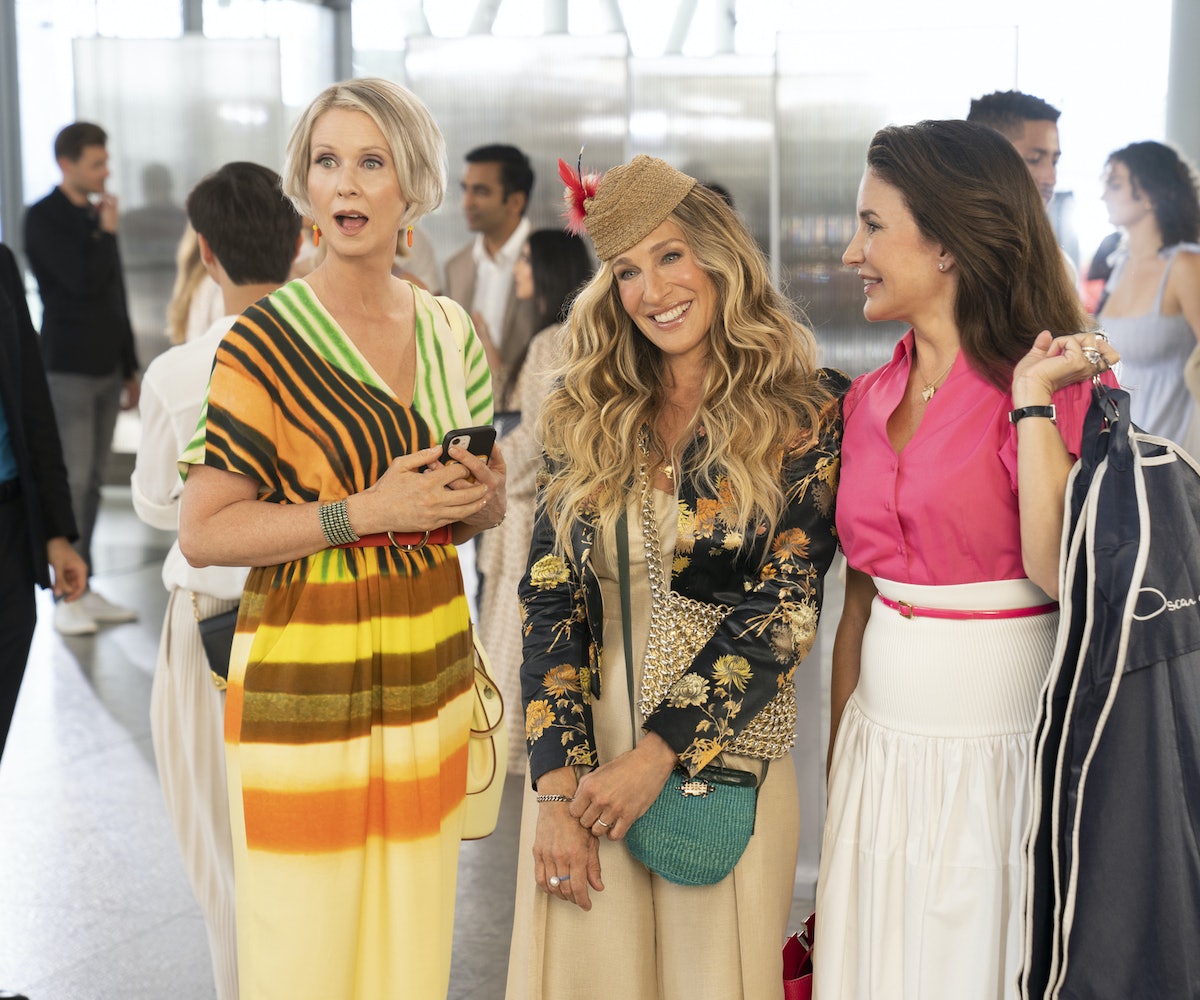 For Sex and the City’s 2021 reboot, And Just Like That..., beloved on-screen friends Carrie Bradshaw (Sarah Jessica Parker), Charlotte York (Kristin Davis), and Miranda Hobbes (Cynthia Nixon) return for what’s presently regarded as one last rendezvous. The 10-episode series from HBO Max will pick back up on the theme of navigating life and relationships, except naturally, the leading women are now in their 50s. There’s also an onset of fresh faces (actors Sara Ramirez, Nicole Ari Parker, Karen Pittman, and Sarita Choudhury are among the newcomers to the AJLT cast), and similarly, a few names from the show’s original run, such as Kim Cattrall, who played the sexually-empowered publicist Samantha Jones, and Patricia Field, who led costume design for SATC’s six seasons and two succeeding movies, have notably opted against returning for the reunion.

At its core, though, it seems not much has changed. For one, both Parker and Pittman have promised fans a heaping dose of what matters most: sex. Meanwhile, would it be a true reboot of SATC, the show that sparked the fashion collective’s unwavering love affair with Fendi baguettes and the little black dress, without a slew of over-the-top outfits? Judging by sneak peeks across social media, and the final few seconds of the AJLT trailer, wherein Carrie opens her closet door to unveil a wall of shoes (likely Manolo Blahniks) before uttering, “Hello, lovers,” there’s plenty to digest in the coming weeks.

This time, costumes for Carrie and her crew are the brainchild of Molly Rogers, who worked alongside Field on the entire SATC series and its spinoff films and is also behind The Devil Wears Prada, Ugly Betty, and Hunger Games, and co-costume designer Danny Santiago, who also worked on both SATC movies as well as Confessions of a Shopaholic.

Ahead, Rogers and Santiago share insight into bringing the city’s main characters back to life, 17 years after the SATC’s ending, along with cultivating the wardrobe identity of AJLT’s new characters, and doing it all while Instagram watched closely.

Age didn’t play as huge of a role as you may have thought.

Sex scenes and bare midriffs took center stage when SATC debuted in 1998 (thanks, in particular, to Carrie and Samantha). As speculation swarmed around AJLT, the main focus of audience interest was on how the show would navigate the characters’ new stages of life without jeopardizing the original show’s integrity, so much so that Parker even addressed some of the misogynistic comments that have been made. However, Santiago says the age factor didn’t come into play the way many may have expected, especially with regard to costuming.

“Personally, I don’t like numbers, especially on me,” Rogers tells NYLON. “So we ignored it in a way.” Instead, the evolution of the cast’s wardrobes was driven mostly by what’s new in fashion. “I feel like [we went with] whatever we saw out there that we thought we could bring into the style the girls already had,” adds Santiago. “Especially with Sarah Jessica, her being so eclectic and so about dressing for her own person; she’s always been sort of driven by her moods and how she feels, and she’s not afraid of anything. I feel like the girls are who they are.”

Instagram acted as a tool for sourcing young designers.

Household high-end designer names are ingrained in SATC’s DNA, and its characters are no strangers to the likes of Christian Dior, Vivienne Westwood, Hermès, or Halston. But this time around, Rogers and Santiago gave a nice chunk of screen time to emerging and BIPOC-owned brands, as well. “I have to say, I don’t want to be ruled by an overlord,” Rogers says. “But Instagram helped me wipe my perspective so much. [Through the platform], I could meet small, unknown designers. It was so helpful in meeting Rodney Patterson, who’s this amazing Brooklyn hat designer. That’s how I found him.” When an Instagram account unaffiliated with the show started to post behind-the-scenes paparazzi photos and a directory to the pieces worn by the actors while filming, fans also caught a glimpse of a forest green “Kuei” bag by Brandon Blackwood, another Instagram find, Santiago says, during what looks to be a picnic scene.

While Rogers and Santiago leveraged social media for fashion discoveries, it became a weapon formed against them, as well. With the amount of anticipation surrounding Carrie and her friends’ return to the screen, along with an Instagram account highlighting the show’s costumes in real time as filming took place, it’s no surprise onlookers felt compelled to express their opinions — and there were lots of them. However, the feedback didn’t bother the costume designers so much as the idea of too much being revealed too soon.

“I was very disappointed that, for the fans, [the outfits] were becoming overexposed, and there weren’t going to be enough surprises, or enough [looks] kept secret,” recalls Rogers. “I could honestly care less about the judgments; it makes no difference to me at all. What happened in the fitting room was magical and fun. We loved it, and we backed it, and we stand with it.”

“We really went with what we felt was right,” Santiago chimes in. “When people actually watch the show and see what the story is like, I think it’ll make a lot more sense to them as far as why certain things were worn. Plus, [when the actors are] coming out of trailers, they aren’t always put together. They’re wearing comfort shoes or a comfort coat over their [costume], and people would mistakenly think that was the actual look they're wearing as they were going to be shot.”

“There’s not that much to introduce, in our opinion, with the [original] girls, but there was certainly a lot to discuss with the new characters,” Rogers says. “You can imagine coming into our fitting room — it’s a little daunting. There’s 12 people standing around, just choosing a belt for you … But we had so much fun with the new [actors].” When Michael Patrick King, the writer and director behind AJLT, presented the duo with the script — the entire season in one sitting, which, according to Rogers, never happens — they jumped headfirst into shopping and moodboarding. Oftentimes, though, their direction for a character’s wardrobe may change after the role is actually cast.

“We had a great inspirational icon in mind for Sarita Choudhury’s character,” she says. The English actor joins the show as Seema Patel, a single real estate broker and a friend of Carrie. “She was so panther-like and so slinky, with a honey skin color. We were like, ‘We have to do our version of Bianca Jagger.’” The iconic Norwegian actor and model was also known as the queen of Studio 54, the former Manhattan disco nightclub, so the reference feels fitting for more reasons than one. “[She has the] big, black gorgeous hair,” Santiago says. “​She really felt it when we made that connection with how we were going to go with the character. She fell right into it.”

There is a lot of vintage, at a certain someone’s request.

Of all of the unforgettable SATC quotes, we can expect one from Season 2 that still rings true. You know, the moment when Carrie is out shopping for a $7 presumably-vintage dress to match her $300 shoes. “Sarah Jessica wanted a lot of vintage, and we were happy to oblige,” Rogers says. “She truly loves the ‘finds’ and the provenance of a piece. We actually had two pieces ‘dry-rot’ off of her as she was filming.” Santiago says they incorporated vintage into the wardrobes of other characters, as well, but it wasn’t particularly to evoke nostalgia: “Nothing’s ever worn in the way that it was actually originally put together or styled. We’re not going back to do a ‘90s look — we’re just using a great piece of fashion that we can incorporate into something that looks modern, you know?”