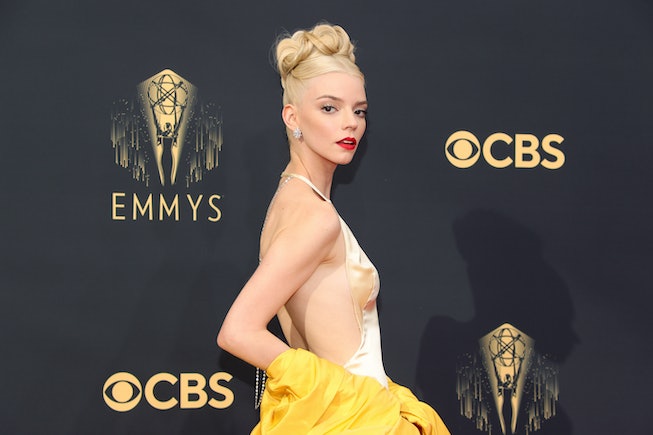 Anya Taylor-Joy arrived to the 2021 Emmys red carpet wearing Dior Haute Couture. The Queen’s Gambit star is nominated for her first-ever Emmy Award, for Outstanding Lead Actress in a Limited Series or Movie.

Styled by Paul Burgo, Taylor-Joy paired her bright yellow look with jewelry from Tiffany & Co., including two Elsa Perretti necklaces that draped down her back, as well as diamond-and-platinum earrings and a bracelet and ring made from platinum and 18-karat gold, adorned with yellow sapphires. (In case you missed it, she joined the luxury jewelry brand as one of its ambassadors earlier this year.)

Sunday night marks Taylor-Joy’s Emmys debut, but she’s no stranger to serving glamour on the red carpet. In February, she attended the 2021 Golden Globes, also in a Dior Haute Couture gown, and won the award for Best Actress in Miniseries or Television Film for The Queen’s Gambit. Perhaps she’ll add an Emmy to her trophy self on Sunday night?

Editor’s Note: This post has been updated from its original version to clarify Anya Taylor-Joy’s stylist. Paul Burgo, not Law Roach.