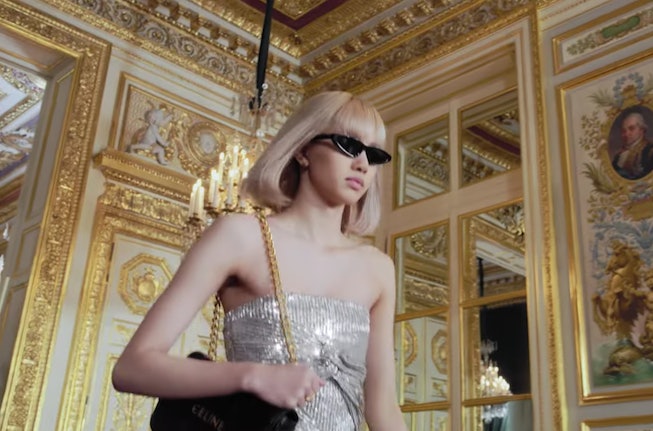 Though we didn’t see any Celine looks at the Met Gala, creative director Hedi Slimane presented a brand new runway collection instead. On Wednesday, May 4, the French fashion house revealed its Winter 2022 women’s show, titled “Dans Paris,” which took place at both the Hôtel de la Marine and Hôtel National des Invalides. Blackpink’s Lisa also returned to the runway, following her debut walk for Celine’s previous show back in December 2021.

The K-pop solo star, who’s been global ambassador for the brand since 2020, was easily spotted in the show for her signature blonde bob and bangs. (Though, we noticed a hint of pink in her hairstyle, too.) Lisa was dressed in two runway looks from the new collection, serving as the ultimate inspiration for our next going-out ensemble. For her first appearance, she wore a strapless silver sequin mini dress with chunky black boots, a chain-link handbag, and sunglasses, along with a second sighting later in the show dressed in a black sequin mini dress, a moto leather jacket, and the same trio of accessories.

Celine’s latest runway show’s two locations in Paris were not only eye-catching backdrops for Slimane’s go-to video format to present his latest collections, but they both marked some milestone moments for the brand, as well. The gilded “Salons D’Apparat” at the Hôtel de la Marine is an 18th-century room that historically used to showcase royal collections and artworks to visitors and was later converted into a reception space. Since its recent restoration, Celine is the first to hold a runway show and shoot a campaign within the venue. The Hôtel National des Invalides was Slimane’s location of choice for his debut runway show for Celine in 2018.