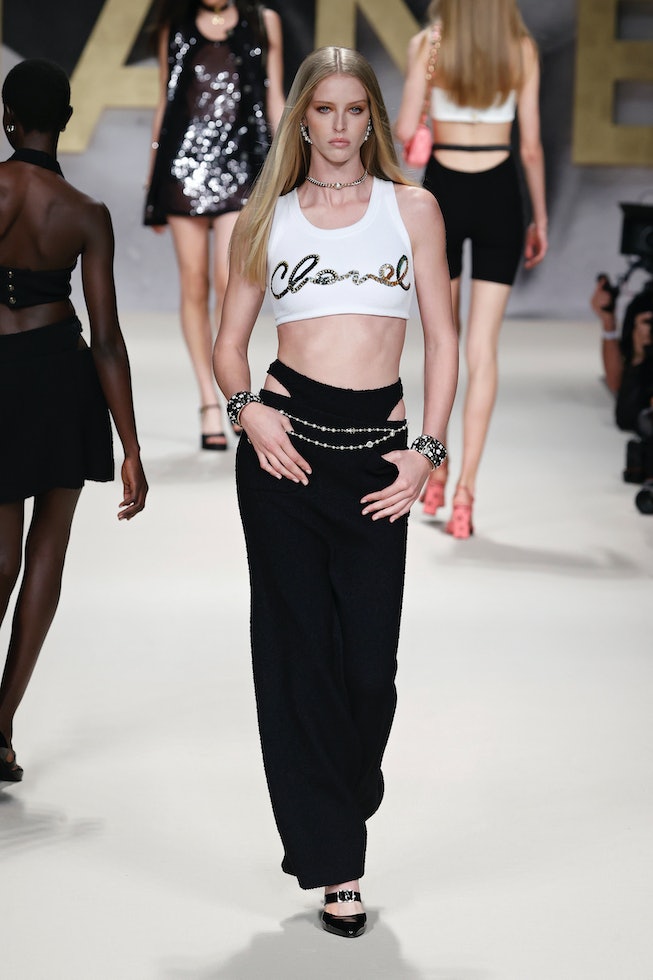 We’ve reached the final day of Paris Fashion Week, which kicked off with Chanel’s Spring 2022 collection. Kristen Stewart was in attendance, of course, as were Lily-Rose Depp and Blackpink’s Jennie, but what we instantly noticed was the French fashion house’s co-sign of a particularly polarizing fashion trend: pelvic cutouts.

The look first came onto our style radars back in August, when Bella Hadid was spotted wearing her viral “ovary pants” in Paris. Kim Kardashian hopped on the trend, too, as well as Dua Lipa and Rihanna. On the runways, more subversive designers like Dion Lee, Cult Gaia, and Jonathan Simkhai, already included the look in their Fall 2021 collections, so, thanks to Chanel, this trend is staying strong well into the warm-weather months of 2022.

This type of approval from a major fashion house is a big deal. But Creative Director Virginie Viard has been steadily tapping into a younger, more trend-driven audience for some time now. According to Fashionista, Chanel’s Cruise 2021 collection, which debuted in May, proved that the luxury brand had jumped on the Gen Z bandwagon, revamping signature designs with some ‘90s and early-aughts style details. Rather than diving deeper into fashion nostalgia, perhaps Chanel wanted to pick up on something that’s timely, or feels more “now.” Pelvic cutouts, it is!

But this isn’t just about a trend getting high-fashion approval, it’s also about the relevancy and actual cycle of a trend these days. Pinpointing exactly where a popular style originates has become kind of a blur, and the runway isn’t the only source that dictates our sartorial likings. In fact, it might just be the last place we turn to now. TikTok fuels microtrends on a near-weekly basis, while highly stylized celebrities (like the aforementioned Hadid, Kardashian, etc.) are consistently churning out looks — both IRL and on our social media feeds — that we likely pocket in our brains for outfit inspiration. Meanwhile, Netflix’s Bridgerton is making us channel regencycore and the Gossip Girl reboot is bringing the preppy aesthetic back. We’re pulling what we like from anywhere, everywhere, and designers are trying to keep up with that, too.

Watch Chanel’s Spring 2022 runway show in the video, below.

NEXT UP
Fashion
Bottega Veneta Just Dropped The Next It Bag For Spring
Fashion
The Wildest Front-Row Looks From Couture Week In Paris
Fashion
Apple Martin Is A Chanel Girl Now
Culture
The Cutest Couples At The 2023 Grammys
Style + Culture, delivered straight to your inbox.