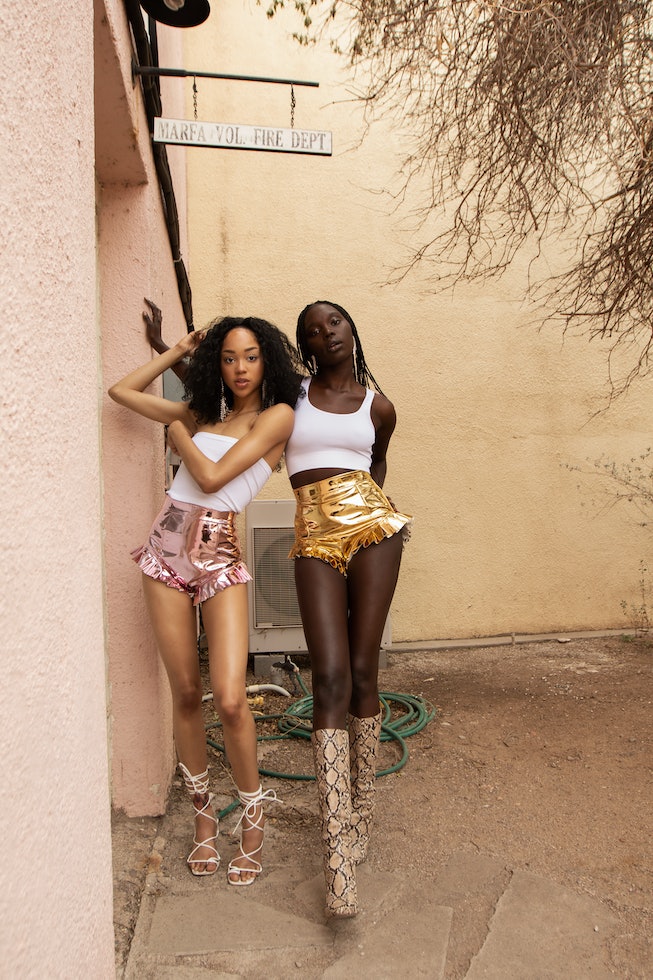 Hot pants are nothing new to the world, but with hemlines and mini silhouettes currently (and literally) on the rise in fashion space, super cheeky high-rise shorts seem like an entirely different trend this time around. And the style’s comeback is all owed to young Houston native Tacharra Perry.

As the head designer and founder of CHARWorkroom, or CHAR for short, Perry has brought hot pants back to the forefront all while reintroducing herself and the brand to the fashion world again. Even though CHAR has been in the spotlight before for its now-archived cropped fur jackets, it’s the High Cut Cheeky Shorts that are having a major moment right. Made from an exclusive vinyl material with a metallic finish, satin lining, and a high-cut pleated hem, these coveted shorts have been spotted everywhere, from ‘fit pics on Instagram to Flo Milli in a recent Spotify campaign. Within just a matter of months, CHAR’s signature shorts have taken over some of the most stylish summer wardrobes, making them the ultimate “going-out” fashion staple for your future party plans.

Before becoming one of the most promising designers of 2021, Perry was inspired to start her brand after reconstructing a pair of denim jeans. “It was during the Tumblr era, and I was into distressing and being creative with different things,” Perry tells NYLON. At that time, she was transitioning from high school to college but she wanted to do more than just continuing her education. Perry then came across her mother’s old sewing machine and was determined to teach herself how to sew. After a handful of YouTube videos, along with help from her mother and grandmother, she sewed her first garment: a pair of shorts.

Fast-forward years later, and Perry is making the “It” item of the summer. “The Cheeky Short started off as a plain pair of shorts that were high-cut, kinda hoochie — you know the girls love a little hoochie-mama situation,” she says with a laugh. “But then I saw these Nike x Sacai shorts that had pleats on them, and I wanted these shorts so bad and they were sold out everywhere. They were literally a basic pair of workout shorts that just had pleats. So I asked myself, ‘What can I do to elevate these shorts and make them my own?’” After seeing a pair of silver Helmut Lang pants that the young designer still lusts over, Perry decided it would be the metallic color and custom vinyl material that would set her work apart.

Although her designs were everything she envisioned, Perry was actually on the fence about whether or not the High Cut Cheeky Shorts would be the right piece to relaunch her brand. But it was her mother who pushed her to release the now-popular shorts and the rest is. And while her item quickly garnered attention from a slew of people and companies, Perry credits the shorts’ claim to fame after being featured on Beyoncé’s Black-owned business directory, which launched in 2020 with the help of the singer’s stylist Zerina Akers. “It’s all so surreal to see how it all came about,” she recalls.

While CHAR’s High Cut Cheeky Shorts have been everywhere, it still shocks Perry to see how much love she has received — and is still receiving. “Our customers and community really inspire me. I built CHAR based on what I would want to see in my closet, but to be honest, we wouldn’t have all of these colors of the shorts if it wasn’t for our customers,” she says.

Perry continues to turn to the community of CHAR for inspiration to run her business, as well as come up with new colors and designs. Anytime you tag the brand on social media, trust and believe that she has seen it and takes note. “I have this one customer who makes sure she tags us every week. She literally wears the silver shorts every week with a new look and the shorts,” says Perry. “It’s so great because I get to see how they like to style the shorts and how different and versatile they can be.”

As for what’s next, Perry is working on making her beloved shorts even more inclusive, adapting her designs and brand to last beyond just a statement-making item. “I am working on making a pair that’s more for the everyday,” she says, with plans to bridge the gap between everyone’s current love of loungewear and the recent rise of night-out style. “I want to bring in other textiles like denim or leather, something that a girl could wear every day if she wanted to.”