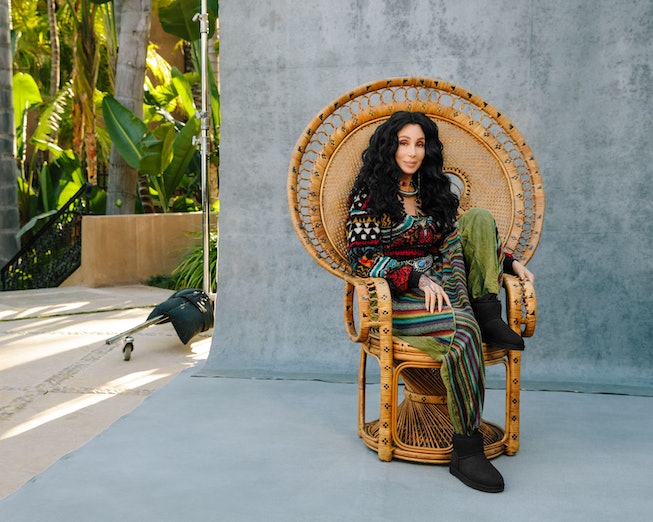 Following the early-aughts renaissance in fashion and recent collaborations with brands like Telfar, UGG is ringing in 2022 with another installment of its “FEEL ___” series, starring none other than legendary singer Cher.

On Tuesday, Jan. 3, the Southern California-based lifestyle brand released new visuals, shot by Los Angeles-based photographer Neil Favila, featuring the “Goddess of Pop” in her Malibu home wearing cozy, statement ensembles paired with some of UGG’s most popular styles, including the classic style boot and fuzzy “Coquette” slippers in black.

“How you ‘Feel’ is the most authentic part of you as a human being,” said Cher in an official statement. “I chose to be an artist. But the hard part is succeeding and failing in front of the entire world.”

The new campaign also includes a video directed by Kauai Moliterno and Michael Barth, with Cher sharing her thoughts on childhood acting dreams, her passion for nature, and some much-needed advice on being unapologetically herself. The superstar is seen watching some of her favorite animated movies in her home theatre with her cat Mala roaming around. We also see her having an equally heartfelt and humorous conversation with her mother over the phone, along with peacefully meditating in her elaborate bedroom.

“I’ve spent a lifetime of people either hating me or loving me; and I mean, you want to be loved, but finally it’s like ‘f*ck it,’” Cher shared towards the end of the video.

You can now shop UGG’s classic styles highlighted in its Spring 2022 campaign on UGG’s website, with items priced between $100 and $170. Plus, view the official imagery of Cher in more detail, below.