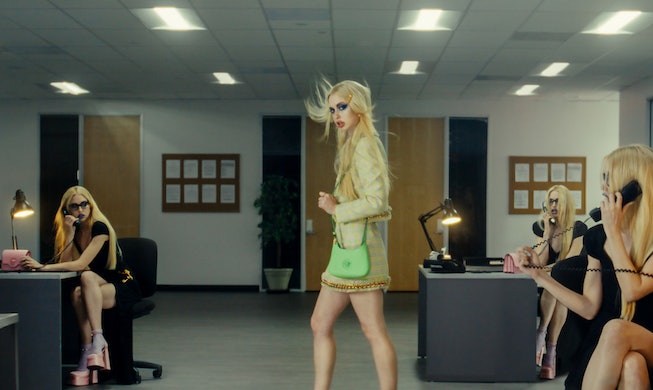 It feels like it was only yesterday that Chloe Cherry debuted as the beloved character Faye in Euphoria. Following the show’s season finale in February, the actress is already a must-watch style star. Her fashion takeover spans from coveted catwalks and front row seats to now, a slew of campaigns, including cult underwear label Parade and, most recently, kicking off the Spring 2022 shopping season for Versace and online retailer SSENSE.

Revealed on Saturday, May 7, Cherry’s new video campaign, stars the actress and model showing off some of Versace’s Spring 2022 pieces fresh off the runway. Taking on a futuristic storyline, the accompanying imagery sees Cherry’s protagonist role mirrored with replicas and she goes head-to-head with a robot over a Versace handbag. Along with her signature pout, the Euphoria star’s designer-name wardrobe includes matching tweed sets and chunky platform heels, as well as cropped silhouettes paired with pleated mini skirts and more. She also accessorized her looks with Versace’s staple accessories, like chain necklaces, handbags, and sunglasses. If you’re interested in shopping some of the new items on SSENSE, prices for the styles begin at $75 for a pair of Greca Athletica socks and range up to $1,425 for handbags.

Starting now, you can cop Versace’s Spring 2022 pieces online at ssense.com. See more of Chloe Cherry in SSENSE and Versace’s new campaign, below.

NEXT UP
Culture
An Exhaustive Breakdown Of The Balenciaga Controversy
Culture
NYLON Party Report Card: Partying With The Stars & 94 Foot Long Whale At The Natural History Museum Gala
Fashion
Rita Ora’s Gills-Inspired Beauty Stole The Show At The British Fashion Awards
Culture
Mowalola Teams Up With Bratz For A Daring, High Fashion Collection