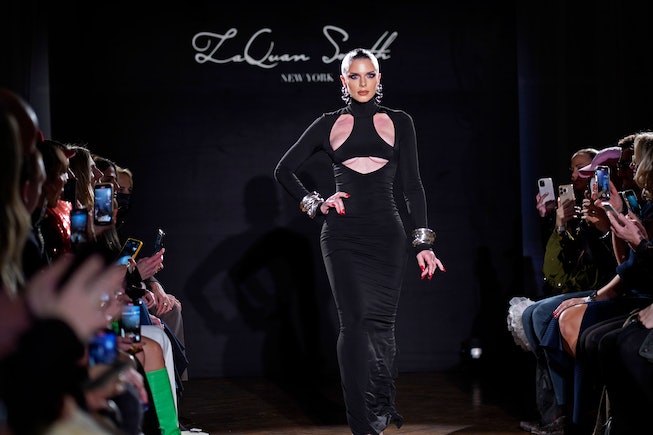 Fashion week wouldn’t be complete without a major runway debut — or two. On Monday night, Feb. 14, LaQuan Smith closed the fourth day of New York Fashion Week with a Fall 2022 show that featured two of the biggest breakout stars right now: Julia Fox of Uncut Gems (and a short-lived rapper romance) fame and Chloe Cherry, who plays the scene-stealer Faye on Euphoria.

The Queens-bred designer debuted his Fall 2022 collection in front of a star-studded front row boasting Lala Anthony, Saucy Santana, Gossip Girl 2.0’s Zión Moreno, and Coi Leray, just to name a few, at the Downtown Association Hotel in Manhattan, which is one of the city’s oldest private clubs. Before the models strutted down the catwalk, Smith kickstarted his showcase with a moment of silence as he dedicated his collection to the late André Leon Talley, who passed away at the age of 73 in January.

Fox opened the runway show wearing a black long-sleeve maxi dress adorned with cutout details at the front, baring her shoulders and chest. She was also styled in chunky silver bracelets and statement earrings, complete with a pair of metallic boots. “Julia has been my girl from day one,” Smith told WWD when talking about his casting decision. “She always comes to me for a nasty catsuit for a night out on the town and it just felt kind of pressy and gaggy and I was like, ‘let’s just do it.’” The Uncut Gems star made her runway debut just hours after news of her breakup with Kanye West, now known as Ye, circulated the internet on top of her Juergen Teller-lensed profile in The Cut.

In an exclusive interview with NYLON back in January, the rising starlet mentions that her future goals include starring in more upcoming projects, including more modeling gigs since she recently signed to Anti-Agency London.

After more than two long years of comfort dressing and loungewear, Smith unveiled his Fall 2022 collection of full-on glam looks perfect for the woman “on the go,” ranging from electrifying ensembles, like sequin silhouettes and shearling coats, to micro-mini skirts and pops of vibrant reds, blues, and gold. “This collection was really about the revival of New York City and celebrating life again,” Smith tells Vogue. “I wanted to create a collection that gave women a sense of hope and celebration.”

NEXT UP
Fashion
The Wildest Front-Row Looks From Couture Week In Paris
Fashion
Apple Martin Is A Chanel Girl Now
Fashion
The Best Celebrity Fit Pics From Paris Men’s Fashion Week
Fashion
Rosettes Are 2023’s Biggest Trend — Here’s How Celebs Wore Them in the 2000s
Style + Culture, delivered straight to your inbox.