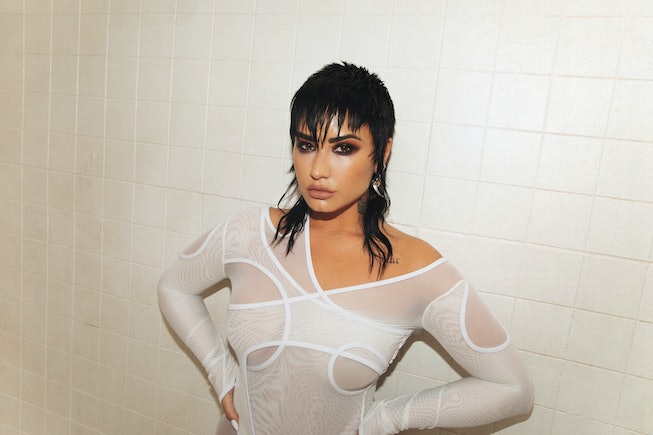 Celebrity stylist Maleeka Moss’ enthusiasm was abundantly clear as she discussed her role in Demi Lovato’s latest music video “Skin of My Teeth.” Known for dressing Billie Eilish and 21 Savage, Moss was tasked with the singer’s sartorial reintroduction into the pop-punk scene, which they were known for during their early days on Disney Channel.

“It was such a fun project to be brought on, especially because I’m a big Demi fan and we’re near the same in age,” Moss tells NYLON over the phone from Los Angeles. “I grew up listening to and watching Camp Rock. I was really plugged into their music growing up like ‘La La Land,’ so [‘Skin of My Teeth’] is a bit nostalgic because it feels like [pop-punk] is definitely where their root is. Doing this shoot was super fun because it was like going back in time and taking a part of them and transforming it into this modern-day version of themselves.”

Following her days at LIM College in New York City and hustling through the 2010s, Moss has become fashion’s go-to creative and the brains behind some of your favorite photoshoots. Her passion for early-aughts magazines and the industry’s deepest archives helped revive Lovato’s punk vision to life as she dressed the singer in a slew of rebellious looks made of latex and leather. “I wanted to have a fun approach with the outfits by adding a bit of that dark energy but making it chic and elevated,” says Moss. “That’s the one thing I wanted to do and make sure that it didn’t look like I was just putting them in a costume.”

Ahead of Demi Lovato’s Holy Fvck album release in August, read more about Maleeka Moss as she chatted exclusively with NYLON about the “Skin of My Teeth” music video, the inspiration behind her styling choices, and more.

It’s exciting to see Demi Lovato go back into their pop-punk era, which I loved during their time on Disney. How did you approach coming up with the outfits for this video? Did you feel any pressure as this is a new era for Demi?

I did feel like there was a lot of pressure just because when working with somebody at that level, they’ve been through so many different eras and versions of themselves, so it’s up to me then, at this point, to not only make sure that I cover the essence of who they were in the past but where they’re at right now because this is the most “at home” music-wise they’ve felt in a really long time. It seems like because this is what they grew up listening to — that classic rock 'n' roll — and I needed to make sure that we’re able to touch base and pull from that reference in order to recreate something that’s more like a modern interpretation and feels very elevated and cool.

So there was a lot of pressure as you work with people and they’ve been through so many other stylists. I definitely felt to deliver to the creative at hand. I worked really closely with the creative director Nick Vernet. We have a very similar aesthetic, so we have a lot of trust in each other and he lets me do my thing.

What was the initial creative process behind styling their looks?

There’s so much that I do. Honestly, the big majority of what I do is research. I’m a research buff. I am literally finding everyone from everywhere. I don’t know if I want to reveal all my secrets but I’ll obviously go on Pinterest and look through all of the archival magazines like Dutch Magazine when Steven Klein was shooting for them back in the ‘90s.

I like to pull references from everywhere, like even just culture around me. When I used to live in New York, I loved the people watching, and being inspired by what other people were wearing and their perspective and take on the the world and life in general.

It usually takes me multiple weeks sometimes, if I have enough time. I will prep a week before in advance and the majority of that is just finding references. Then I’ll mood board it out, walk through it with whoever I’m working with. I like to be involved with everything in the process, like hair, makeup, and everything you could possibly think of because it’s a collaborative effort.

For “Skin of My Teeth,” there are a lot of shiny latex and leather pieces, harnesses, and more. What outfits or pieces were you mostly drawn to for Demi?

I love working with clothing that has interesting textures and details and things that would stand out because I love to layer. I love a monochromatic moment. I usually don’t like to plan things out in advance but working with celebs you kind of have to now, which is a bit interesting for me because I usually like to just go in and see things on the rack and just start putting stuff together. I like to explore and have fun because this isn’t rocket science; I'm not curing cancer. I’m literally playing with clothes.

I love pulling references from early Joan Jett, Patti Smith, Blondie, Debbie Harry, and all of these amazing, powerful women that were just very rebellious and have that punk energy, especially in a male-driven category. I love that these women would take it back and make it their own and that resonated with me, and I wanted to add that in Demi's world because they definitely have this rawness to them where they’re just very naturally and authentically themselves.

What is your favorite outfit from the music video?

I like the performance look, I think that was my favorite. I was literally seeing that whole experience and seeing them in their natural element was incredible. A lot of that was the latex black trench from LA ROXX. We did a bunch of pieces together and we really just created this amazing look that would feature their new incredible body that they’ve been working so hard for, and to showcase that would really emphasize all of their beautiful curves. It would really just embrace the attitude and the bad b*tch that they are.

Were there any memorable moments on set?

There were a lot of moments. The energy was super chill. They’re very professional, which I appreciate, but they also just enjoy the process. I would say the last scene where they were getting wet — because it literally started raining on them and they were probably f*cking freezing in this warehouse — and they were thrashing so hard, I think an earring or something fell off and I’m like, ‘OK, well that’s gone. I don’t know where that is [laughs].’ I also liked the bathtub scene because they were just giving so much badass energy.

The people around them made my life easier and they’re really enjoyable to work with. Their assistants, securities, hair and makeup artists are all amazing and great. I remember while getting ready for the last look and the hair artist needed to go grab something but he could not leave them. So I had to put my hands in their hair to hold it down for like 10 or 15 minutes [laughs]. It’s just really good team energy and everyone helps out.

I love to hear that! How about your favorite scenes in the music video?

It was funny when the creepy guy, the old extra guy who plays the demon character, had to be kicked down on the ground by Demi. But they were so scared about it because he’s old, you know? This guy looks like he’s pushing his 70s, and he’s just like, ‘No, abuse me, I don’t care.’ Demi was wearing these sickening platform boots and they just kept kicking the sh*t out of him. That was a funny moment. There were a lot of good ones, like the water effects. You’re so nervous, too, because you don’t want to nip slip or the latex to get too wet.

You speak really highly of Demi, which I’ve enjoyed listening to as I’ve been a huge fan of them for years.

Seriously, there’s a difference [working with Demi]. There are many artists and there are only a few stars, you know what I mean? I like to work with people that are stars. That’s it. I like to work with people that have something to say and can actually let me do my thing, and it works because there are a lot of people where it’s too much push-and-pull and they don’t have the vision. I will always want to work with people who are just as committed to doing what they love and I’m so lucky and appreciative that those are my clients right now. Demi is definitely one of them, so that’s been loads of fun. I’m very grateful for that.

What's next for you? Do you have any exciting projects in the works?

On top of the artists that I’m working with, Demi has a world tour coming up so I’m very excited about that. The looks are going to be insane. I’m also working with this other artist, Amelia Moore. I do a lot of her creative direction, as well as the fashion, so it’s been really fun. Honestly, I’m just trying to take it day by day and project by project, and just keep creating until I’m over it, so I’m gonna give it my all.

NEXT UP
Entertainment
19 Niche Music Festivals For Every Type Of Person
Entertainment
Meet Amy Allen, The Grammy-Nominated Songwriter Behind Pop's Most Honest Hits
Fashion
Olivia Rodrigo Wore A Sheer Slip Dress To The 2023 Grammys
fashion
All Of The Sexy, Sparkly Outfits From The 2023 Grammys Afterparty
Style + Culture, delivered straight to your inbox.