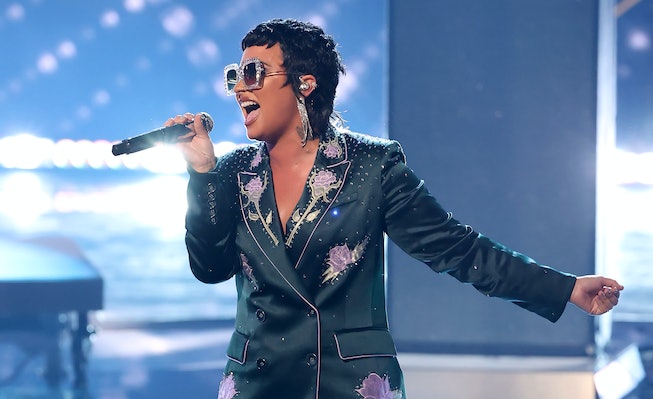 Demi fans are being treated to two major updates from the singer — and that’s saying a lot for a singer who’s famously in the media for a slew of bizarre antics like saying “aliens” is a “derogatory term for extra-terrestrials,” or for pedaling fake Egyptian antiquities. But for now, it’s all about the music for Demi. The singer is following in the footsteps of Avril Lavigne and Olivia Rodrigo (who also followed in the footsteps of Lavigne), and is coming out with their very own pop punk album: HOLY FVCK, which arrives later this summer.

The album makes the first release since 2021’s Dancing With The Devil, and Lovato says it’s been their most fulfilling album experience yet.

“The process of making this album has been the most fulfilling yet and I’m grateful to my fans and collaborators for being on this journey with me. Never have I been more sure of myself and my music and this record speaks that for itself,” Lovato said in a statement. “To my Lovatics who have been rocking out with me since the beginning and those who are just now coming along for the ride, thank you. This record is for you.”

In a peculiar rollout, the album doesn’t release until after the tour starts. Demi’s tour kicks off August 13, while HOLY FVCK is slated to drop August 19. So all the “Lovatics” (is this real?!) out there will simply have to trust Demi’s pop-punk vision.

And we’ll get to hear some of the new music soon. Demi’s first single, “Skin of My Teeth,” drops June 10, and they’ll perform it live on The Tonight Show on June 9. The singer posted a sneak peek of the video on Instagram that shows a collage of grainy film videos showing Demi in the studio and writing songs amidst an earworm belted chorus: “I’m alive by the skin of my teeth / I survived when it got harder to breathe.”

TV might be another thing, but when it comes to music, they haven’t steered us wrong before. Here’s everything we know so far about the HOLY FVCK tour.

WHERE IS THE 2022 Holy Fvck Tour PLAYING?

How to buy tickets to the 2022 Holy Fvck Tour

Tickets for the tour will go on sale beginning Friday (June 10) at 10 a.m. local time here.