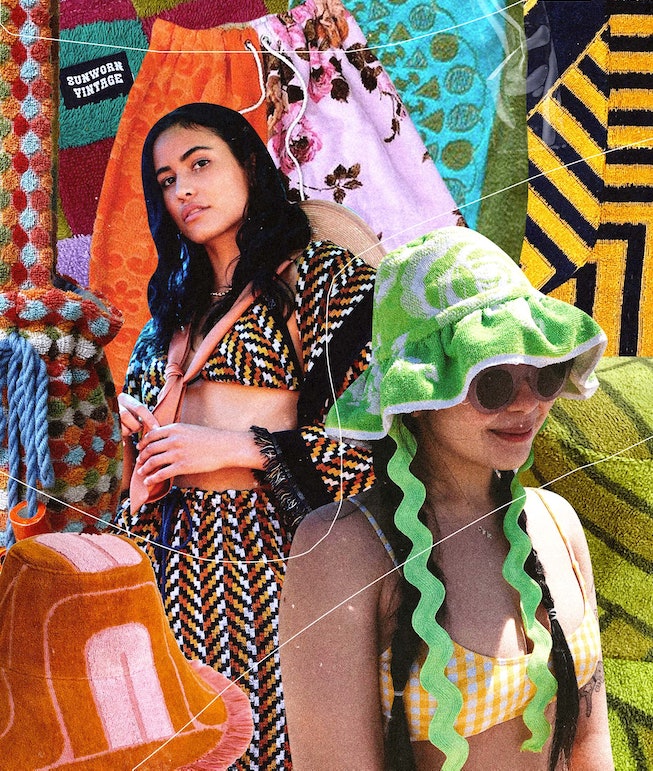 Erin Silvers lights up when she talks about vintage towels. “To me, they look like tapestries and three-dimensional paintings,” she says. Anyone who enters her Rockaway Beach, Queens, shop, Zingara Vintage & Handmade Treasures, gets it: The former bartender and self-taught designer makes luxury loungewear from a collection of technicolor vintage terry cloth towels from Yves Saint Laurent, Emilio Pucci, Ralph Lauren, and more. When we met, Silvers was wearing pants she crafted from 1969 chevron jacquard terry cloth towels that were designed by YSL and woven by legacy home brand Fieldcrest.

On Instagram Live, Silvers’ followers go gaga over ZingaraTerry signatures: bikini tops with drawstring pants and skirt sets, jackets, and dusters. Shay Mitchell wore her three-piece on Dollface, Silvers designed capsules for LoveShackFancy and stylist Micaela Erlanger, and she’s beloved at vintage markets in the Hamptons to Palm Desert. After finding a vintage towel jacket in 2015, she was hooked. In between running her store and being a single parent, Silvers began collecting and repairing terry, studying the dyes, weaves, and tags. Doing boardwalk pop-ups and watching how beachgoers used their towels inspired early designs. Silvers concocts “potions” to clean her materials and hunts down matching towels to create collections she calls “families” with her seamstress — a level of devotion that marks a true investment.

“I create a garment that evokes bright and shiny 1960s and 1970s culture, but it’s never going out of style, it’s never going to lessen its quality,” says Silvers. “I think of them as life partners.”

Last summer, the de facto towel historian even traveled to Kannapolis, North Carolina, home of Cannon Mills — once the largest towel manufacturer in the U.S. and Silver’s favorite towels — to gather material for a book she’s writing on, yes, towels.

Like Silvers, a growing crop of upcycling designers are reworking vintage towels into inclusive, absorbent, and sustainable summer staples — and many say they can’t keep up with demand. Credit dopamine dressing, consumer distrust of fast fashion, and the rebirth of handicrafts during the pandemic. Silvers adds towels symbolize comfort and self-care, from bathing to the beach. “There’s an intimate history with towels because we wrap ourselves throughout our lives in this material,” she says.

Scarcity of materials during World War II led homemakers to create clothing out of tablecloths and curtains, and Cannon published booklets from the 1940s to 1970s on how to cut and sew playsuits, beachwear, and robes from their high-quality handwoven towels. Whether it’s from all-cotton terry, jacquard, or velour, slow fashion designer Dani Des Roches says these textural, dimensional heirlooms “were seen as luxurious fabrics at a crazy reasonable price point.” Her brand, Picnicwear, specializes in accessories made from jacquard towels circa 1950s to 1970s. “It’s understandable why someone would find this in a department store and be like, ‘I don’t want to just dry my body off with this, I want to make a garment out of this.’” Basically, grandma’s towels put today’s towels to shame.

Terry towels and robes inspired the influx of terry cloth apparel in the 1970s, and terry has remained a summer mainstay, from matching sets to bikinis. In 2021, Lyst reported that searches for terry swimwear rose by 66 percent.

Anna Schweihs’ upcycled clothing shop, Everyday Jane, mixes towel patterns and textures on elastic waist shorts with kitschy accents, like a pair combining sculpted and striped-print bath towels and a 1970s old stock mushroom and cacti kitchen towel. Schweihs, a single mother, started her business during the pandemic after being out of work due to health issues. Since then, she’s built a collective of makers and employs a local sewing circle to produce designs out of her Wisconsin home. “Some of the women are disabled, elderly, or trauma survivors, and working from home really helps them,” she says.

Suzie Hinders, a massage therapist who runs Lazy Susan Vintage, dreams up patchwork wide-leg pants that are guaranteed showstoppers. One pair, for example, mixes a sculpted orange bath towel and a velvety pink floral Cannon terry. “It’s madness trying to put towels together to make one garment,” she says. “Everything gets taken off the rack, thrown around. I thrive in the chaos.”

“I want it to be future vintage,” she says. “I want someone 30 years down the road to find it and be super excited.”

Cutting up towels yields a scrap pile that inspires new designs. Dana Andrews started upcycled brand, Sunworn Vintage, after getting laid off as a barista during the pandemic and mostly designs towelwear, including bags, cabana shirts, and jackets. She’s currently working through hundreds of scraps for a batch of patchwork towel-denim pouches and clothing.

“I could make the same dress someone made in the 60s, but I’m doing it differently,” she says. “I’m trying to give people an idea of what clothing can be, rather than buying new.”

Des Roches designs and cuts her styles at home in North Carolina and works with sewists and tailors in New York. A former fast fashion knitwear designer, she says it’s been an adjustment to move away from “the constant churning and peddling of trends.” She’s using that space to focus on size-inclusive towel shorts she recently sold at West Coast Craft. “It's been exciting for me to see them on all different bodies,” she says.

Des Roches works with her mom, a retired boutique owner, to source her towels. Sometimes only finding one towel challenges Des Roches to be inventive with patterns, like for her bijou towel bucket, shoulder bags, and ruched bucket hats.

Another towel hat extraordinaire: re/lax remade out of Sydney. Karina Barker was inspired by her father and grandfather, who in the 1980s lived in cheap floral terry towelling bucket hats they bought at the drugstore. “They were considered deeply uncool and every dad in Australia had one,” she says. Now, Barker’s luxe updates sell out in seconds; she loves using 1940s to 1970s geometrics and florals, and her styles include a wider brim for better sun protection.

She’s also been able to reimagine heirlooms for some customers. “A woman sent me her late mother’s YSL and Pierre Cardin towels and she remembered how special these were — the one luxury item her mum splurged on,” she says. “They’ve been made into hats for herself and her daughter.”

Silvers’ customers get nostalgic, too. One said her towel pieces “take her back to when her grandmother used to wrap terry towels around them and they were living the happy life playing in the sunshine.”

Sourcing vintage towels can be a full-time job, scouring the ecosystem of resellers, estate sales, auctions, and thrift stores. Prices have jumped, designers say, likely due to the reworking trend and the explosion of secondhand and vintage fashion. It’s important to keep the whole process in mind when buying upcycled garments, as well as the rarity of these textiles and the hours of work and love that are poured into each piece.

Still, Schweihs says there’s a real sharing economy in the upcycling space, like when she sent a mushroom towel to fellow upcycling designer, Four Birds Nest, for a pair of shorts.

“There’s enough materials and customers out here for all of us,” she says. “I think the only competition that any of us really have is fast fashion.”