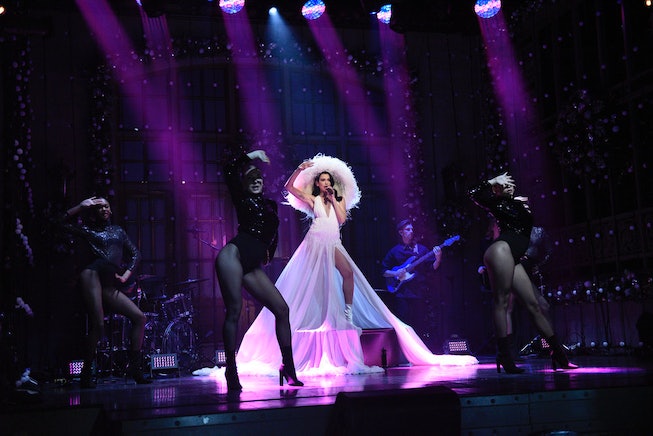 Photo by Will Heath/NBC

If you thought everyone would wind down ahead of the holidays, think again. The past week has brought some of the best celebrity looks we've seen in a while and one particular outfit that sent the internet into a high-fashion frenzy. On Saturday Night Live, Dua Lipa wore Valentino haute couture for her performance of "Levitating," which included a super-long, high-slit white gown with a matching (and almost hypnotizing) feathery ostrich hat that billowed on stage.

"Couture and music have a lot in common," shared Valentino creative director Pierpaolo Piccioli on an Instagram post featuring Dua's look. "They both inspire, mesmerize and shake our emotions creating moments of dreams. Dua knows how to do it and she does it so well! Grazie!"

Megan Thee Stallion got into the holiday spirit in a green matching set with the word "Lucky" emblazoned on the bottom from sleepwear brand Bold & Beautiful.

Gigi Hadid took a winter stroll in New York with her new baby and sister Bella, wearing a black wool coat and cap by Brixton.

Hadid was also spotted on another mommy-and-baby stroll through the city wearing a Thom Browne coat and a very on-trend fuzzy bucket hat from Louis Vuitton.

Prior to her appearance on SNL, Dua Lipa stepped out in New York in a full 8 Moncler Richard Quinn printed look.

During her live performance of "Levitating" on SNL, Dua Lipa's Valentino haute couture look (number 12, to be exact) stole the show.

Spending the holidays in Barbados, Rihanna has us wishing it was bikini season in her HVN Cherry Bra Bikini Top and Cherry Side Tie Bikini Bottoms. She also brought back her wearing-two-bags-at-once style in Chanel.

Naomi Campbell touched down in Nigeria dressed in Ziva Lagos. It looks like she managed to cop a pair of the newly released Nike x Sacai dunks, too.

Hailey Bieber bundled up while out in LA, wearing a pair of cream slippers and a shearling-lined leather jacket.

Yara Shahidi wore a leather Alexander McQueen look during her appearance on The Trumpet Awards.

Her second look was a J.W. Anderson suit with a turquoise belt with long billowing fabric.

Rickey Thompson broke in his new pair of Jeffrey Campbell platform boots the best way he knows how — with a delightful viral video.