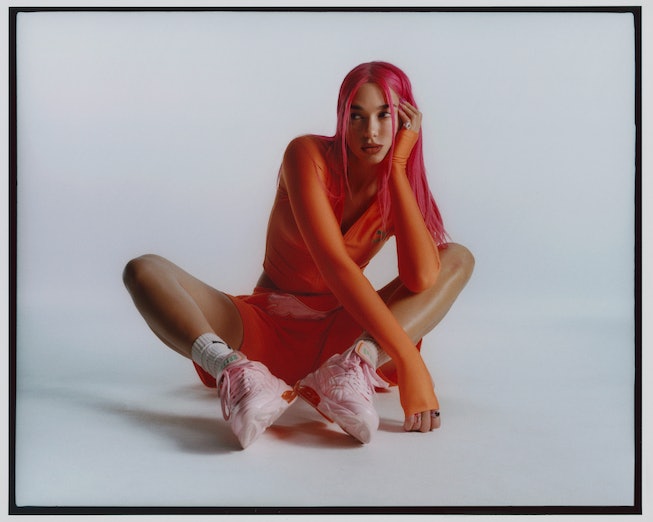 It appears Dua Lipa is keeping busy as of late, especially when it comes to fashion. Following the first launch of her capsule collection with Puma back in December and just days after her runway appearance for Balenciaga’s couture show, Dua Lipa has finally returned with the second collection of her Flutur line with Puma.

This time around, Flutur 2 pays tribute to the history of rave culture, featuring form-fitting pieces and throwback sportswear silhouettes that’ll have you comfortable and ready to dance all night. You’ll be able to shop striped jerseys and long knitted dresses, as well as matching tracksuits, crop tops, mini skirts, and more. There will also be accessories up for grabs, too, like Puma-adorned duffle bags and a full footwear collection, including the brand’s CELL Dome King sneaker and three variations of the coveted Mayze style, including the OG sneaker, a new boot addition, and a metallic version. The upcoming collection is set to arrive in bright colorways, like orange hues and baby pink, plus lots of funky holographic details.

Similar to the first release, Dua Lipa’s signature butterfly motif also makes a cameo throughout the collection, along with the Puma cat logo. The butterfly is not only inspired by vintage rave flyers but it signifies the Future Nostalgia singer and her life as she experienced her own metamorphosis in her career. Prices for the Puma x Dua Lipa Flutur 2 collection range from $50 to $150.

“The butterfly represents transition, metamorphosis, and new beginnings. I felt like in the beginning, when I first started working on drop one, the butterfly already had a lot of meaning for me,” the singer said in an official statement. “Now, going into the second drop, that meaning has just solidified itself and become even more important in my life. It feels like everything progressed and manifested itself in that way.”

You can officially shop the first drop of Puma x Dua Lipa’s Flutur 2 collection starting on Thursday, July 14 at PUMA.com, as well as the Puma NYC flagship store and select retailers. The second part of the launch will be available to shop on Thursday, July 28.

See the full campaign in more detail, lensed by Jordan Hemingway, as well as an exclusive behind-the-scenes clip from the making of Flutur 2, ahead.