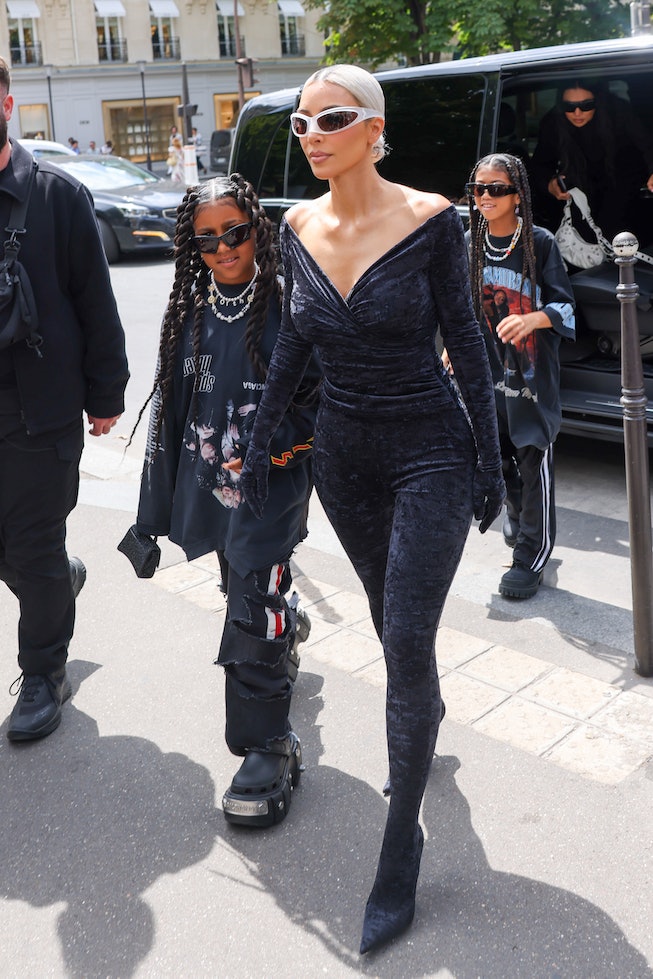 Couture Week is officially underway in Paris and on Wednesday, July 6, Balenciaga’s Demna unveiled his second-ever couture collection for the French fashion house, continuing to showcase his pop-culture obsession with a celebrity-studded runway show.

For Balenciaga’s 51st couture show, which was held in the exact replica space modeled after Cristóbal Balenciaga’s Paris salon from Demna’s couture debut, Kim Kardashian made her first-ever catwalk appearance (as Kris Jenner and daughter North West showed their support from the front row). Actress Nicole Kidman and Selling Sunset’s Christine Quinn also made their runway debut, while singer Dua Lipa, who previously walked for Versace’s Spring 2022 show, modeled for Balenciaga, as well.

First hitting Balenciaga’s latest couture show was reality TV star Quinn as she donned a metallic sequined mini dress with a flowing train following behind her and styled with the brand’s signature heels and long black gloves. Moments later, Lipa was captured in a one-shoulder, asymmetrical yellow mini dress, which also came with a train falling on the side, plus a pair of full-length black gloves.

Balenciaga‘s hottest muse of the moment, Kardashian, finally emerged on the runway, as she sported a body-hugging, glossy black dress adorned with a low-cut neckline. Her look was completed with reflecting metallic heels and her platinum blonde hair tied back in a sleek bun. Soon after, Kidman appeared wrapped in an elaborate liquid-like gown made from silver-coated silk taffeta.

Though Demna has been featuring celebrities in his Balenciaga campaigns lately, this isn’t the first time he’s enlisted famous faces to walk his runway shows, too. During Paris Fashion Week back in October 2021, Balenciaga’s Spring 2022 show not only featured a short film from The Simpsons, but Elliott Page, rapper Offset, and more modeled the collection.

Watch the latest celebrity stars in action as they hit the catwalk for Balenciaga’s Fall 2022 couture show, below.