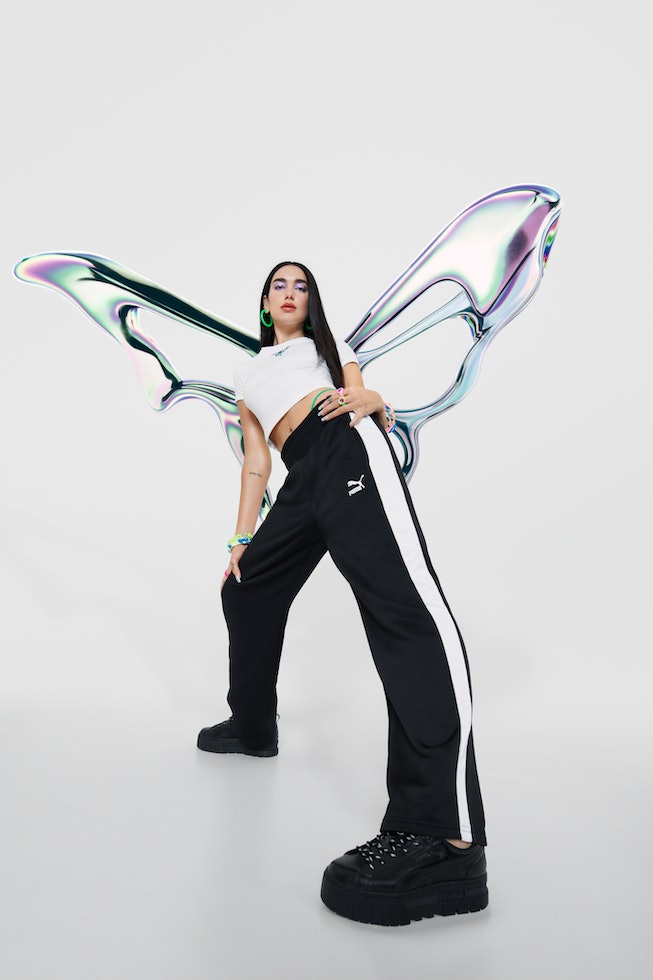 From making her runway debut and launching a curated newsletter, Dua Lipa knows exactly how to win us over with surprises, and this time was no exception. On Wednesday, Dec. 8, the Future Nostalgia star announced via Instagram that she will be launching her first-ever capsule collection with Puma.

Lipa first joined the global sportswear and lifestyle brand back in 2020, after signing a multiyear contract as the new face for Puma's womenswear line. And now that she’s already starred in a campaign for its Mayze sneaker, the singer is taking her partnership to the next level with the first drop of the newest collection on Saturday, Dec. 18.

The four-piece, limited-edition capsule, titled “Flutur,” is a sneak peek of what’s to come in 2022 with the release of a full line from Lipa and Puma. The upcoming release is set to consist of both apparel and footwear inspired by ‘90s fashion and will feature a new iridescent butterfly logo that is symbolic of Lipa’s collab with Puma, and can be found printed on oversized hoodies and baby tees, as well as Lipa’s own “Flutur” version of Puma’s Mayze sneaker.

“For me, butterflies are more than just beautiful creatures, they represent so much, like transformation, hope, and metamorphosis, and over this past year, the butterfly has become especially symbolic and meaningful to me,” said Lipa in an official statement. “The name of the capsule, ‘Flutur,’ is the Albanian word for butterfly. I chose it to pay homage to my heritage while also celebrating this new beginning with Puma.”

If you’re looking to shop the highly-anticipated pieces soon, we’ve compiled everything you need to know and how to cop Dua Lipa x Puma’s new capsule collection, ahead.

What is the Dua Lipa x Puma “Flutur” Capsule collection?

The Dua Lipa x Puma “Flutur” capsule collection is a preview of a bigger, full line to drop in 2022. For now, the limited-edition release consists of four staple items, all of which are adorned with an iridescent butterfly logo created by Lipa herself. The easy-to-wear wardrobe pieces include black and white baby tees inspired by the early ‘90s and a comfy black oversized hoodie.

A standout item from the “Flutur” capsule collection is the Mayze sneaker, which was actually modeled by Lipa in a campaign earlier this year and has been reimagined by the pop star for the collaboration. You can expect the black leather sneakers to come with a stacked midsole and Lipa’s new signature butterfly logo on both the tongue and the insole, along with two lace options, as well. The four-piece collection ranges in price from $30 to $110.

When and where can I buy the Dua Lipa x Puma “Flutur” capsule collection?

The Dua Lipa x Puma “Flutur” capsule collection will be released globally starting on Saturday, Dec. 18, on Puma’s website, in Puma stores, and in select retailers. While we wait to get our hands on the upcoming line, you can get a preview of “Flutur” ahead of time with Lipa’s new campaign, lensed by Daniel Sannwald, below.